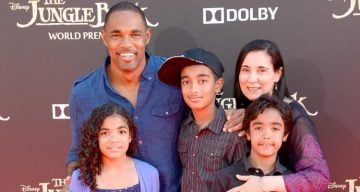 Who is Jason George’s wife? With the Grey’s Anatomy spinoff, Station 19, premiering tonight, fans are looking to know more about Jason George’s personal life. We know enough about George and his Grey’s character, but what about the actor’s wife in real life?

There’s a new show in town, and it looks like it’s going to be on fire—literally! This time, the new Shondaland series will revolve around firefighters instead of doctors, lawyers, or politicians—and fans have been anxiously waiting for its premiere! But will it be another Shonda Rhimes hit?

Fans are more than excited to see Ben Warren transfer from Grey Sloan Memorial down the block to Station 19. And even though fans can’t wait to see Jason George take on this new role as a firefighter, many are curious to know about the star’s real-life romance.

Our Vandana Khanna wiki has all you need to know about his off-screen love!

Who Is Vandana Khanna?

Vandana Khanna may not be nearly as well-known as her husband, but she’s famous and respected in her own field. She was born in New Delhi, India and grew up in Falls Church, Virginia.

The New Delhi native is an author in poetry and has won several poetry prizes for her collection of work. She has quite a few published pieces under her belt, such as Train to Agra (2001), Afternoon Masala: Poems (2014), and The Goddess Monologues (2016).

Khanna has also taught English and Creative Writing classes at colleges and universities all over the country, including Indiana University, Pitzer College, and the University of Southern California (USC).

Khanna’s first meeting with George may not have been the norm, but it was something she will never forget. In a clip of daytime talk show The Real, George told the hosts exactly how he met his wife.

They both went to the same school (University of Virginia) together and were in the same dorm area. We can only imagine that this puts Vandana Khanna’s age at around 46, like her husband.

George was with his friends when he started acting like an “ape” (he mentioned King Kong) and decided to sweep his future wife of her feet and put her over his shoulders!

Well, we guess that must have sparked her interest! The two have been married since 1999 and live in Studio City, California, with their three children: Jasmine and Arun (twins), and Nikhil.

Last year, George was a guest on The Steve Harvey Show and was asked some hard-hitting questions about marriage.

Knowing the two had been together since college (a feat in itself), Harvey asked, “How do you make it work that long, especially out here in Hollywood?”

George admitted Hollywood is crazy but said that the key to their marriage is to “fight fair.” While some may have been confused, George went on to explain what he meant, and it really made a lot of sense!

“We fight fair,” George said. “You’re gonna have fights because if you’re not having fights, you’re not being honest. So when you fight, you’ve gotta be fair about it.”

Harvey, still confused, asked him to explain what that meant.

“When you settle it, don’t say it’s settled if it’s not, and then bring it up again six months later,” the actor explained.

Harvey, who clearly just had his mind blown, wanted to take a minute to have that sink in, quipping that a lot of men need to “hear this!”

The audience cheered, agreeing with his wise words. Check out the clip below!

Shondaland is getting bigger, now that there’s a new show in town! We’ve seen doctors, politicians, and lawyers, so it only makes sense that the network has a show based on a fire station, right?

As we all know, George has played Dr. Bailey’s second husband, Dr. Ben Warren, for the last six seasons on Grey’s Anatomy. He started on the show as a recurring guest in 2010 and then landed the role for a full-time gig until now.

But now, he’s moving! Ben Warren decided to put the doctor life behind him and decided that firefighting was his true calling instead. He is moving three blocks down to join Station 19, where he’s going to trade his scrubs for a full-blown firefighter suit!

“He’s gotta start from the ground and move up,” showrunner Stacy McKee said to E! News. “That is legitimately how you would have to enter the firefighting force, and in fact I kept asking our consultants questions like, ‘Yes, but if you were already a surgeon, and you already had experience, would that give you a leg up in the training?’ And the answer is universally no. Nobody gets special treatment [sic].”

Ben may be back at the bottom of the totem pole, but he’s certainly willing to put in the work! So we can expect plenty of drama from him. And, the pilot episode is said to guest star Ellen Pompeo’s, Meredith Grey!