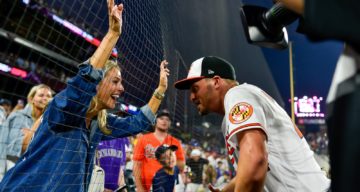 Trey Mancini of the Baltimore Orioles celebrates with his girlfriend Sara Perlman after the 2021 T-Mobile Home Run Derby at Coors Field on July 12, 2021 in Denver, Colorado.(Photo by Dustin Bradford/Getty Images)

Trey Mancini has been on a roller-coaster ride in recent years. He overcame colon cancer and made a triumphant return to the Baltimore Orioles, with whom he signed a new deal. The entire time, Trey Mancini’s girlfriend-turned-fiancee, Sara Perlman, stayed by his side. They were in the beginning stages of their relationship when Perlman stepped into the role of his caretaker. But she rose to the occasion, and it’s why fans are in awe of her. She’s also got quite the spectacular resume as a sportscaster herself. We reveal more of those details in this Sara Perlman wiki.

Sara Ashley Perlman was born on September 16, 1994, and hails from Weston, Florida. She is one of three children born to Robert Perlman and Pamela Perlman.

She grew up in an athletic family. Her father, Robert, played soccer and her mother, Pamela, played tennis at FAU. Her brother, Zack Perlman, played football at Penn.

Sara and Zack also have a sister, Alexandra Perlman, who works in Miami. Zack is an entrepreneur with multiple businesses in Miami.

After graduating from St. Thomas Aquinas High School in 2013, Sara Perlman attended American University. Before receiving her bachelor’s degree in broadcast journalism in 2015, she had maintained a 3.82 GPA, played on the soccer team, was part of the campus publication, and did internships at SiriusXM and Comcast.

Soon after, Perlman began pursuing a bachelor’s degree in telecommunications at the University of Florida and also got her start in sportscasting at ESPN. She was part of the campus coverage at ESPNU and was an anchor on ESPN radio.

Perlman was also the sports anchor on WUFT and a sideline reporter for the Fort Lauderdale Strikers. She was a sports anchor on CBS Interactive and a reporter on UFC Fight Pass before completing her degree in 2017.

Perlman went to Baltimore in 2017 when she was assigned as a reporter for the Baltimore Orioles and the Washington Nationals on MASN. In 2019, she joined NBC Sports, where she initially co-hosted The Daily Line. Since 2021, she’s been hosting Sports EDGE.

Sara Perlman met Orioles baseman Trey Mancini in 2017 when she was with MASN. She revealed in an Instagram post that after she left Baltimore, Mancini probably missed the time they spent together in their interviews because he contacted her and asked her on a date.

Just when their romance had begun, Mancini was diagnosed with colon cancer. He missed the 2020 season and Perlman stayed by his side throughout his treatment.

Mancini returned to the Orioles in the 2021 season with a clean bill of health. And he had more good news to share. In November 2021, the couple broke the news of their engagement to their social media followers.