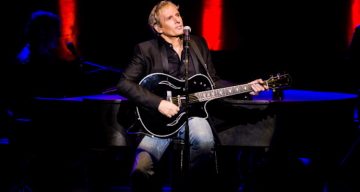 Who Is Michael Bolton’s Ex-Wife?

The “When a Man Love A Woman” singer married McGuire in 1975 but they divorced in 1990, which put an end to 15 years of marriage. They are parents to three daughters: Isa, Holly, and Taryn.

McGuire’s exact age is unknown, but it would be reasonable to assume she’s around the same age as her 65-year-old ex-husband.

They married when Bolton had begun his music career and had yet to become famous. Before the end of their marriage, they went to couple’s counseling. Though it didn’t work out for them, Bolton recommends counseling for couples.

She Resides in Connecticut

Since their divorce, McGuire has kept a low profile and stayed away from the spotlight generated by her ex-husband’s fame. She lives in East Haven, a town in New Haven County, Connecticut, where she’s originally from. Michael Bolton is also a native of New Haven.

Bolton had custody of their daughters, who grew up with him in Westport, Connecticut. Now, his work takes him all over the world while his daughters have their own lives and businesses in Connecticut.

Back when McGuire and Bolton were married, she was an exercise teacher. A dancer from a young age, fitness has been a big part of her life. She dreamed of becoming a lawyer, but she found her true calling as yoga teacher.

After the divorce, she returned to her hometown of East Haven for what was supposed to be a short stay. But her friend thought the town needed a fitness maven like McGuire. She has since stayed and continued to work as a fitness and yoga instructor.

She initially taught aerobics and dance and expanded into yoga classes. She now teaches yoga at the Payne Whitney Gym, East Shore Senior Center, and Quinnipiac University. Her classes are so popular that she had to get permission from the city to teach up to 130 students at Town Beach.

Her yoga classes have expanded throughout East Haven with multiple instructors and courses. She also teaches yoga in Isa’s Loved Boutique every week.

Meanwhile, Maureen McGuire continues to teach yoga in her hometown, enjoy being a grandmother, and help out her daughters in their stores. She hasn’t been active on her Facebook page since 2017, but she has occasionally mentioned Michael Bolton, indicating there’s no bad blood between the exes.