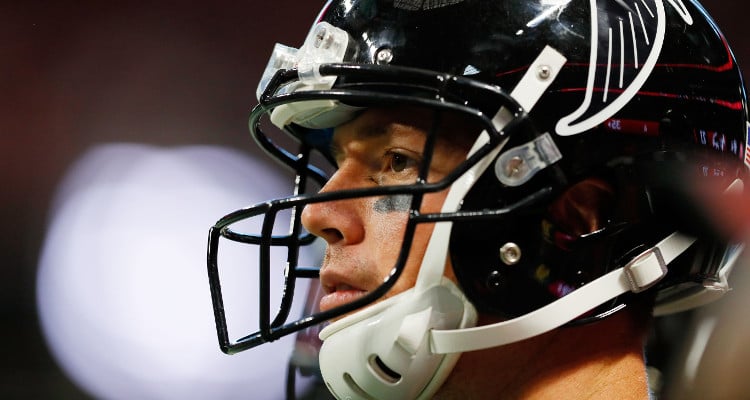 Atlanta Falcons quarterback Matt Ryan led his team to a 34-20 win against the Tampa Bay Buccaneers on Sunday. As the Falcons eye a spot in the playoffs, Ryan was instrumental in the big win. His wife, Sarah Marshall is also in the spotlight after sharing some exciting news on Instagram a few days ago. Keep reading to find out more!

Football star Matt Ryan led the Falcons to a memorable win against the Buccaneers, and fans want to know more about the brilliant wide receiver. He is married to Sarah Marshall. Though Ryan’s wife shares a name with Kristen Bell’s character from the 2008 movie Forgetting Sarah Marshall, the real Sarah Marshall is a former basketball star who has sports running through her veins. She recently took to Instagram to reveal that the couple are expecting twins!

We have the scoop on Matt Ryan’s wife in our Sarah Marshall wiki.

Born in Portland, Maine on July 23, 1985, according to her Boston College Eagles bio, making Sarah Marshall’s age 32. She now lives in Atlanta, Georgia.

Marshall was a born athlete and played many sports while was studying at Catherine McAuley High School in Maine.

In addition to basketball, she was also a soccer player and track athlete. Her other accomplishments include an induction as a member of the National Honor Society, and recipient of the health achievement award.

Marshall was a star basketball player in high school and has a fantastic resumé, including being a twice named Maine Gatorade Player of the Year recipient.

Her impressive senior year stats show that she averaged 20.0 points, 5.5 rebounds, and 5.9 assists. Now those are some impressive numbers!

Marshall was also named MVP twice in her high school basketball career, and is her school’s all-time leading scorer.

In honor of playing pick up for the first time in a long time last night; a #TBT from freshman year at FHS! (This ones for you @kbhall82 #WhiteTee)

She kept her basketball dreams alive, although in a non-playing capacity. She joined the WNBA’s Atlanta Dream as a sponsorship sales consultant in 2013.

#3. Marshall and Ryan are College Sweethearts

Both Ryan and Marshall graduated in 2007, and soon after, he joined the Atlanta Falcons.

The couple married in 2011, and Marshall is often seen cheering the Falcons star at their games.

Sarah Marshall’s Instagram is filled with pictures of her main man. We just love how adorable this sports power couple look!

Find someone that makes you laugh, they say…lucky Matt!? #TBT

The Ryan-Marshalls will have two brand new additions this spring! The couple are expecting twins in April 2018. We can imagine how excited the Falcons fans must be about the announcement!

It’s been a long road, but Matt and I couldn’t be happier to announce that we are expecting twins! We are anxiously awaiting their arrival in April. There’s just something about the number 2 in our house, I guess?‍♀️? ? cred: @maggiemryan

Marshall shared a news on Instagram with the caption, “It’s been a long road, but Matt and I couldn’t be happier to announce that we are expecting twins! We are anxiously awaiting their arrival in April. There’s just something about the number 2 in our house, I guess.”

She will soon be joining the NFL twins club with one of her best friends, Kelly Stafford, wife of quarterback Matt Stafford. Looking back at this picture Marshall posted in June makes us wonder if she knew something ahead of time.

Don't mind me @kbstafford89 (and Matthew), I'll just be staring at your girls all day long! So in love with these two!

Marshall’s fan following is steadily rising on Instagram. She has over 30,000 followers and loves posting about her life with Ryan and her family in Maine.

We also love the pictures of fun times she shared with Matt and Kelly Stafford. One of Sarah Marshall’s hot pics has them chilling in a golf cart in Cabo, Mexico!

As the Falcons look forward to their next game, and a possible shot at a spot in the playoffs, we know Marshall will be right there by her husband’s side. What an exciting time to be a Falcons fan!

We wish the parents-to-be all the best in their journey together!