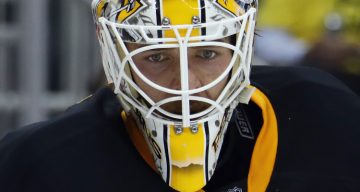 Nobody can stop talking about Matt Murray. The 23-year-old Canadian-born Pittsburgh Penguins goalie had back to back shutouts during the game against the Nashville Predators on Sunday night. After setting two rookie records in one game, his family and girlfriend must be extremely proud of him! If you are wondering who Matt Murray’s girlfriend is, then keep on reading.

Pittsburgh Penguins won against the Nashville Predators on Sunday night’s Stanley Cup championship. Matt Murray celebrated his second Stanley Cup win after defeating the Predators during Game 6. After their win, Murray said, “My heart rate is still pretty high from the game. It hasn’t stopped since I’m trying to relax a bit here. I think it will start to sink in the next few days.”

Murray celebrated his win with his team and his loving, longtime girlfriend. Here is everything you need to know about her in our Christina Sirignano wiki.

They Were Dating Before Murray’s NHL Career Took Off

This beautiful couple were dating while Murray was still playing junior hockey. In fact, it looks like they were high school sweethearts, according to a photo from Christina Sirignano’s Instagram account! Sirignano has been very supportive of her boyfriend’s career and has supported him from his time playing for the Ontario Hockey League to his NHL start with the Pittsburgh Penguins. Murray signed a three-year entry-level contract with the Pittsburgh Penguins on September 4, 2013. His first full season was in 2014-15, where Murray set an AHL record for the longest shutout streak, blocking goals for 304 minutes and 11 seconds. On December 19, 2015, he made his NHL debut.

Also Read: Auston Matthews Wiki: The Rookie Who Made a Historical NHL Debut

Sirignano is from Murray’s Hometown

Both Matt Murray and Christina Sirignano are originally from Thunder Bay, Ontario, which is where they met. Sirignano currently lives there, and enrolled in Lakehead University in 2013. Though her boyfriend is typically out of town, Sirignano tries to go to as many of his games as possible.

She is a Major Animal Lover

Me and my piranha ?

Sirignano actively supports the Thunder Bay and District Humane Society. In February this year, she auctioned off one of Murray’s hockey sticks to support their local humane society. The hockey stick sold for $1,085, which was used to help the overcrowded shelter provide food, medication, and a place for the animals to live while they waited to be adopted.

The couple even has an adorable Newfoundland dog named Beckham, whom they adopted during the 2016-17 NHL season. When the couple are not posting pictures of Beckham on their personal social media pages, they run their dog’s Instagram account. Beckham is highly loved by his mother and father. He divides his time between Thunder Bay and Pittsburgh, and will be celebrating his first birthday on October 7, 2017.

She is Very Supportive of Her Boyfriend’s Career

When the Pittsburgh Penguins won the 2016 Stanley Cup, Christina Sirignano was in the stands cheering them, and her boyfriend, on. Nothing changed this year as Matt Murray’s girlfriend watched as her boyfriend and the Penguins took the win over the Predators.