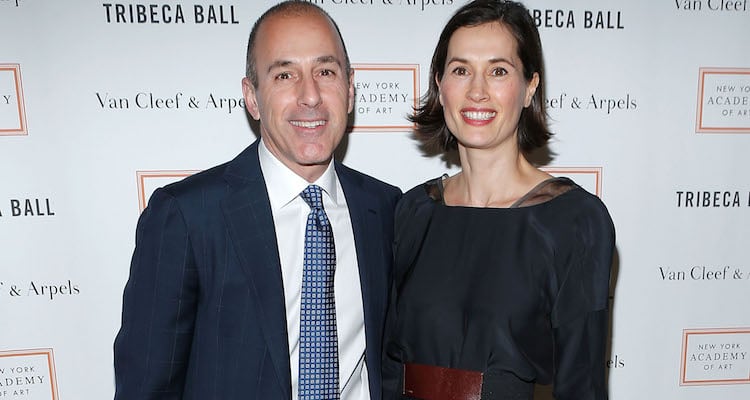 NBC News’ Matt Lauer, the “cornerstone” of the Today show for over two decades, was fired today for “inappropriate sexual behavior” in the workplace. He was revered as an icon in television news, and now, investigations into the allegations have caused him to lose his job and possibly end his career. But is Matt Lauer married? Who is Matt Lauer’s wife? Check out our Annette Roque wiki for the details.

Lauer, 59, was informed of the decision Tuesday night before he went to sleep. He was apparently under investigation by reporters for The New York Times and Variety for weeks, and although this is the first complaint against him, there was considerable reason to believe “this may not have been an isolated incident,” according to NBC News Chairman, Andrew Lack. He is the latest in a string of high profile men in the media to be brought down by allegations of inappropriate sexual behavior. The torrent of investigations began when two major news sites, The New York Times and The New Yorker, reported on allegations against renowned Hollywood producer, Harvey Weinstein.

Savannah Guthrie made the announcement at the beginning of Today, saying “This is a sad morning at Today and NBC News. As I’m sure you can understand, we are devastated. I’m heartbroken for Matt.” She also said she was heartbroken for the woman who accused Lauer, saying it was “long overdue” that women should feel safe to speak out against the sexual misconduct of men. A statement regarding the situation said, “On Monday night, we received a detailed complaint from a college about inappropriate sexual behavior in the workplace by Matt Lauer. As a result, we’ve decided to terminate his employment.”

But the investigation into the journalist has dug up some terrible information about his relationship with his wife. Matt Lauer and Annette Roque, a former Dutch model, married in 1998. Lauer and Annette Roque’s kids include sons, Jack Mathew Lauer and Thijs Lauer, and daughter Romy Lauer. Model Annette Roque, age 51 (approximately), is from the Netherlands. She filed for divorce once in 2006, accusing him of “cruel and inhumane treatment,” and “extreme anger and hostility.” But a few weeks after filing, she changed her mind and subsequently withdrew the divorce papers.

Here is the official statement from NBC News Chairman Andy Lack in regards to the firing of the long-time anchor:

On Monday night, we received a detailed complaint from a colleague about inappropriate sexual behavior in the workplace by Matt Lauer. It represented, after serious review, a clear violation of our company’s standards. As a result, we’ve decided to terminate his employment. While it is the first complaint about his behavior in the over twenty years he’s been at NBC News, we were also presented with reason to believe this may not have been an isolated incident.

Our highest priority is to create a workplace environment where everyone feels safe and protected, and to ensure that any actions that run counter to our core values are met with consequences, no matter who the offender.

We are deeply saddened by this turn of events. But we will face it together as a news organization — and do it in as transparent a manner as we can. To that end, Noah and I will be meeting with as many of you as possible throughout the day today to answer your questions.