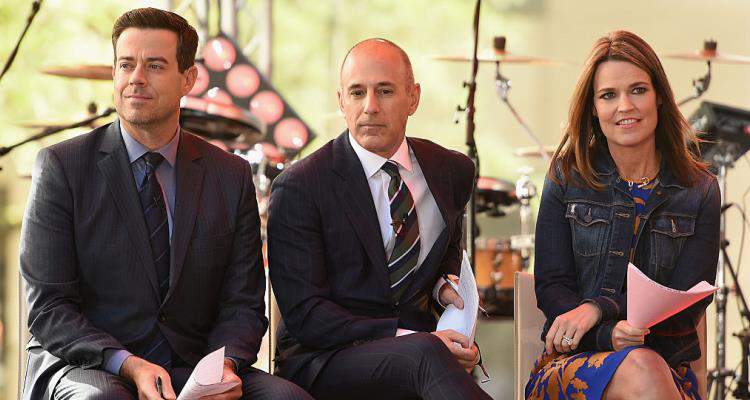 Updates on Matt Lauer continue to drag out, with no official names for Matt Lauer’s replacement revealed, at least not yet anyway. The scandalized NBC Today show host was fired in late November, after accusers complained about “inappropriate sexual behavior.” Rumors of Lauer’s potential replacement included Willie Geist, Craig Melvin, and Megyn Kelly, among others. But is there any news of a solid replacement yet? Read on to find out!

Matt Lauer Update: Is He Still with His Wife?

Matt Lauer, whose salary was tipped at nearly $28.0 million a year, was spotted on December 23 at his private Sag Harbor, N.Y. horse farm, according to an online report. He was reportedly with his wife Annette Roque, 52, as well as their 14-year-old daughter Romy.

The couple reportedly removed their wedding rings in early December, just after the NBC anchor was fired. They’ve been married since October 1998, and have three children together. According to online reports, Henri Roque (Annette Roque’s father) told the media that the couple have no plans to reconcile and are headed for divorce. Apparently, they are currently leading two very separate lives.

Reportedly speaking from his apartment near Amsterdam, Henri Roque told DailyMail.com exclusively, “I have no words for her husband. What he has done is bad. Everybody feels betrayed.” He added, “She is not going to stay with him and work it out. They are not together trying to work it out.”

Annette Roque first filed for divorce in 2006, but halted proceedings. It was rumored that Lauer offered her $5.0 million to remain in the marriage in order to protect his public image.

On December 24, TMZ reported that Lauer was spotted in the Hamptons with his two sons, Jack, 16, and Thijs, 11.

When MSNBC Morning Joe host Willie Geist was tapped to replace Lauer, he denied the rumors saying, “I haven’t had a word of conversation with anybody [at NBC] about it. So I don’t know. I just think that’s a fun parlor game.”

With fans of the show going into a frenzy of speculation about who could be Lauer’s new replacement, it’s no surprise that many names have been tossed out there for the running. Today weekend co-host, Craig Melvin was also rumored to be considered for the position.

NBC has not taken recent developments lightly, as the network has reportedly redrafted workplace policies to allow the network to terminate any employee who witnesses and fails to report inappropriate behavior.

According to sources, “Staffers have been told that if they find out about any affairs, romances, inappropriate relationships or behavior in the office, they have to report it to human resources, their superior or the company anti-harassment phone line.”

Lauer’s co-anchors, Savannah Guthrie and Hodo Kotb were completely floored by the allegations as they read a staff memo on air when news first broke of Lauer’s firing on Wednesday, November 29. Since then, it seems all anyone can do is speculate who will replace Matt Lauer (or who could be next!).

Several unnamed women have alleged sexual harassment claims against the former Today show host. The allegations from Lauer’s co-workers alleged that he subjected them to unwanted advances. One NBC employee alleged sexual misconduct from Lauer throughout 2014, inclusive of the Winter Olympics that were held in Sochi, Russia.

But not everyone is against him; one of Lauer’s own Today show colleagues maintained that no evidence of predatory sexual behavior was proven. An insider source stated that Lauer viewed the affair in question as a “consensual relationship.”

There are further reports of affairs with Matt Lauer from other women. Addie Zinone, a former production assistant on the Today show, detailed a month-long consensual relationship from July 12, 2000, that allegedly started when she was 24 years old.