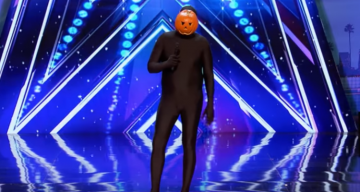 If you’ve been keeping up America’s favorite (highly entertaining) competition show, then you’ve probably heard of America’s Got Talent’s Dancing Pumpkin Man. Yes, Dancing Pumpkin Man, or Matt Geiler, as he’s otherwise known! With his wacky dance moves mixed with his mind-baffling pumpkin head, he’s the talk of the town from season 12 of the show! If you want to learn all about this hilariously awkward contestant, keep on reading our Matt Geiler wiki!

Who is the Dancing Pumpkin Man? He’s an Omaha, Nebraska native, who broke the Internet with his crazy appearance on AGT. Matt Geiler’s age is 42, and within his first few minutes on stage, he told the judges that he has been married for over 16 years, with two children, and a dog named Calvin. When Simon Cowell asked about his purpose for being on the show, Geiler replied, “To spread joy through dance and to ascend to a position at the front of the modern avant-garde.” He then proceeded to dance to Rockwell’s “Somebody’s Watching Me,” and everyone was impressed–except Simon. Wonder what he looks like beneath the mask? Check out this picture of Dancing Pumpkin Man’s face!

TONIGHT! Who's gonna #MakeMattSING!? Hilarious songs and freestyles from YOUR suggestions at 9pm CST/7pm PST on FacebookLIVE! See what Dancing Pumpkin Man does in real life! #musicalimprovcomedy #freestylerap #letsgetweird www.mattgeiler.com

The Genesis of the Dancing Pumpkin Man

In 2006, he was the anchor of the nightly newscast KXVO. The program had a budget of $1,000 a year, to create 22 minutes of programming on each weekday. The cast, including Geiler, often had to improvise the last few minutes to fill the show. But what does this have to do with Dancing Pumpkin Man? Leading up to Halloween that year, the producers pitched several ideas, including adult men falling in a pumpkin patch, a fake murder mystery, and playing dress-up as grandmothers for a cooking show. At this point, Geiler chimed in pitching the following idea: “I’ve got this one thing where I put on a unitard and a pumpkin head and dance at people’s graves.” He called it “Happy Jack: The Grave Dancer.” Although the cemetery dancing never took place, the idea took off.

He got dressed up and danced in front of a green screen, and the station pre-recorded the segment to feature it for live coverage on October 31, 2006. Nothing really happened, until several years later when YouTube started to gain momentum. Three years later, the video was featured on BuzzFeed, Videogum, and Entertainment Weekly, and a year later, even Huffington Post took notice! Before long, Geiler’s funky dance had gone viral, with over a million views! But his Internet fame didn’t stop there. In 2015, on the day before Halloween, BuzzFeed brought him back with a series of Dancing Pumpkin Man gifs, and they continue to be amongst GIF and meme faves today!

If middle-aged men in unitards and masks dancing on stage is your thing, check out the video below to see Geiler bust a move. Here he is, in all his weird, gyrating, pumpkin head glory.

Happy Monday little babies! Here's a little more realness from yours truly about the joys of the dance! #agt #dancingpumpkinman #legendinmysparetime www.mattgeiler.com