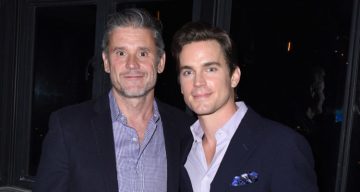 Matt Bomer, who is best known for his roles in Magic Mike and White Collar, will be hosting a fundraiser for openly gay presidential hopeful, Pete Buttigieg, soon. Championing Buttigieg is certainly a cause close to Bomer, who is married to Simon Halls. Matt Bomer’s husband Simon Halls is a major power player in showbiz. Yet he manages to keep a low profile, much to the curiosity of many. If you’re one of those dying to know about the guy married to Bomer, our Simon Halls wiki is here to save the day.

Simon Halls Is from Canada

Simon Halls, who was born on January 12, 1964, hails from Toronto, Canada. After graduating from Crescent School, a private day school in the Ontario capital, in 1980, he enrolled in North Toronto Collegiate Institute.

In 1981, Halls came to the States where he enrolled in the University of Southern California. He’s been in the U.S. since then.

Happy birthday to the greatest man I know! So thankful to have you in my life, and for all the love and joy you bring to our family. And thank you to @cakeandart for this kickass cake! @halls.simon #birthdaycake #studio54 #dianaross #rudolphnureyev #birthdaylove ❤️❤️❤️❤️❤️🎂🍾🎈

Simon Halls Is a Big-Time Publicist

After graduating from USC, he would go on to become a publicist with more reach than his own 6’2″ stature. Among his biggest achievements, he co-founded Huvane Baum Halls, a PR firm he led as CEO.

In 2001, Huvane Baum Halls merged with PMK. And in 2007, Cindi Berger along with Halls became the co-CEOs of PMK/HBH. Halls remained with HBH for 14 years.

He would later launch Slate PR with Stephen Huvane, another PR powerhouse. Together, they boast some of the most biggest names in Hollywood as clients, including Neil Patrick Harris, Annette Bening, Ryan Murphy, Sam Mendes, Ridley Scott, Frances McDormand, and many more.

They have consistently been counted among the most powerful publicists in the industry and ranked No. 1 on Business Insider’s list of 20 Most Powerful Publicists in Hollywood.

Thank you Hollygrove for giving Simon and I a tour yesterday. The work you're doing with at risk youth is so important. Please join us at the Norma Jean Gala to help this organization! Tickets are at: https://upliftfs.org/gala/normajeangalatickets/ @upliftfamily

Matt Bomer Came Out after Their Marriage

Halls was reportedly Bomer’s publicist before the duo started dating each other. Halls and Bomer secretly tied the knot in 2011, and Bomer opened up about his sexuality for the first time a year later.

Bomer came out as gay in February 2012 while accepting an award at the Desert AIDS Project’s Steve Chase Humanitarian Awards. There, he gave sweet shout-out to Halls and their children.

“I’d really especially like to thank my beautiful family: Simon, Kit, Walker, Henry,” Bomer said at that time. “Thank you for teaching me what unconditional love is. You will always be my proudest accomplishment. God bless you.”

Halls and Bomer Have Three Kids

The couple has three kids together born via surrogate. Their eldest son, Kit, was born in 2005, and twin boys Henry and Walker were born in 2008.