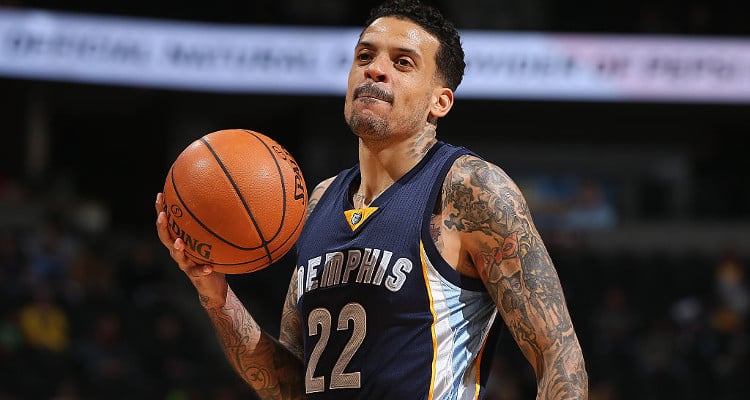 Kevin Durant’s injury status hasn’t been confirmed yet, but the Golden State Warriors aren’t taking any chances this NBA season. They’ve already sought out Matt Barnes to fill in for Durant!

The Golden State Warriors’ Kevin Durant suffered a hyperextended left knee on Tuesday (February 28) night’s game. The incident prompted the Warriors to look for Durant’s replacement for the rest of the season. It looks like their search ended with former Sacramento Kings small forward, Matt Barnes. Barnes has agreed to sign a rest-of-the-season deal with the Warriors, as opposed to a 10-day-contract. We’re sure you want to know more about the NBA player, including information his wife, kids, net worth, and stats. We’ve got all that and more in Matt Barnes’ wiki.

His Net Worth Increased Over the Span of His Career

Barns signed the first contract of his professional basketball career with the LA Clippers, earning him a salary of $249,000. From 2016-2017, he played for the Sacramento Kings, where his salary was $6.0 million.

He Played for Golden State in the Past

The 36-year-old was the 46th pick of the 2002 NBA draft by the Memphis Grizzles, but was traded immediately afterward. He made his NBA debut with the Fayetteville Patriots in the 2002-2003 season.

He played for the LA Clippers, Sacramento Kings, New York Knicks, Philadelphia 76ers, Los Angeles Lakers, Orlando Magic, Phoenix Suns, as well as the Golden State Warriors. He played for Golden State during the 2007-2008 season. After signing the temporary deal with the team, Barnes said, “I feel like I helped start something in ’07 and now I’m coming back to help finish it.” He also shared his joy about playing for the Warriors on his Twitter and Instagram accounts.

Message from a real one. Went to war w this dude, we will always be family! Love @_stak5_

In order to make room on the roster for Barnes, the team will be forced to abandon its plans to sign Jose Calderon, who was waived by the Lakers. Nevertheless, they’re quite happy about Barnes joining them with his well-rounded stats.

His Mother’s Death Inspired Him

The 6’7″ athlete was born in Santa Clara, California to Ann Barnes and Henry Barnes. He has a sister named Danielle and a brother named Jason. Unlike Matt, Jason plays football. The 32-year-old plays wide receiver in the Canadian Football League.

Ann Barnes passed away in 2007 from lung cancer, only 26 days after being diagnosed. Barnes got the news moments before he was going to hit the court with the Golden State Warriors. He channeled the grief from his mother’s death to start the Athletes vs Cancer foundation. Together, with his now ex-wife, Gloria Govan, he raised more than $225,000 for local screening programs. The charity funded free cancer screening programs in various cities.

9 years ago today I lost my best friend to a quick battle w cancer. Not a day passes I don't think about you.. Through all the ups down good time & bad times, I just hope I've made you proud! I love you & miss you like crazy mom.. #RIPMom #FuckCancer Last Family Photo

He Was Married to a Reality Star

Barnes was married to Gloria Govan from 2013 to 2016. If the name rings a bell, you might know her as one of the stars of the VH1 reality series, Basketball Wives. They were dating for a long time before they married. In 2008, they welcomed twin boys, Carter and Isaiah Barnes. Things seemed fine until Barnes was arrested on suspicion of domestic violence charges against Govan. The charges, though unproven, made sponsors wary about signing endorsement deals with him.

Initially, when the couple announced their divorce, things appeared amicable between the two. But their divorce took an ugly turn when Govan rebounded with another man. Not just any man, Derek Fisher, a former NBA player who now coaches the New York Knicks. Fisher and Barnes were once teammates, so you can see why Barnes wasn’t too happy about their romance.

Since Govan cozied up with Fisher, their divorce became a battle of child custody and spousal support. Barnes paid $5,000 per son every month in child support and $20,000 per month for spousal support. As of 2017, Barnes refused to pay his ex-wife and is demanding the judges overhaul the custody ruling, claiming that Govan isn’t allowing him to see his sons.

Dinner w my guys!! They said if I post this on IG need to say hashtag bro time ?? Vodka & lemonade, hold the vodka in two! #BroTime #BroTalk