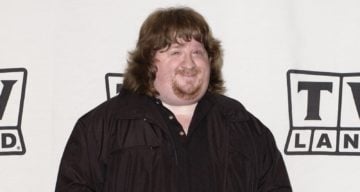 Mason Reese, with his charisma and unique looks, became a phenomenon as a child star in the ‘70s. He’s since faded from the entertainment industry, but pops up now and then. His recent interview with ITV’s This Morning has everyone wondering if Reese is a sugar daddy to his very young girlfriend. Mason Reese, who has an estimated net worth of $1.0 million, denies he’s a sugar daddy. Nonetheless, we’ve got details on his career for those curious about how the child star has maintained his wealth.

Mason Reese was born on April 11, 1965 in Los Angeles, California. He’s the youngest child of William Reese, a theater set designer, and the actress Sonia Darrin.

Darrin, best known for her femme fatale role in The Big Sleep, married William Reese, who was also a marketing services company president. They are parents to three sons and a daughter. Darrin’s brother is an iconic doctor-turned-surfer—Dorian Paskowitz.

Mason Reese was raised in Manhattan where he attended school and pursued his career in the limelight.

Also Read: Jason Aldean’s Net Worth, How Rich Is the Country Superstar?

Mason Reese Starred in Commercials as a Child

Between 1969 to 1984, Reese starred in over 75 commercials, most famously for Underwood Deviled Ham, Post Raisin Bran, and Dunkin’ Donuts.

He mispronounced smorgasbord as “borgasmord” in the Underwood Deviled Ham commercial and won over the nation. Among the seven Clio Awards his commercials have won is a Clio for best male actor for that spot.

He would also go on to appear on The Mike Douglas Show, including as a co-host. He also appeared in several other TV shows like The Howard Stern Show.

Reese isn’t working in showbiz anymore. However, he still regularly features on panels for GMA, Today, and the like in segments on former child artists.

In June 2019, he was interviewed for ITV’s This Morning. There, he revealed his relationship with 26-year-old adult entertainer Sarah Russi, who is nearly three decades his junior. Their May-December relationship led many to call the five-foot-tall former child star a “sugar daddy.”

In his 50s, Reese still appears to have his signature cherubic features that made him famous as a commercial star. Some question if he has a medical condition or disability. But in old interviews, he has mentioned that he is merely short and struggled with his excessive weight.

After retiring from acting when he was 17, he rejected college, went club-hopping, delved into music as a drummer, and got into accidents, which left him walking with a cane when he was in his early 30s.

Don’t Miss: John Singleton Net Worth, How Rich Was the Iconic Filmmaker at the Time of His Death?

As for all the fortune he earned as a child artist, “I spent a lot of that money. I bought things, enjoyed things. I set up a rehearsal studio in the apartment where I grew up on West End Avenue and 75th Street. I soundproofed my bedroom. I loved playing in clubs and bars, which was another form of being in front of the camera, but live. With commercials there was no instant gratification.”

Reese Is a Restaurateur

Since retiring from showbiz, Reese has focused on the restaurant business. He has owned and operated multiple restaurants, nightclubs, and bars, primarily in the New York City area.

He used to own Paladar, a Pan-Latino restaurant in Manhattan’s Lower East Side that eventually shuttered in 2011. He also owned a nightclub, Nowbar, at Seventh Avenue South and Leroy Street. After that closed in 2005, he started a short-lived Avenue A lounge called Destination Bar and Grille in the East Village. Even his sports bar, The Luxury Box, closed in 2015.

Reese Has a Production Company

Though his single attempt to revive his acting career with a sitcom pilot didn’t work, Reese hasn’t left the entertainment industry entirely. He executive produced and crowdsourced a web series called Life Interrupted in 2014.

He also launched Borgasmord Productions, a nod to his cute and famous gaffe in the commercial, in 2014. The company works on producing original series for TV.

He launched Mason Reese Management the following year, which manages the careers of young artists.

Here’s how Mason Reese compares to other child stars of his generation.