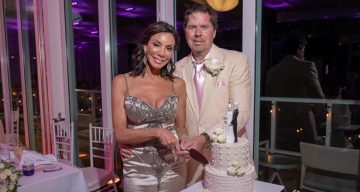 Danielle Staub and Martin Caffrey cut their wedding cake in Bimini on May 5, 2018 in Bimini, Bahamas. (Photo: Rodrigo Varela/Getty Images)

Danielle Staub’s whirlwind marriage and ugly divorce with Marty Caffrey continues to play out on the Real Housewives of New Jersey season 9. Their wedding drama is on air as their bitter separation carries on in real life, and we can see the cracks in their relationship from the get go. The attention is now on Danielle Staub’s soon-to-be-third ex-husband, Marty Caffrey.

Who Is Marty Caffrey?

Martin P. Caffrey was born in 1953. He was an investment banking managing director at Credit Suisse before he retired, and is now an entrepreneur. He also previously worked for A.G. Becker Inc. However, he’s better known for his brief stint on Real Housewives of New Jersey.

One of the OG RHONJ stars, Danielle Staub returned to her old Bravo stomping grounds (she hasn’t been on the show since season 3) in 2017 as a friend of the Housewives. In season 9, Staub’s wedding with Marty Caffrey formed a major plot on the show.

Staub and Caffrey began dating in 2016 and were engaged in May 2017 when Caffrey proposed on camera. They were set to marry in May 2018 in Bimini, Bahamas, in a televised wedding. Castmates Teresa Giudice and Margaret Josephs were her matrons of honor, while Staub’s daughters, Christine and Jillian, were among the bridesmaids.

Their destination wedding was rife with trouble from the start. Staub’s costars knew they were ill-fated from the beginning, and confronted both of them on separate occasions.

Joe Benigno and Joe Gorga had tense discussions with Caffrey and Staub separately hours before the wedding. Staub and Caffrey were firm that they are in love with each other. Staub and Josephs also had a heated argument, but all was well during the sunset wedding.

While we were watching Danielle’s wedding on RHONJ, things in the real world, outside reality TV, were entirely different. After four short months of marriage, Staub and Caffrey announced their divorce in August 2018. And it was ugly!

She Accused Him of Abuse

Shortly after Marty filed for divorce from Danielle, she sought a restraining order against him. She cited his alleged physical and emotional abuse towards her during their relationship as the reason.

She accused him of covertly making sex tapes of the two of them and threatening to expose them to the public. Staub claimed that he also emotionally abused her daughters. Moreover, she said that he secretly put the house they shared on sale.

Caffrey denied the accusations, saying that she fabricated them when he refused to drop the divorce. Staub allegedly threatened to “destroy” him and “go after his kids” if he didn’t call off the divorce.

In response, Caffrey filed a cease and desist order against her through his lawyer. He threatened her with legal action if she continued talking about him and his family, as she has been doing in recent weeks.

He’s definitely serious about dragging her to court over the string of accusations, because he added the report of his cease and desist filing to his Instagram bio for all to see.

Also Read: What Is Teresa Giudice’s Net Worth?

He Was Married Before

Once the divorce goes through, Staub will be Caffrey’s second ex-wife. He was previously married to Gail Marie Sincavage of New Jersey.

Sincavage, a graduate of New York University, was working at an insurance company at the time of their wedding. They married in 1979, though it’s not known when they split.

Staub was also previously married to Kevin Maher, whom she wed in 1988 after the two met at a Miami party two years earlier. She later married Thomas Staub in 1993 before separating in 2007.

He Has Three Children and a Granddaughter

Caffrey and Sincavage are parents to three children, David, Allison, and Lauren. Allison is married and has a daughter named Reese, whose pictures Caffrey shares on his Instagram. Lauren got engaged in November 2018.

Staub’s daughters, Christine, 24, and Jillian, 20, are from her marriage to Thomas Staub.

On RHONJ, Danielle revealed the first signs of trouble when she said that Caffrey’s children hated her. Apparently, only two of Caffrey’s kids made it to Bimini for the wedding.

While the divorce drama played out, Danielle claimed that Marty didn’t get along with his children. However, his son David denied her allegations.

He Played for the Yankees

Before he worked in investment banking, Caffrey had a brief career playing for the old Yankees team in Oneonta, New York. His baseball career began at Seton Hall University, where he played for the varsity team.

Sorry, had to brag a little!

A pitcher, he played in two College World Series. His 1.17 ERA ranked in the top 10 nationally. He had the best average in the country among collegiate pitchers.

Given his impressive stats, it was no surprise when he was drafted by the Yankees in 1975. In fact, he could have begun his MLB career sooner.

When he was still a junior at Seton Hall Prep, he was offered the opportunity to play for the New York Mets. However, he decided to put off a professional career for a while and follow his brother, Paul Caffrey, to SHU.

Paul Caffrey was drafted by the Mets, Yankees, and Philadelphia Phillies in high school. However, the older Caffrey, who played first base, opted to go to SHU first.

Danielle’s BFF-turned-enemy, Kim Granatell, claimed that Staub had lied about Caffrey’s Yankees past. However, he really did play for the Yankees and has even shared his old pictures in his uniform on Instagram. Caffrey is also a huge Yankees fan to this day.