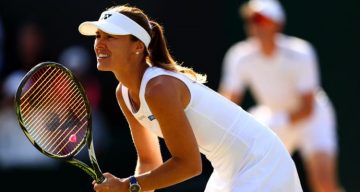 Martina Hingis at Wimbledon 2017 has taken the court by storm, and now she’s made it to the quarterfinals! She’s made a name for herself in the doubles tournament and she’s not done yet. So, if you want more information on the tennis star and her life, then have a look at our Martina Hingis wiki!

Martina Hingis was born on September 30, 1980 in Slovakia, but raised in Switzerland. She has been playing tennis since she was a child and is ranked fourth in the world in doubles. The 36-year-old tennis star has won five Grand Slams and a total of 43 titles. She’s also an Olympic medalist and won Silver at Rio 2016 in Women’s doubles. She’s 5’7″ and she’s a right-handed player. Martina Hingis’ net worth is estimated at $25.0 million, and she has been included in the International tennis Hall of Fame.

Hingis’ husband is Thibault Hutin, a 30-year-old equestrian, and they have been married since 2010. Despite her success on the court as a doubles player, Hingis has had little success with her husband. The two have been estranged for some time now and he also accused her of cheating on multiple occasions, according to a Swiss newspaper.

“A year after the wedding [. . .] we were supposed to meet in New York and I wanted to give her a surprise, Hutin said to SonntagsBlick. “Upon arriving at the hotel room it was me that was surprised, because Martina was not alone.”

Hutin added: “Late last year I found out that she had cheated on me again.”

Reportedly, Hingis told a Swiss magazine called Schweizer Illustrierten, that she and her husband had been separated since the beginning of the year.

In 2013, Hingis was reported to be in a relationship with Spanish sports management executive, David Tosas Ros.

“They shared the hotel room there and they paraded themselves in public in the Bois de Boulogne,” Hutin said. “There are even pictures of them. You can imagine how painful it was for me.”

Hingis didn’t respond to Hutin’s claims and by the looks of it, the pair are still separated.

You won’t find Martina Hingis’ bikini pics or hot pics on her Instagram, but you will find her latest tennis shots! It’s no surprise that most of her photos are nothing but her playing the sport she loves.

In 2002, Hingis retired early due to an injury she sustained at the age of 22. She returned in 2006, but then quit a year later after testing positive for cocaine after a routine drug test.

“I missed the game. I felt like, at 25, it’s either now or never. I’m not going to get younger, I’m not 17 anymore. Either I try now, or the train passes very fast,” Hingis said of her first comeback in 2006 in an interview with WTA Tennis. “People they try, and they never make it anymore. It’s very difficult to find the routine again and then the sport moves on. I think if I didn’t try then, then I would have those regrets for the rest of my life. I was more scared to not have the success.”

We can only hope that her bad-girls ways are behind her, and her full focus is on winning that title she’s worked so very hard for.