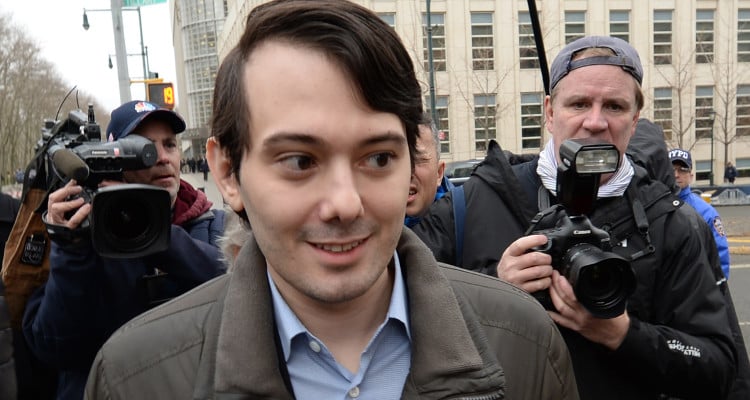 Martin Shkreli is certifiably “America’s most hated man.” Nonetheless, that doesn’t stop him from using his title to his advantage. This time, however, the millionaire is going to use his negative attention for a good cause! Shkreli has made news by announcing that he is giving opportunity for someone to punch/slap him in the face for a price! The proceeds will go to his deceased friend’s son, who survived leukemia. For those who don’t who Martin Shkreli is and why is he auctioning the opportunity to punch him in the face, your wait ends here! We have all you need to know about the notorious millionaire.

Martin Shkreli became the country’s most hated man, when he acquired the purchasing rights for a drug called Daraprim, which is needed by cancer and AIDS patients to prevent a parasitic infection. Shkreli then hiked up the price of Daraprim by 5000 percent overnight, making the drug unattainable for many patients who don’t have that kind of money. The 33-year-old was also once arrested for embezzling money to repay prior debts. At the time of his arrest, the pharma-boss was worth $100 million.

Here are some facts about “America’s most hated man,” Martin Shkreli:

Already $100 million rich at the mere age of 33, Shkreli had earned most of his wealth from Wall Street in his younger days. He owned a hedge fund called MSMB Management, before becoming an executive at Turing Pharmaceuticals, the manufacturer of Daraprim. He worked under Mad Money host, James Cramer.

From Rags to Riches

He’s come a long way from being the son of two Croatian immigrant janitors. Martin, his two sisters, and his brother grew up in Brooklyn. He attended Hunter College High School but dropped out in his senior year. He received enough credits for his diploma and earned an internship at the Wall Street hedge fund, Cramer, Berkowitz and Company, when he was only 17 years old. In 2004, Shkreli earned his Bachelors Degree in Business Administration.

Shkreli had made profile on a dating site called OKCupid. He called himself a “New York native,” and gave a long list of his “good” qualities, which were hard to believe. The most outrageous claim on his dating profile was that he started a drug company in order to cure rare and severe diseases.

He Thinks the Price Hike on Daraprim is Justified

The patients who rely on Daraprim for their lives can no longer afford the drug, but Shkreli believes the drug is so rarely used that the hike in price is justified. His thinking is contradictory, since the expensive drug can’t be used by patients if they can’t afford it. Even Hillary Clinton lashed out at him for the price hike, demanding him to sell the drug at the price it’s meant to be.

It’s True; He’s Letting You Punch Him in the Face

Shkreli may not ever admit to fraud, or apologize for making a life-saving drug so expensive, and he knows he’s hated by many. So, he’s using that hate to his advantage. Shkreli tweeted on September 26 that he’s auctioning a chance for people to have their own way with him, whether that includes a slap/punch to the face or even just have dinner with him (though, the latter is highly unlikely). He’s basically offering the highest bidder a chance to get a little revenge, and is offering a prize for the runner-up, as well. (Maybe a kick to the…)

Donation for my PR consultant who passed away. Leaves behind a young child who is recovering from cancer.https://t.co/YLRa4PGTRe

Winner gets slap/punch/dinner or whatever they want. Runner up gets something, too. Raising money for my dead friend’s son.

Martin Shkreli may not win any praise for his generous act, but whoever wins the auction has the opportunity of a lifetime to give the millionaire bad boy his just desserts!