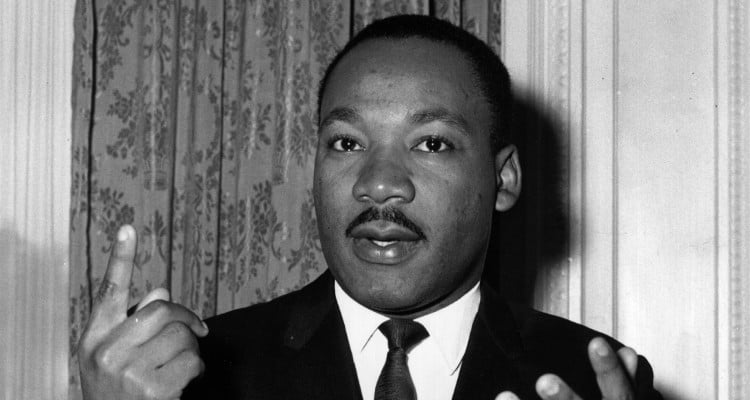 The influence of some are not limited by time and distance. Martin Luther King Jr. is just one example of this. Even though he fought for racial equality for black people in America, his influence is still seen in freedom movements all over the world. With his non-violent and eloquent protests, he inspired people who have been discriminated against to fight for their self-respect and dignity.

Somebody once said, “You are not alive if you don’t have a dream.” By that measure, few have lived as bountiful a life as Martin Luther King Jr. He had a dream. A dream where people of color were no longer racially segregated and were treated fairly, and where opportunities were as available to them just as they were for white people. King may not physically be with us, but his spirit still lives in the heart of every person who has ever been discriminated against. Martin Luther King Jr.’s classic “I Have a Dream” speech still reverberates across the landscape of the United States and inspires every individual, irrespective of his or her color. As we approach his 88th birthday, we have some details from Martin Luther King Jr.’s wiki.

Renamed by His Father 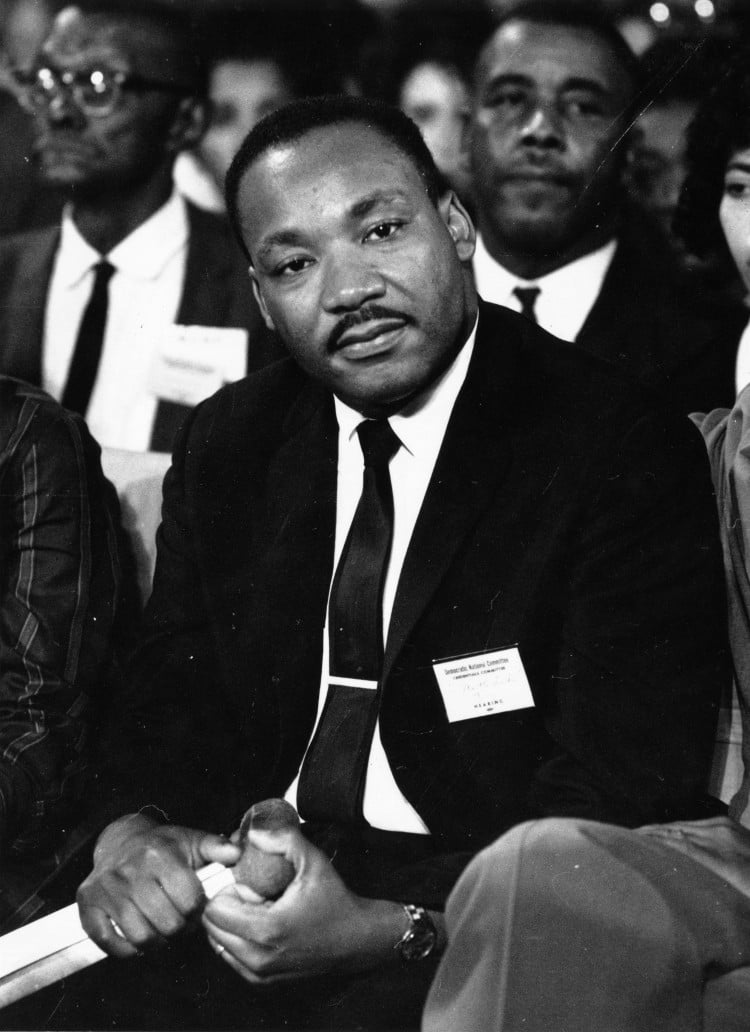 The boy’s father owned a business near King’s family home, and the two boys were good friends. King had to attend a school for African-Americans while the other boy went to a public school for caucasian children. The father of King’s friend did not want his son to play with black kids, so the two could no longer remain friends. King Sr. stood up against segregation in front of his son so he knew that the intolerance would not be accepted. Once, King Sr. refused to listen to a traffic policeman who called him “boy.” Another time, he and his son were told to “move to the rear” of a shoe store to be served because of their skin color. His father angrily walked out of the store with his son.

While Martin Luther King Jr. was a junior in high school, Morehouse College, a respected black college, announced that high school juniors who could pass its entrance exam would be granted admittance. This was when most students had left school in order to enlist in the war, so Morehouse had a decline in enrollment. King was 15 at the time, and had put all his energy and frustration in school in order to become a good student. His oratorical skills were recognized from an early age, and he became a very good debater. The studying paid off as he skipped grades nine and twelve. King took the entrance exam, and was accepted to Morehouse College. 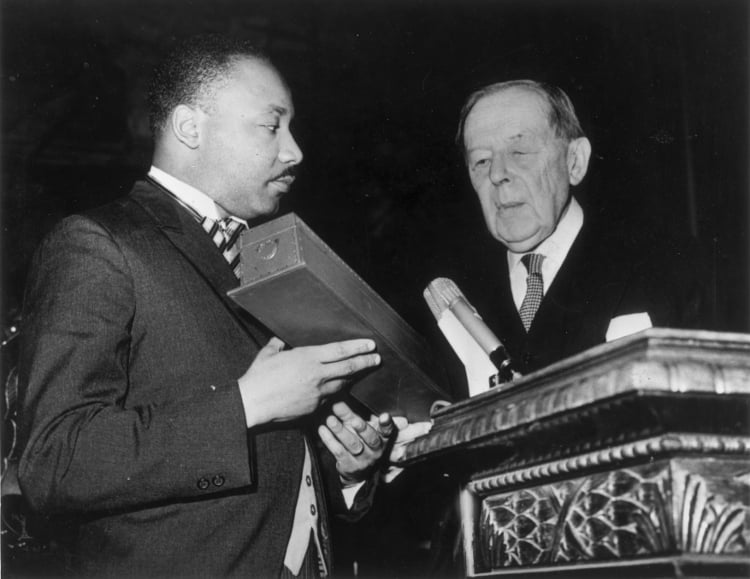 Martin Luther King Jr.’s college education was beneficial, and when he was 18 King decided to leave school in order to enter the ministry. He said that the church offered him a way to answer “an inner urge to serve humanity.” King’s education continued, and he graduated from Morehouse in 1947, before enrolling in the Crozer Theological Seminary in Chester, Pennsylvania. He graduated with a B.Div degree in 1951. During his years in college, King became romantically involved with the white daughter of a German immigrant. He wanted to marry her, but his friends had advised him against an interracial marriage, as it could negatively impact his chances of pastoring a church.

King married Coretta Scott on June 18, 1953, when he was 24, and she was 26. They parented four children: Yolanda King, Martin Luther King III, Dexter Scott King, and Bernice King. Martin Luther King Jr. limited his wife’s role in the Civil Rights Movement, as he expected her to be a housewife and mother. In 1954, King became the pastor of the Dexter Avenue Baptist Church in Montgomery, Alabama. He then began his doctoral studies in systematic theology at Boston University and received his Ph. D degree on June 5, 1955.

Voice of the Oppressed 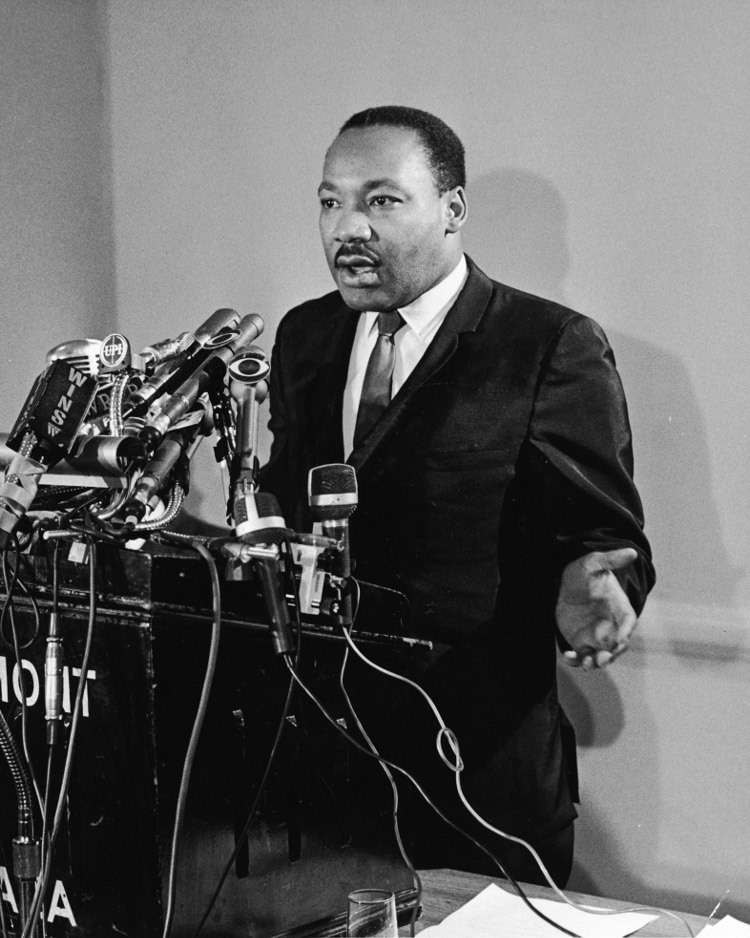 King’s childhood experiences of segregation were the source of his expression as an adult. He had his first fight during the Montgomery bus boycott when Rosa Parks refused to give up her bus seat for a white man. Afterwards, he led the bus boycott, resulting in his house being bombed. The boycott lasted for 385 days, and King was arrested before the authorities caved in. A United States District Court ruling ended racial segregation on all Montgomery public buses. King became a national figure and the best-known spokesman for the civil rights movement. 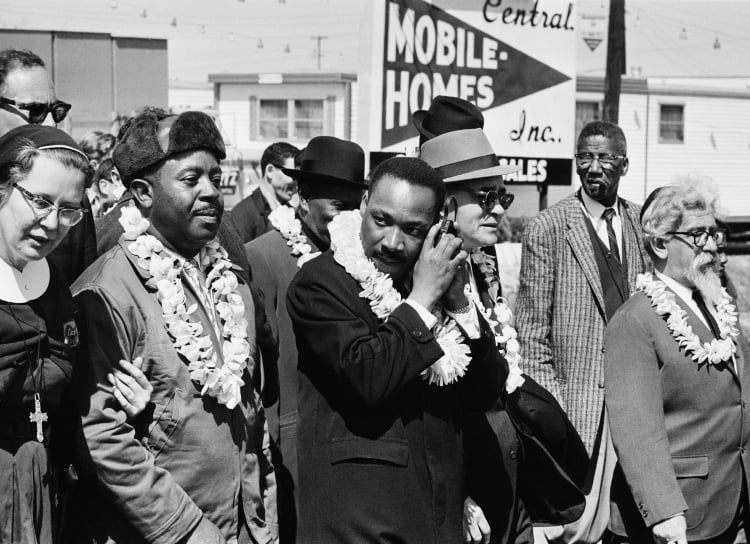 This was just the beginning of Martin Luther King Jr.’s accomplishments. King believed in non-violence and decided that he would organize and lead peaceful protests against racial segregation. Racial segregation was particularly predominant in the South, and King believed that organized, nonviolent protests would lead to media coverage of the struggle for black equality and voting rights. Journalistic accounts and televised footage of the ill treatment of blacks led to a change in public opinion about how people of color should be treated. This became known as the Civil Rights Movement, and protests by other black leaders resulted in the right to vote, desegregation, labor rights, and other basic civil rights being granted to minorities.

The Civil Rights Act of 1964 and the Voting Rights Act of 1965 were passed successfully because of King’s heroic efforts. On August 28, 1963, Martin Luther King Jr. led a march to Washington for jobs and freedom to show the desperate situation of blacks in the southern part of America. It was there that he made his famous “I Have a Dream” speech. Martin Luther King Jr.’s speech lasted 17 minutes, and is considered one of the best speeches ever given. Over the years this speech and several of Martin Luther King Jr.’s quotes have inspired several generations of both black and white people to fight for equality and self-respect. 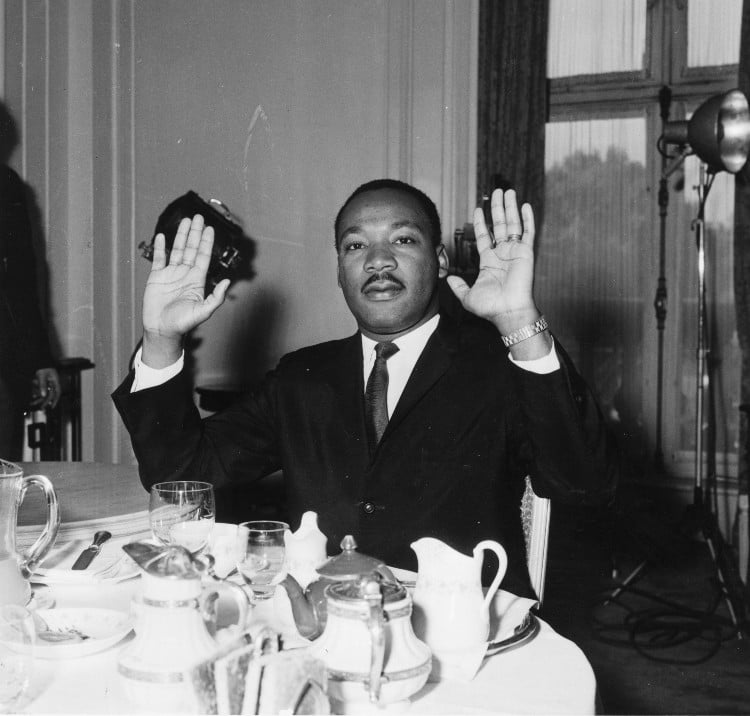 King’s efforts to bring about racial equality were slow moving, but he made many dangerous enemies. When did Martin Luther King Jr. Die? On April 4, 1968, in Memphis, a white man James Earl Ray shot King as he was standing on the second floor balcony of a motel. King was immediately taken to the hospital where emergency surgery was performed. Despite best efforts of the doctors and prayers of his supporters, King died at 7:05 p.m. at St. Joseph’s Hospital. January 20, 1986 was the first time that Martin Luther King Jr. Day was observed. The national holiday is officially observed on the third Monday in January, which falls close to the date of his birthday. As of January 17, 2000, all 50 states observed Martin Luther King Jr. Day as a federal holiday.

The Dream is Still Alive 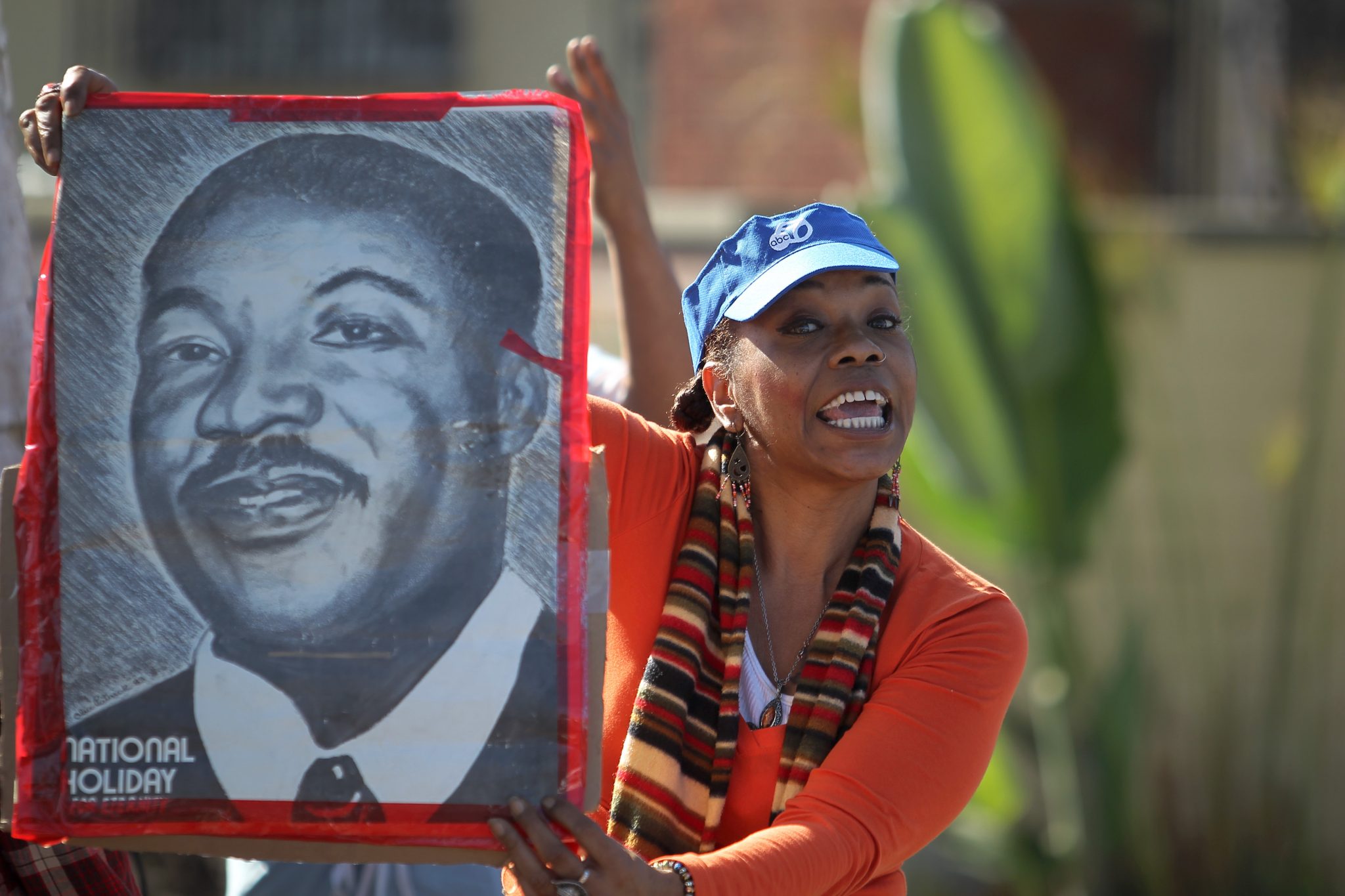 Many still ask “what was Martin Luther King Jr. famous for?” He gave minorities hope and direction. He gave them a voice and the means to fight for justice. His message of equality and respect for others is as true today as it was 50 years ago. Most of all, King gave everyone a dream that the color of one’s skin would have no impact on a person’s opinion of them. It’s a dream that lives even today in everyone’s heart. Through his acts and his wise words, Martin Luther King Jr. lives on. 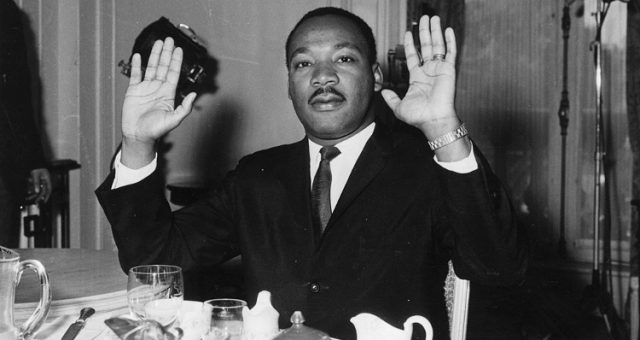