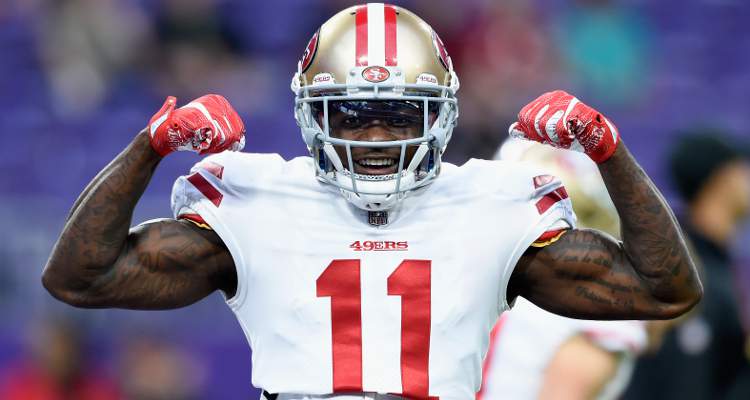 Marquise Goodwin scored the game-winning touchdown for the San Francisco 49ers on Sunday against the New York Giants. This victorious glory comes hours after Goodwin and his wife’s baby boy died. We’ve got the details here.

On Sunday’s game between the San Francisco 49ers and New York Giants, Marquise Goodwin made a spectacular 83-yard reception to score a touchdown. Soon after he crossed the goal line, earning the 49ers their first win of the year, Goodwin fell to his knees in the end zone and broke down in tears. He explained the reason for his emotional moment in an Instagram post later. Marquise Goodwin and his wife, Morgan Goodwin, went through a tragedy hours before the game. Find out about Marquise Goodwin’s wife in our Morgan Goodwin wiki.

It’s well known that the NFL is Marquise Goodwin’s side gig. The wide receiver is a track and field athlete, having represented the U.S. in the Olympics. Even as his career in football soars, he aspires to win Olympic gold. But in the Goodwin house, Morgan is the track and field star.

She majored in public relations at the University of Texas, where she was the rising star of the Longhorns. As a freshman, she won two gold medals at the World Junior Championships in Athletics in 2012. The following year, she won the Big 12 Outdoor championships, and again in the 60-meter hurdles in 2015.

In college, she attempted to qualify for the 2016 Olympics. She clocked 13.21 seconds despite rainy conditions in the semifinals, finishing 14th overall. But she failed to make it on the U.S. 100 meter hurdles team.

She Has Acting Aspirations

Morgan has since retired from the track and is content with being an NFL wife. Her Instagram is private, but her bio states that she’s an actress. While at the University of Texas, she maintained a GPA above 3.0 to qualify as a student-athlete.

During her days as a student, she built connections with professors, coaches, athletes, and friends. With these connections, she hoped to have some help her in her post-athletic career aspirations.

“I want to be an actress,” said the 24-year-old. “I am working towards that, too. I have a lot of connections and I have networked very well and I think I am in top shape to do anything really, even if it is track to PR to acting. I feel like I am capable of growing to the fullest in each of those categories.”

In Southwest Dekalb High School, Georgia, Morgan excelled in academics and did just as well as she did on the track. She was a four-year honor student who received a high achievers award in mathematics and science.

During her senior year, she joined a mentoring program where she tutored freshman students. While doing all this, she still made time to write and edit the sports section of the school newspaper, The Prowler.

Treat her like a QUEEN, & she'll make you her King // #HappyBirthday to the love of my life, my best friend in the whole world, my confidant, my soul partner. I love you and appreciate you, & am grateful for all that you've done for me. Sometimes I get distracted by the world and fall flat on my a$$; instead of judging me & pointing the finger at me while I'm struggling on the ground, you offer your whole hand to lift me back to my feet. A true partner, a true love, a gift from God, a true wife. I love you for life! // help wish my #Queen a happy birthday. (PS: she wanted a photo shoot so I got her a damn photo shoot! More pics coming)

The former athlete lists fluency in American Sign Language among her skills. She used this skill while volunteering as an interpreter for the Texas School for the Deaf. She was also a vet assistant for an animal hospital for a year.

While part of the Longhorn athletics team, she did her best to encourage kids to take up athletics. She participated as a face painter during the Longhorn Halloween celebrations. She also joined her teammates for an initiative where kids got to try out the University of Texas track and field facility.

She was one of many student-athletes who participated in a special award ceremony for people with disabilities. She picked up trash on Martin Luther King Day and bought Christmas presents for UT staff. Her LinkedIn also states that she was an intern at the American Heart Association.

On September 20, Marquise revealed through an Instagram post that they were expecting their first child together. Around 4:00 a.m. on Sunday (November 12) morning, Morgan had to deliver the baby prematurely due to complications. Sadly, their son didn’t make it.

“Although we are hurt, I am grateful for the experience and grateful that God blessed me with a wife as courageous and resilient as Morgan,” Marquise wrote in an emotional Instagram post. He added, “The pain (physically, mentally, & emotionally) that she has endured is unbelievable.”

Blessing from above!!! ?Psalms 127:3 "Behold, children are a heritage from the Lord, the fruit of the womb a reward." #BabyGoodwin2018

Just hours after their loss, Marquise joined his team on the field to play against New York. Not only did he manage to play, but he also received an 83-yard pass from quarterback C.J. Beathard, the longest play from scrimmage for the 49ers this season. With his first touchdown since joining San Francisco, he led the 49ers to their first win of the year.

Soon after the game, Marquise left to be with his family. The 49ers won’t be returning to practice until November 20.

I just wanna thank those who’ve genuinely prayed for @morganakamomo & myself through out this pregnancy. Unfortunately we lost our baby boy due to some complications, and had to prematurely deliver him early this morning around 4am. Although we are hurt, I am grateful for the experience and grateful that God blessed me with a wife as courageous and resilient as Morgan. The pain (physically, mentally, & emotionally) that she has endured is unbelievable. Please Pray for the Goodwin family. ??