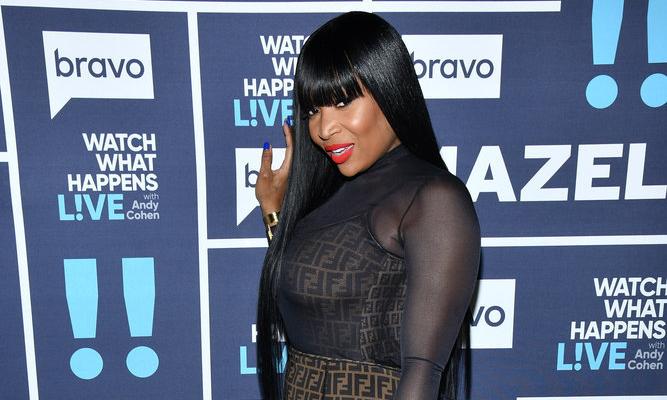 After watching the latest season of The Real Housewives of Atlanta and The Real Housewives of Atlanta reunion, many are still wondering how Marlo Hampton makes ends meet. Sure, she’s known for her appearance as a housewife on the show, but you may be surprised to learn this self-made woman isn’t the richest among the wives. With Marlo Hampton’s net worth estimated at $600,000, many are wondering how she made her money. So, exactly what does Marlo Hampton do for a living? Keep reading to find out!

Before we talk about Marlo Hampton’s money, we should probably give you a recap of who the Atlanta housewife is, and how she got started.

With every housewife, fans are always trying to follow the money and get to the bottom of those bottomless bank accounts! So, why should Hampton be an exception to the rule?

Who Is Marlo Hampton?

While she’s come a long way in her adulthood, her childhood was less glamorous than you would think. Hampton grew up in foster care as a child, due to her mother’s abuse and addiction to drugs.

Hampton eventually aged out of the system and went on to become a scholar! She studied social work and interdisciplinary science at the College of Arts and Science at the University of Southern Florida, where she received her Bachelor’s degree in 2003.

Since Hampton joined the cast, fans (both new and old) have always been curious about her finances. How can she afford her lavish lifestyle? What exactly does she do?

Hampton is an entrepreneur, designer, and stylist, on top of being a reality star. She launched an accessory brand called Arie and Emma (named after her grandmother and mother), which also includes jewelry and sunglasses.

For three years, she owned her own clothing store at Atlanta’s Perimeter Mall called Red Carpet Boutique. However, it closed down in 2011.

Then she began filming RHOA with Bravo, which became another source of income. And possibly her largest.

According to reports, she is said to be paid the lowest amount of any of the other housewives on set. She makes $75,000 per season, under the condition that she is available for filming upon request.

But she certainly made some wise moves with her money!

In an interview with The Hollywood Reporter, Hampton said that she invested her money, and her cars and home are paid for.

Well, it’s true. Marlo Hampton’s house is paid off, but not by her.

In the series, the reality star’s main story for a while was all about Marlo Hampton’s sugar daddy. He was referred to as Big Poppa, the name that housewife Kim Zolciak gave her own older boyfriend.

Hampton was definitely getting gifts from an older man, whom many believed was CNN’s Ted Turner, but she never revealed his identity. She dated her mystery billionaire (yes, with a “B”) for five years and are no longer together.

But before they split up, both Hampton and her mother received houses, leaving the women mortgage-free.

The home was built in 2007 and is complete with seven rooms, four bedrooms, and three bathrooms. Perfectly fit for this Atlanta Queen!

In honor of her troubled past and rap sheet of eight charges, Hampton started the non-profit group, Glam It UP, in 2011.

The organization mentors girls from ages 13 to 18 and treats them to a sample of a glamorous lifestyle. It was an effort to help them reach for success and raise their self-esteem.

“My Glam It UP girls, I tell them, ‘The world is yours. If you can dream it, you can achieve it,’” Hampton shared with The Daily Dish. “So I just hope they look at me and say, ‘Dang, well, Ms. Marlo was in foster care, and she aged out. I can do it, too.’”

As an aspiring author, Hampton also had a cocktail book in the works, where her readers could enjoy pictures of her in her many styles of clothing.

She’s also in charge of her “Simply Giving” project, which gives Thanksgiving and Christmas meals and presents to families in need, every holiday.

I need your help, I’m dressing & sending some girls to Prom 2018 through my #GlamItUp charity. Send nominations to ➡️[email protected]⬅️their name, phone number, school, prom date & why they deserve to get the Marlotta experience. I’m partnering with Reco @houseofchapple for some amazingly stylish ?dresses Deadline is Sunday, April 15th. Must Live in the Atlanta metro area.

To get a look at the reality star now, you can always check out Marlo Hampton’s Instagram account. She was recently at singer Tammy Rivera’s Fate album release party and has also been posting about her family.

And she’s even into vlogging! She has a YouTube channel (Marlo Hampton) with over 6K subscribers.

She often posts “Ask Marlo” segments where her fans can watch live Q&A style videos of the burning questions people want to know. She’s dubbed these videos #AskMarlo, where she answers direct questions that have been emailed to her by fans.

They often ask for Marlo’s advice on fashion, home decor (and where to shop), and even relationship and sex advice. Marlo happily answers all her fans queries with ease and posts the segments to her channel regularly.

Back in February, on an episode of Watch What Happens Live, Hampton told host Andy Cohen that she was dating someone. However, she didn’t mention his name.

He may not be Big Poppa, but according to Marlo Hampton, “He’s not a Broke Poppa.”

This housewife is definitely one independent woman, and prefers to keep tight-lipped on her love life! Either way, she seems to be doing just fine on her own!