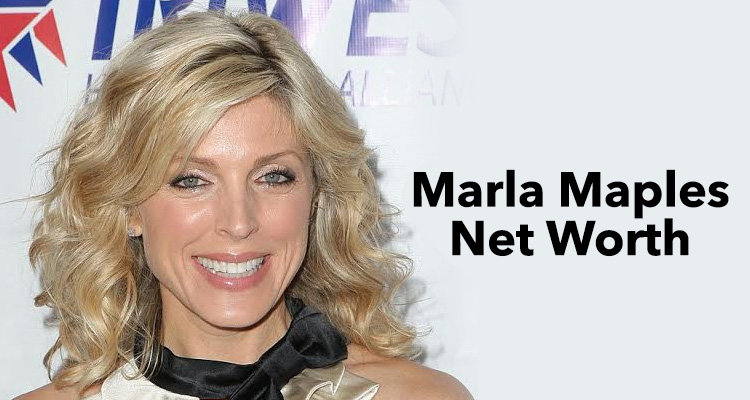 The new POTUS, Donald Trump takes office today (January 20) and his wife, Melania Trump will become the country’s First Lady. Before Melania, Trump was married to Ivana Zelníčková and Marla Maples. Now that Trump is President, many have become curious about Marla Maples, who has a net worth of $30 million.

It’s pretty well-known that Donald Trump has been married three times. The new First Lady, Melania Trump, is his third wife and the first woman in American history to be the President’s third spouse. Donald Trump’s first marriage was to Ivana Zelníčková with whom he had Donald Trump Jr., Ivanka Trump, and Eric Trump. Trump divorced Ivana to marry Marla Maples, and they have one daughter, Tiffany. Trump and Maples divorced after six years of marriage and Tiffany was raised by her mother. Trump’s marriage to Maples had been a controversial one back in the 1980s. After their divorce, there were a few ups and downs, but Trump continued to provide child support for his daughter and Maples has always spoken well about her ex-husband.

With her own career and being married to a billionaire, many are wondering how rich is Marla Maples? The former actress is worth $30 million. We’ve got the lowdown on Trump’s ex-wife’s wealth in Marla Maples’ net worth.

How Rich is Marla Maples?

Marla Maples’ wealth has grown over time, and latest figures reveal that she has a reported net worth of $30 million. The 53-year-old’s wealth comes from doing small roles on TV shows and movies. Besides acting, she also makes televised appearances, which add to her income.

Maples’ mother was a model and homemaker, and her father was a real estate developer. She has appeared in films like Stephen King’s Maximum Overdrive and the 1996 thriller, Executive Decisions. Her other film credits include Happiness, Black and White, A Christmas Too Many, Loving Annabelle, Two of Hearts, Richie Rich’s Christmas Wish, For Richer or Poorer, A Sight for Sore Eyes, and Something Wilder.

On television, she once appeared as a celebrity guest on WWF Wrestlemania VII as a timekeeper, in the main match between Hulk Hogan and Sgt. Slaughter. She made a cameo in Designing Women and Fresh Prince of Bel-Air, along with Trump. Maples also co-hosted the 1996 and 1997 Miss Universe Pageants and the 1997 Miss USA Pageant. In 2016, she was one of the 22 celebrities on Dancing With the Stars season 22. She was partnered with Tony Dovolani and she finished in 10th place. Maples was also a guest co-host on ABC’s, The View.

She Has Other Business Ventures

Marla Maples has expanded beyond acting as a source of income. She worked in theater, she’s had her own radio show, and she even did an advertising campaign for No Excuses Jeans. In 1993, she launched a line of maternity clothing that was sold in department stores across the country.

Maples also advises on improving health through social media. She claims she is “mostly vegan” and avoids dairy, eats organic, and chooses to be gluten free. She told People magazine the three tips for healthy living are: listening to your body, eating organic foods, and being joyful in all you do and eat.

After her divorce from Trump, Maples took her daughter and moved to California to raise her on her own. Though her father has a net worth of more than $4 billion and is the richest President in American history, Tiffany Trump’s net worth is estimated to be only $1 million. Trump wasn’t present most of Tiffany’s life, but he provided her with monetary support. Though, Maples was no loser in her divorce from Trump. She reportedly got $1 million, a share of property, and child support for Tiffany.

While Marla Maples’ spousal support is by no means low, it looks like peanuts when compared to what Ivana Trump got from her divorce. Trump’s first wife and the mother of his three oldest children, reportedly got $25 million, a mansion in Greenwich, an apartment in Trump Plaza, child support, and alimony.