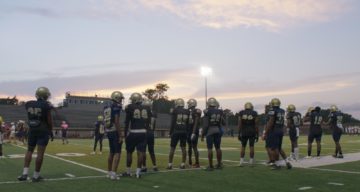 Last Chance U season 4 was exclusively released on Netflix on Friday, July 19, 2019. This season continues to follow what many fans are calling a particularly disastrous season for the Independence Pirates. Following the career ups and downs of talented wide receiver Markiese King, it’s hard to say what the future holds for the team and some of its star players. Read our Markiese King wiki for updates on the young athlete and to learn about the circumstances that led to him quitting the team.

“Last Chance U” Season 4 Is on Netflix

Last Chance U is a highly acclaimed Netflix series that showcases what it’s really like for junior college (JUCO) football players in middle America to try to make it to D1 (Division I) schools. The goal is to try to catch the attention of the NFL and the National Collegiate Athletic Association (NCAA).

Many of these young athletes have a rough start in life and come from tough neighborhoods, which means they have to work extra hard to be recognized and qualify for football scholarships.

As former Independence Pirates wide receiver Markiese King can attest, the stakes are much higher and the pressure is greater for these young athletes. So what happened to Markiese King after the season’s tumultuous drama?

When it comes to junior college football, Markiese King is one of the biggest heavy hitters—or at least he was until this season, when his personal life choices got in the way (more on that later).

Born in Dallas, Texas, he played the position of cornerback at his alma mater high school, Cliff Oak High School. At 5’8 and 168 pounds, he was later drafted as a wide receiver for the Independence Pirates at Independence Community College in Kansas.

Initially, several other schools including Louisville, Texas Christian University, the Texas University, and Texas Tech all offered Markiese King football scholarships. However, his poor academic performance deemed him “unable to become academically eligible to enroll,” according to a 2017 Dallas News article. King headed to Independence to redeem his grades and focus on earning a prestigious football scholarship.

In 2017, King told the publication that “you’ve got to take advantage of the opportunities given to you. You don’t get too many chances…It’s a mindset thing. I think if you put your mind to it, you can do anything. I think [after 18 months] I’ll be in a position to go anywhere I want. If I take care of business, I’ll be ready to go.”

Markiese King was considered one of the most talented players on Last Chance U from the beginning of season 4, and he even received a few offers from some prestigious franchises.

In a move that surprised everyone and their mother, now-infamous former Independence head coach, Jason Brown, kicked King off the team and suspended him for the remainder of the season (which only had one game left). The reason for this ill-advised decision?

According to King, the reason he was suspended was because Brown, who’s had a few legal troubles of his own recently, claimed that his room smelled like marijuana. However, the story is a little muddled as some sources claim that Brown actually caught King smoking marijuana in his room.

This happened right around the time that Lamar University was supposed to interview the star wide receiver, but they decided to delay their visit after Brown informed them of the situation.

Following that incident, it quickly became unclear whether Lamar University was still considering recruiting the young athlete, especially since King later found out that Brown had allegedly been badmouthing him to the university’s recruitment department. Four weeks after the season ended, though, they decided to offer King the scholarship after all.

On February 6, King posted a video to his social media stating that he was “1000% committed to Lamar University.”

Unfortunately, as luck would have it, this was around the same time that King’s mother reportedly became seriously ill, though the nature of her illness hasn’t been disclosed.

Due to her allegedly declining health, he decided to rescind his acceptance. Some reports even go so far as to state that King’s mother passed away, but this news hasn’t been confirmed by King or his representatives as of yet.

In addition to all of the off-field drama, King also suffered three concussions along with an onslaught of other injuries during the 2017 season, which hindered his performance.

After convincing game officials and his trainer that he was all right, it quickly became clear that he wasn’t.

Eventually, King left the game to recover from his injuries and to spend more time caring for his mother.

In the season 4 finale of Last Chance U, the show released a statement explaining the situation: “Markiese King withdrew from ICC in the spring due to his mother’s health. He is currently not eligible to play D1 football.”

Taking Some Time Off

If the news of his mother’s passing is indeed true, then it makes sense for King to take some time off from playing football. The field, the league, and his many fans will always be there when he’s ready to make a comeback.

Markiese King’s Independence career isn’t necessarily over. In fact, there’s still a chance he may return to football in the near future. Don’t think of this break as goodbye; think of it as see you later.

Don’t Miss: “Last Chance U” Seasons 3 and 4 Players and Coaches, Where Are They Now?