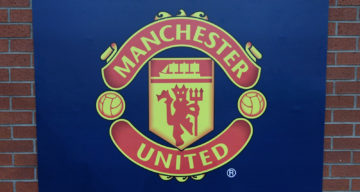 A sign with the logo of Manchester United is seen outside the stadium prior to the Group H match of the UEFA Champions League between Manchester United and Juventus at Old Trafford on October 23, 2018 in Manchester, United Kingdom. (Photo by Laurence Griffiths/Getty Images)

Mark Goldbridge is something of a star in the football fan TV phenomenon. The Manchester United fan and creator of the YouTube channel, The United Stand, might be quite polarizing among Red Devils. Nonetheless, he’s shaped football viewing for Internet users. We’ve explained the appeal of this sports commentator in Mark Goldbridge’s wiki.

Who Is Mark Goldbridge?

Mark Goldbridge was born Brent Di Cesare, on April 7, 1979 and is 39 years old. There’s not much known about him on the personal front. He’s reportedly married and he and his wife welcomed their third child in 2017.

The YouTube celeb told True Geordie on “The Kick Off” that he was a police officer before becoming a YouTuber. He couldn’t use his real name on YouTube while still at his previous job, so he adopted the online persona, “Mark Goldbridge.”

But he eventually combined his passion for football and journalism with a Manchester United-centric YouTube fan channel.

Goldbridge started his first YouTube channel, The United Stand, in 2014. He does live watch-alongs while venting and ranting about everything Manchester United, and he’s garnered over 383,000 subscribers.

This polarizing personality rants about everything going in the Red Devil universe—even going to other clubs before Man U plays against them just to rant about the opponent. Some of his videos have turned him into meme-greatness.

He’s evolved to providing sports commentary on platforms besides YouTube. He was a sports commentator on 4rtun and is currently a contributor of Man U-related news at Paddy Power News.

Some Think He’s Not a Real United Fan

Goldbridge’s obsession with Manchester United borders on excessive and sometimes seems like an act. And often, his loyalty to Man U has been brought into question.

The YouTuber has made no secret that he grew up in Nottingham, in a football-loving household. His mother is a United fan and his father, a Chelsea fan. But it was his football-crazed grandfather who converted him to a Manchester United fan, and he has been one ever since.

He mentioned his Nottingham Forest FC connection in an old video, which has since been misconstrued to claim that he’s a Forest fan. However, Goldbridge says that it isn’t the whole picture.

In a blog post, he claims that the accusations that he’s not a real Man U fan are an attempt to discredit and shut down The United Stand. In the same post, he writes that while he supported Forest when it was up against United’s rivals, he isn’t exactly a fan like he’s of Man U.

However, Goldbridge has constantly been accused by the Red Devils’ fan community of not being a real fan. It came up again when he infamously feuded with Arsenal Fan TV’s Liam Mark “Mr DT” Goodenough in 2018.

The details are unclear, owing to both sides giving different versions of the events. Nonetheless, many football fans reacted to the bizarre feud.

A thread in the Red Devils subreddit claims that Goldbridge isn’t a real Man U fan like DT is an Arsenal fan. Many continue to say he’s really a closeted Forest supporter and peddles baseless rumors about the Manchester United club to boost his YouTube views.

He’s outed himself as a Forest fan again 🤣🤣 Jokes!

He’s the Source of Memes

Whether it’s his absurd rants, bizarre humor, Alan Partridge mannerisms, or feuds with the likes of Adam McKola that don’t make any sense, Mark Goldbridge is the greatest gift from the meme gods. Some of his antics have left the Internet in stitches in a way only Goldbridge can pull off.

Check out some of his most hilarious moments below.

What even is this Goldbridge meme 🤣🤣🤣

Mark Goldbridge the gift that keeps on giving pic.twitter.com/wbUl7tGVzT

I’m crying at Mark goldbridge what a reaction 😂😂😂😂😭😭😭 pic.twitter.com/OREqsRIPyE