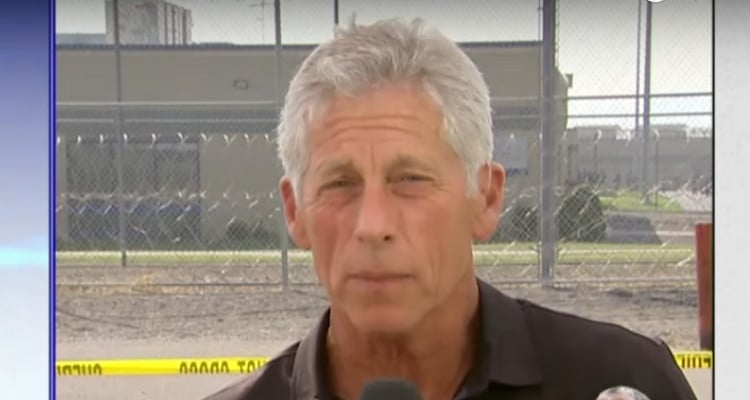 On Thursday (July 20), O.J. Simpson’s parole hearing was aired live. He served in prison for nine years and was granted parole which was covered by many news outlets. Mark Fuhrman joined Fox News to cover the major event. But where is Mark Fuhrman now? Find out what happened to Mark Fuhrman after the famous O.J. Simpson trial.

Former Los Angeles Police Department detective Mark Fuhrman and former football player O.J. Simpson have a history. Fuhrman was involved in the investigation of the murders of Nicole Brown and Ron Goldman. He was a part of the most famous trial of the century—the O.J. Simpson murder case.

O.J. Simpson was acquitted of charges for the murder of his ex-wife, Nicole Brown, and he friend, Ron Goldman. Keep reading to know what Mark Fuhrman is doing in 2017.

Fuhrman covered Simpson’s parole hearing last Thursday for Fox News. Simpson was sentenced in 2008 after he and accomplices barged into a room in Las Vegas and stole sports memorabilia. He was found guilty of 12 charges including three counts of conspiracy, two counts of kidnapping, burglary with a deadly weapon, assault, robbery, and coercion.

Fuhrman revealed that the detective who investigated the 2007 Las Vegas robbery case told him that Simpson was aware of the presence of guns in the room. However, Simpson told the parole board that he did not know about them.

“The parole board was lied to, but it didn’t matter, the fix was in. They were going to parole him.” Fuhrman said, adding, “You’re seeing a classic sociopath, a narcissist – maybe even a psychopath.”

“He cut the mother-of-his-children’s … throat almost through all the way to cut her head off. It boggles my mind how a man could actually live with that.”

Where Is Mark Fuhrman From?

Mark Fuhrman was born on February 5, 1952, in Eatonville, Washington. At the age of 18, he joined the United States Marine Corps, where he was trained as a military policeman and machine gunner.

In 1975, he was discharged after attaining the rank of sergeant. After his military career, Fuhrman joined the Los Angeles Police Academy and graduated in 1975.

In 1989 he was promoted to detective and, in early 1995, he retired after serving for almost two decades.

After his retirement, Fuhrman wrote a book called Murder in Brentwood, as well as several others. He is a forensic and crime expert for Fox News and has a radio show called, “The Mark Fuhrman Show.”

Fuhrman was one of the detectives who arrived at the murder scene of Nicole Brown and Ron Goldman. His partner, Robert Riske, found a left-hand glove covered with blood at the crime scene. Fuhrman was already aware of O.J. Simpson and Nicole Brown because of the 911 call made by Simpson’s ex-wife.

Fuhrman, along with some other detectives, went to Simpson’s residence. While there, Fuhrman found blood spots in and on a white Bronco, which was parked outside Simpson’s house.

Fuhrman climbed over a wall of the house without a warrant and let the other detectives in. During their investigation of the home, Fuhrman found the right-hand glove which was soaked with the blood of both victims. However, when Simpson put the gloves on during his hearing, they appeared to be too small for his hands.

Simpson’s defense team claimed that Fuhrman purposely planted the glove in Simpson’s residence because of racial discrimination adding that he wanted to frame Simpson for the murders. They played audio tapes where Fuhrman used the N-word as evidence. Later, Fuhrman pleaded no contest to perjury about his use of racial slurs.