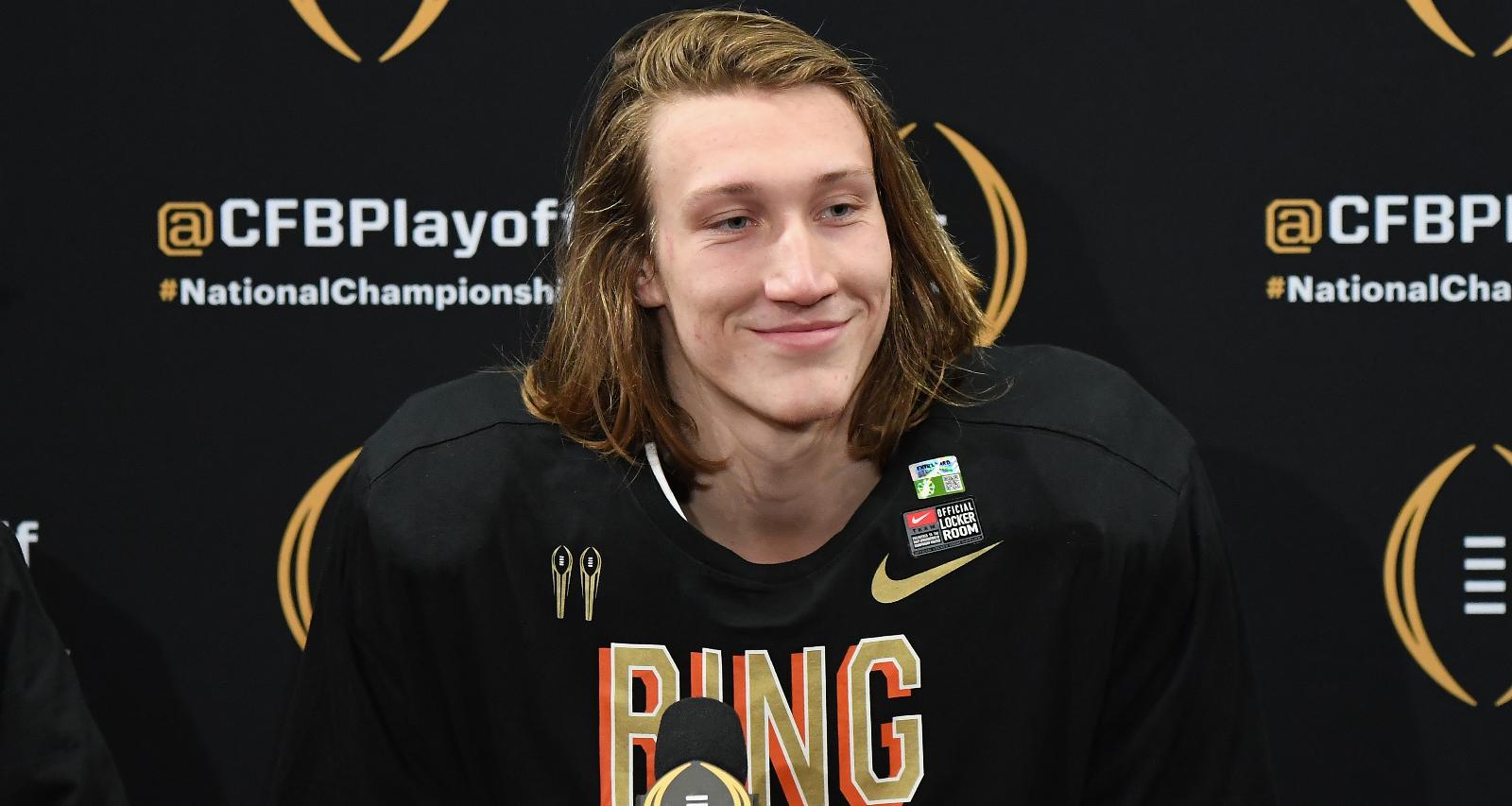 Trevor Lawrence #16 of the Clemson Tigers speaks to the media during the press conference after his teams 44-16 win against the Alabama Crimson Tide (Photo: Thearon W. Henderson/Getty Images)

Young collegiate athlete Trevor Lawrence, with his glorious mane of hair, has proven that he has what it takes to be a potential force in the NFL. And by his side is his ever-supportive and beautiful girlfriend, Marissa Mowry. The two are already showing they are a strong and inspiring unit with their philanthropy. This young couple is stepping up for those impacted by the coronavirus outbreak. Our Marissa Layne Mowry wiki turns the spotlight on Trevor Lawrence’s amazing girlfriend.

Marissa Layne Mowry, from Cartersville, Georgia, was born on November 10, 1999.

Trevor Lawrence, born in Knoxville, Tennessee on October 6, 1999, grew up in Mowry’s hometown of Cartersville.

They both attended Cartersville High School, where Lawrence was a highly rated quarterback in the state.

The couple celebrated two years together on May 23, 2018.

Mowry wrote in an Instagram post celebrating their anniversary that Lawrence had “awkwardly” asked her to be his girlfriend, leading to the best years of her life.

Seriously…how cute are they?

2 years ago Trevor awkwardly asked me to be his girlfriend.. but who knew two years later an awkward question would turn into the best years of my life. Thanks for being my best friend Trev. And for loving me unconditionally. I know our journey hasn’t always been the easiest but a bad day with you is better than a good day with someone else. Thank you for helping shape me into who I am today and pushing me to be my best self. Thank you for always encouraging my walk with God and being someone who I can rely on no matter what. Thank you for the best two years, I can’t wait for forever more💗

Mowry’s Mother Is a Realtor

Marissa Mowry is the youngest of three girls born to Steve and Kelly Mowry. Marissa’s father isn’t featured in any of her social media posts. She appears to have been raised mainly by her mother.

However, Steve Mowry’s obviously still in Marissa’s life. In 2016, Marissa set up a GoFundMe page on behalf of her father to raise funds for a mission trip to the Philippines. The page received $600.00 towards the $4,000 goal.

Kelly Mowry and her daughters, Marissa, McKenzie, and Miranda, call themselves the Mowry Girls.

Marissa is also an aunt, as one of her sisters has children.

Thankful is an understatement. Happy Thanksgiving from my family to yours!

Marissa’s mother attended college when she was 40 and went to real estate school when she was 47. The following year, in 2018, Kelly acquired her real estate license. Her daughters celebrated her achievements on their Instagram accounts.

Sister Miranda is also a realtor in Atlanta. So perhaps they could be a mother-daughter real estate force.

With his spectacular offensive skills, Trevor Lawrence was one of the top recruits courted by colleges. In December 2016, Lawrence committed to Clemson University in South Carolina to play college football.

Lawrence got an early start at Clemson before he and his girlfriend would graduate high school in May 2018.

It was bittersweet for the young couple, who briefly had a long-distance relationship while Melissa Mowry was in Georgia. Mowry attended a few of his games and Lawrence also returned to Georgia on occasion, including for senior prom.

Even if it was difficult for the young couple, Mowry and her family were ecstatic about his Clemson Tigers career.

And luckily their distance apart decreased when Mowry enrolled in Anderson University in Anderson, South Carolina. So the two are now less than 30 minutes away from each other.

About choosing that school, she said, “I just felt at home when I was there. I love the team and the girls and it’s an amazing program and school where I feel I can grow my walk with God.”

Mowry’s an Athlete, Too

Marissa Mowry is no stranger to the athletic life, being a talented soccer player in her own right. She got into the sport at the Darlington School Soccer Academy in Rome, Georgia, and played for her high school team.

Mowry committed to play soccer for the AU Trojans women’s team in early 2018. Lawrence even tweeted about it and seemed to be ecstatic (understandably!) that his girlfriend would be in South Carolina, too.

Congrats to this girl on committing to Anderson University today to play soccer! I’m excited to see what’s in store for you 😘❤️ pic.twitter.com/w5poP6GIqM

Former AU women’s soccer coach Julie Davis Carlson said about the new recruit: “Marissa has a lot of upside. She is a solid athlete with good awareness. She has good shooting range and ability to find players in behind.”

Mowry, a forward, has played in nine games overall in her freshman career. She has yet to record more stats.

While doing pretty well as a student-athlete, Mowry is also gaining traction with her modeling career.

Signed with MP Management in Atlanta, she has modeled for Georgia-based Love June Boutique.

Mowry’s hasn’t had many other modeling gigs yet, though she has shared some photo shoots with professional photographers on her Instagram.

Mowry Set up a Coronavirus Fundraiser

Lawrence and Mowry, who are active in their charitable efforts, started a GoFundMe page on March 23 for those impacted by the COVID-19 pandemic. The crowd-sourced funds are intended to go to family relief and support for infected victims.

However, Clemson compliance officials soon told the young couple to take down the page. Based on the NCAA policy that does not allow the use of athletes’ names, images, and likeness for crowdfunding, Clemson initially quashed Lawrence’s efforts to raise money for charity.

But the problem lasted only briefly. The NCAA allowed Lawrence and Mowry to continue the GoFundMe campaign this past Tuesday. The NCAA issued a statement that they would  make an exception for student-athletes trying to help out during the global pandemic.