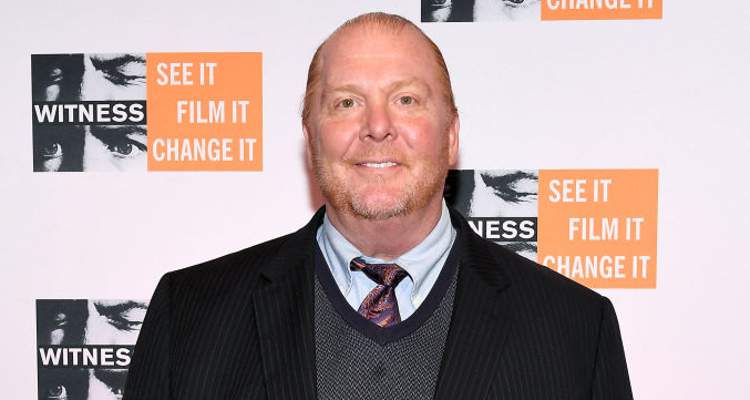 Celebrity chef and television personality Mario Batali, who has been accused of sexual harassment, has stepped down from business operations, reports say. The chef, a fan-favorite on Iron Chef and The Chew, will also not appear on TV until the allegations are investigated. Batali has made millions from his award-winning restaurants, television shows, and cookbooks. But will the charges against him affect Batali’s estimated net worth of at least $25.0 million? Keep reading to find out!

Mario Batali’s name is synonymous with restaurant success. A master in the gastronomic arts, Batali has gone on to build an incredible empire through his restaurants that spread across the U.S. and the world. And with a few hit TV shows, success followed the chef everywhere.

But now all eyes are on Batali after sexual harassment accusations against him went public, and many are wondering if his net worth and career will take a hit.

How wealthy is the celebrity chef? What is chef Mario Batali’s net worth in 2017? Find out everything you need to know, right here.

The Man Behind a Restaurant Empire

Born on September 19, 1960, in Seattle, Washington, Mario Batali’s age is 57 years. He pursued Spanish, theatre, and economics at the Rutgers University, but the kitchen soon came calling. Batali received culinary training at the prestigious Le Cordon Bleu in London.

Batali rose to fame with the show Molto Mario on the Food Network in 1996, and since then has gone on to partner with Joe Bastianich to form the B&B (Batali and Bastianich) Hospitality Group.

The group owns several famous New York restaurants like Del Posto and Babbo, and each of them holds a Michelin star. One of the group’s other restaurants, Eataly reported a gross revenue of $70.0 million in only its first year! The group’s annual revenues were, reportedly, $250.0 million in 2012.

Along with owning successful restaurants, Batali has also left his mark on television. From appearing on Iron Chef with other celebrity culinary artists to the orange Crocs-wearing maverick on The Chew, Batali was a force to be reckoned with in the culinary world.

Batali has also written several cookbooks and has developed many sought-after kitchen products including a well-known pasta sauce, and other Italian food.

With such a long and accomplished career, it is no wonder that Mario Batali’s net worth is $25.0 million.

Take a look at how Batali’s net worth compares with some of his culinary peers, and you’ll see that Batali’s culinary skills have taken him right to the top.

Mario Batali and Susi Cahn recently celebrated their wedding anniversary in Paris and Batali shared a picture on Instagram.

Happy anniversary weekend to the love of my life !! #wheeeeeee! #paris2017?

Mario Batali’s house in Lake Michigan is a place where the family likes to escape from the fast life of New York. Batali’s home has an outdoor kitchen which the family loves to use. It is equipped with a smoker, grill, and a pizza oven. They also have a grill pit for some yummy roasts on cold days!

Batali’s empire seems to be crashing down on him with the sexual harassment allegations that have come to light. At least four, unnamed women have accused the chef of groping and touching them inappropriately while they worked for him.

After Mario Batali’s news broke out, television networks have suspended his shows, and Batali has stepped down from business operations at B&B Hospitality Group.

Batali expressed regret for his actions. In a statement released yesterday, he said, “I apologize to the people I have mistreated and hurt. That behavior was wrong, and there are no excuses. I take full responsibility and am deeply sorry for any pain, humiliation or discomfort I have caused to my peers, employees, customers, friends, and family.”

Batali was cautioned by B&B Hospitality Group for inappropriate behavior in October 2017 and had to undergo added sexual harassment training.

It was the first formal complaint against the chef, but now more women have stepped forward and shared their experiences. So, until the investigations are completed, we must wait to know all the details.