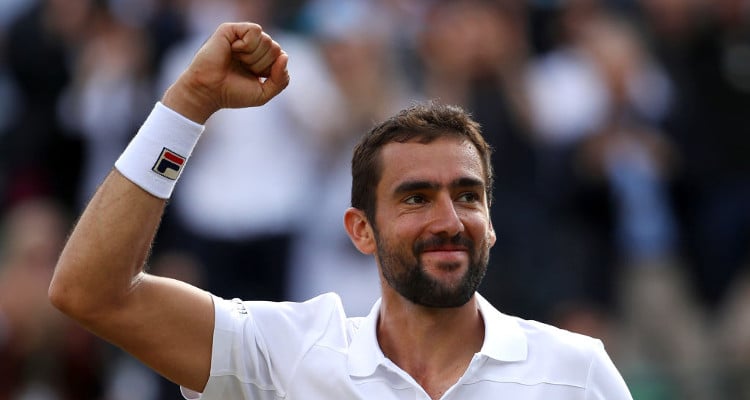 Marin Cilic (pronounced “Chilich”), is a Croatian tennis pro with a No. 6 world ranking, just one place below Roger Federer. The right-handed player is reaching for the top and has all the skills to make it there. He was the center of controversy in 2013 when he failed a drug test, but the pro was back in action before you could notice. Marin Cilic’s Wimbledon 2017 matches are getting more interesting to watch after he defeated Gilles Muller in the quarter-final. As we approach the end of Wimbledon, there is a lot to know about the talented tennis player. Is Marin Cilic married? Does he have a girlfriend? If you want details about Marin Cilic’s net worth and more, we have what you need to know in our Marin Cilic wiki.

Born on September 28, 1988, in Medjugorje, Bosnia- Herzegovina, Marin Cilic’s age is 28. He was born to Zedenko and Koviljika Cilic, and has three brothers: Vinko, Mile, and Goran. His father wanted to give his sons the opportunity he never had to play sports, and in 1991, when a tennis court was newly built in their town, Cilic and his friends were the first few to play. In 1995, his interest in tennis grew after his father took him and his elder brother, Vinko, to a tennis club in a neighboring town. Cilic was eight years old when he won his first trophy and made it to the semi-finals of the 10 & Under tournament. In 2002, due to lack of sports facilities in his hometown, Cilic moved to Zagreb, Croatia, where Andrej Tonejc (his coach for the next three years) invited him to learn how to play professionally. Cilic now lives in Monaco, France, with a No. 6 world ranking of and an even brighter tennis career ahead of him.

The moment that I will remember for a lifetime! It's been almost 12 years since my biggest junior success and victory on #junior #RolandGarros! ?? #tb

Cilic started playing as a boy and is now a professional tennis player with many titles and trophies to call his own. He won his first place trophy in the ITF in Mostar which is close to his hometown. In 2005, he beat Andy Murray in the French Open, juniors title. It was in 2007, that Cilic received a wild card in Wimbledon, which was his first appearance at the tournament. In 2013, he faced a ban of nine months after failing a drug test. The glucose levels in his blood were higher than usual which was reportedly caused by taking some supplements over the counter. But after the ban, Cilic returned to tennis and was named one of three Croatian players to have won at least 10 titles in their career. In 2014, Marin Cilic won the U.S. Open after defeating big names like Kevin Anderson, Tomas Berdych, and Roger Federer. In 2006, he came second at the Open 13 Provence in Marseilles. The last we saw Cilic was in Wimbledon 2017, when he defeated world No. 26 Gilles Muller in the quarter-final match.

Thank you, #TeamCilic fans, for your constant support. ❤ ️️#Wimbledon #London

Who is Marin Cilic dating? This is a question that everyone wants answers to! The lucky woman is Kristina Milkovic. She is a psychologist by profession and wants to keep her life private away from the eyes of the media. But, we do know that she has been dating the 6’6” tennis pro for seven years now. Milkovic is a double graduate from the University of Zagreb with one degree in political science and the other in psychology. Milkovic speaks Croatian, Spanish, English, and Italian fluently and the beauty was called Cilic’s lucky charm by the tennis pro himself after his first ATP 500 level title. Very lucky and very charming indeed! Though Marin Cilic’s marriage is on some people’s minds, we cannot confirm if the couple is ready to tie the knot. But whenever that might be, we are sure they will make an amazing family!

We can only imagine the popularity the world No. 6 is gaining, but what is he earning? It is estimated that Marin Cilic is worth a stunning $16.3 million. The player reportedly gets a salary of $4.5 million excluding his prize money. Here’s a look at Marin Cilic’s earnings and net worth: