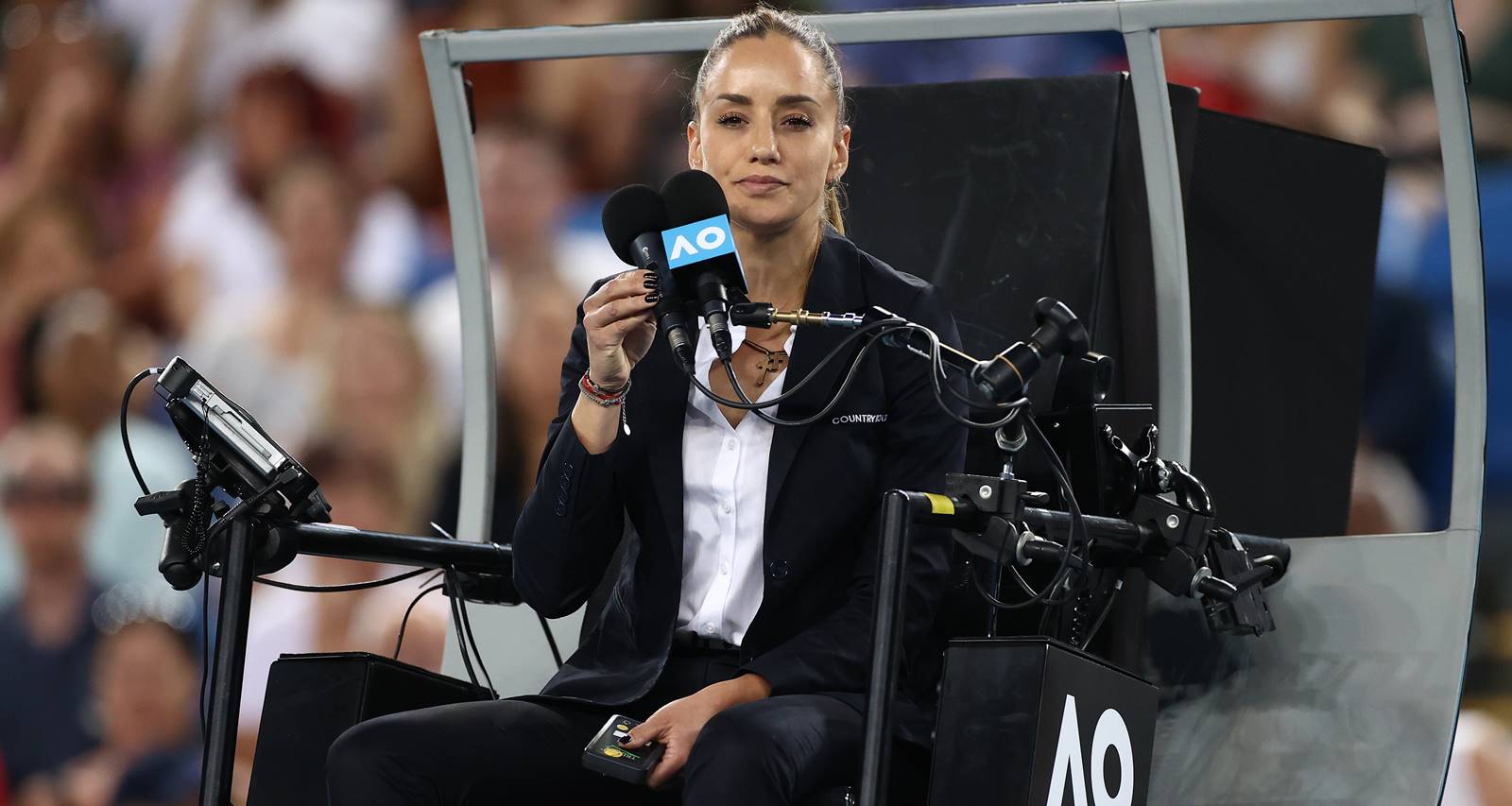 Chair Umpire Marijana Veljovic looks on in the Men's Singles third round match between Alexander Zverev of Germany and Fernando Verdasco of Spain on day six of the 2020 Australian Open at Melbourne Park on January 25, 2020 in Melbourne, Australia. (Photo by Hannah Peters/Getty Images)

Roger Federer had a narrow victory against Tennys Sandgren at the Australian Open quarterfinals on Tuesday. But it’s hardly getting as much attention as it should. Not when the match’s chair umpire attracted eyeballs with her beautiful presence alone. Thanks to Eugenie Bouchard pointing it out, the gorgeous umpire, Marijana Veljovic, is the talk of the town. She issued Federer a warning during the third set for bad language. And honestly, the Internet would have loved it had Federer and Sandgren given the umpire more reasons to intervene—just so Veljovic could be on our TV screens a lot more. If you’re one of the new joinees to this umpire’s growing legion of besotted fans, this Marijana Veljovic wiki is the perfect primer for you.

Born on January 24, 1987, Marijana Veljovic is a native of the Serbian city of Kragujevac, where she still resides with her family. After graduating from II kragujevacka gimnazija, a high school in her hometown, she reportedly studied law in the Serbian capital of Belgrade.

“I grew up there, I know every stone and tree,” Veljovic said about Kragujevac. “Šumarice Memorial Park  is my oasis, but I’m also used to being on the move. Belgrade is also in my heart, because I spent a lot of time in it before.”

As a young child, Veljovic was drawn to the sport of tennis. After trying out different sports, she started playing tennis when she was nine. She excelled in her academics while continuing to play. But, according to her, she was never quite good enough to go pro.

Veljovic Is a Gold Badge Umpire

Veljovic continued playing tennis until she was in university. But by her own admission, she wasn’t professional-level ready.

“Let’s say, I was not really good enough to be a professional tennis player or the situation back then wasn’t really going my way, in that way. I continued playing tennis until I got to university basically, and then by chance, I got this information about the umpire school in my national association,” recalled Marijana.

When she was competing at the university level, she met a tennis referee who suggested she could be a judge. But it wasn’t until the following year, when the Serbian Tennis Federation was organizing a school to train umpires in the sport, that  she considered it as a possible profession.

After applying and passing the tests, she enrolled in umpire school and ended up as one of the top students to graduate from the institution. She’s had opportunities to oversee matches from the chair several times since 2010.

And while she was unsure of herself early on in her career, she’s since excelled in her job. Now she travels the world to umpire at international tournaments.

She progressed in her career at a rapid pace, advancing from a silver badge to a gold badge in 2015. Back then, she was only one of six women in the world to hold a gold badge status.

As a gold judge, she runs matches for some of tennis’ greatest stars like Roger Federer, Serena Williams, Rafael Nadal, Caroline Wozniacki, and more.

She may be all over the Internet right now, but this is far from Veljovic’s first rodeo. She’s mostly done Grand Slams, and has been in the chair during the Australian Open, the Roland Garros, and even the Rio Olympics.

She’s part of an ITF Development team that supports umpires. A 2018 ITF feature on umpires focused on Veljovic ahead of the 2018 Davis Cup final.

She described being able to have a job in the sport she loves and watching Wimbledon from the best seat in the house as a “dream come true.” She also hoped to see more women as tennis officials in the future and participated in ITF workshops to support more female officials in the sport.

She Called Out Federer for Cursing

Roger Federer made it to the Australian Open semifinals after defeating Tennys Sandgren in the quarterfinals on January 28. But it’s a rare instance when Federer isn’t the one getting the attention.

Marijana Veljovic has been on the chair for a few matches this tournament. And while the umpires and players don’t socialize, she’s not unfamiliar with Federer.

For instance, in 2017, she was the judge at Federer’s match against Sascha Zverev, where Federer did the gentlemanly thing of advising Zverev to challenge a fault. Zverev and Veljovic did so and the decision was in Zverev’s favour.

At the Australian Open quarterfinals, Federer was near defeat at the hands of Sandgren. And perhaps the frustration got to the maestro, who let out a few curses on the court.

But Veljovic isn’t one for ungentlemanly behavior, and gave Federer a warning for bad language on the court. Thanks to that, the cameras got a good look at the gorgeous umpire who ended up enrapturing the Internet.

Tennis fans even agreed with Eugenie Bouchard, whose tweet summed up the difficulty of focusing on the two players with the beautiful umpire on the chair distracting them.

the umpire in this roger/tennys match is super pretty 😍

But don’t peg Marijana Veljovic as just a pretty face. She’s very good at her job, and she’s also an inspiration for more women to become tennis officials.

“Whether you are a girl or a guy, if you do well and they think you’re good enough to do the biggest matches like a Davis Cup final or a Grand Slam, it feels amazing that our sport is allowing us that,” as Veljovic put it. “Are we going to determine is she good enough really, because it’s ‘only’ a female? Can she really do it? If we start thinking from that side I don’t think it’s fair and it’s good, so yeah, I feel that tennis is giving us the right opportunities.”