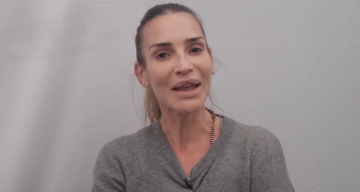 Adolfo Cambiaso is not only a legend in the sport of polo, but he’s also a pioneer in cloning horses. Cambiaso and his cloned horses were the subject in this week’s segment of CBS’ 60 Minutes. While Cambiaso and his unconventional horse breeding are attention-grabbing, his family, particularly his beautiful wife, Maria Vazquez, deserve a spotlight.

Maria Vazquez Is a Model from Argentina

Maria Vazquez, age 43, hails from Argentina like her husband, Adolfo Cambiaso. She had a thriving career as a model and presenter in her home country.

She began modeling at the age of 17 and rose to fame as a prominent TV personality in Argentina. She famously appeared on the TV show, Showmatch, on Eltrece TV.

Her modeling credits are not known, but judging from Maria Vazquez’s Instagram account, this former model can still take a gorgeous photo.

Cambiaso and Vazquez got married in 2001. Now, Vazquez is a bigger presence at polo games where Cambiaso is playing. Some even refer to her as the “First Lady of Polo.”

And while he’s a legend in the sport, Cambiaso and his wife are very grounded.

“I still have the same house and I have enough for a good life,” said the polo player.

Adolfo Cambiaso’s wife is always at his games to support him, and he refers to her as his biggest motivation.

They Have Three Children

Vazquez and Cambiaso are parents to three kids. Their daughters Mia and Myla were born in 2002 and 2010, respectively. Their only son, Adolfo Jr., was born in 2005 with rather eventful timing.

Cambiaso was in the middle of a qualifier during the 2005 Argentine Polo Open when Vazquez was about to give birth to their second child. The professional polo star left in the middle of the game to be present for his son’s birth.

Among the Cambiaso-Vazquez kids, their oldest child, Mia, is already showing she’s inherited her father’s equestrian genes. She has displayed incredible polo skills at championships and is touted to take over her father in the sport.

According to her parents, Mia grew up around horses and took to polo like a natural. Her parents didn’t have to push her into the sport in any way.

Like his sister, Adolfo Jr. is also venturing into polo. However, he’s still building his accomplishments to match his father and sister.

Their youngest child, Myla, appears to be following her mother’s footsteps into modeling. Vazquez shares pictures of her daughter’s photo shoots, and what can we say, like mother like daughter!

Most recently, Myla did a Frida Kahlo-esque photo spread for a kids’ clothing collection, Cosmo Sur.

While we’re sure his cloned champion horses will continue to make headlines, don’t be surprised to see Maria Vazquez and Adolfo Cambiaso’s children in the limelight in the near future, too.