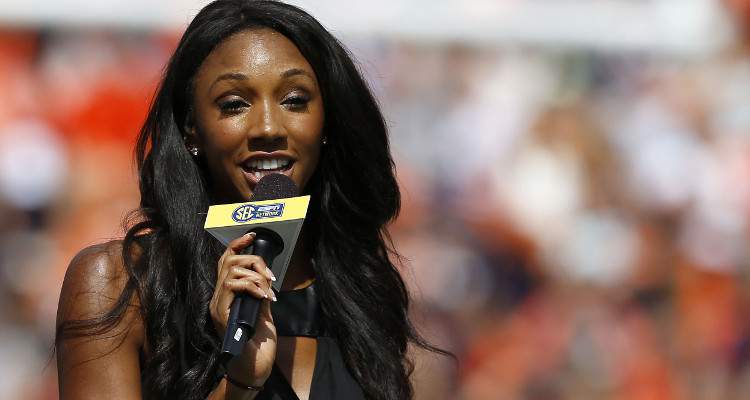 Maria Taylor started gaining buzz a few months ago, after the ESPN reporter experienced an awkward sideline interview with basketball coach, John Calipari. She is currently the sideline reporter covering the Rose Bowl, a major event in college football. But it was during the college basketball games that she emphasized she’s more than just an ESPN reporter.

ESPN sideline reporter Maria Taylor is extremely good at her job as one of the few women in sports broadcast, and now, she’s getting the opportunity to cover one of the biggest events in college sports; the Rose Bowl. She has sat down with college star players to discuss their future, many of which involve a possible NFL career. She came into the spotlight back in November when she was covering college basketball and since then, fans can’t stop gushing over her hot pics on Instagram.

While interviewing the University of Kentucky basketball team’s coach, John Calipari after their loss, the frustrated coach squeezed her arm and held on tight during the interview. She kept her professional composure as he held he arm, jokingly told Calipari that she’s not one of his players, and finished the interview with panache. Though it caused an uproar on Twitter, she clarified there was no sexual harassment going on and it wasn’t an awkward moment. Calipari was also conscious of his behavior but it seems viewers read too much into it. In fact, she emphasized that she has interviewed Calipari several times and she’s not just some reporter who got harassed like they are making her out to be. She’s the Maria Taylor! Her super cool response and her rallying behind real victims of sexual harassment makes Maria Taylor one of the hottest and awesome reporters out there. Take a look at the gorgeous pics from this amazing woman’s Instagram, right here.

#2. Looking fabulous is part of her job.

Day 2 at the @rosebowlgame in the books….

#3. There’s no raining on her parade!

#8. The grass is most definitely greener on this side.

Now all I need is a set of clubs…

#9. Ravishing on the Rooftop!

#12. That perfect photo op when you got the wind in your hair.

Oh hey wind…thanks for stopping by the show! ???

#14. We got no troubles, life is the bubbles, under the sea!