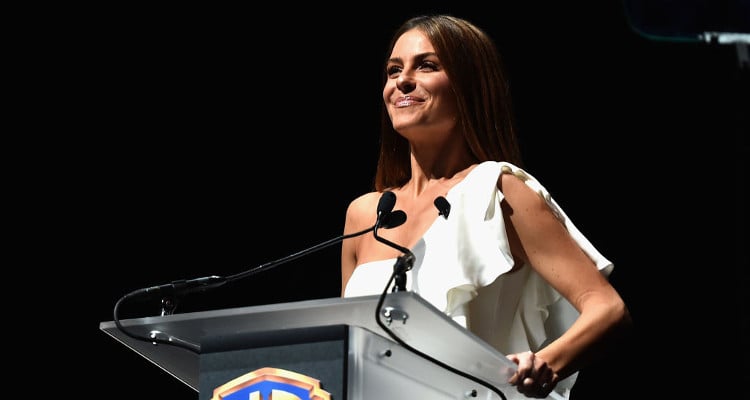 Maria Menounos recently announced that she is stepping down from her hosting duties on E! But that isn’t the most shocking part. The Hollywood insider has been battling a brain tumor, and is now recovering from surgery.

Hollywood insider, Maria Menounos shocked the world with her announcement that she was diagnosed with a brain tumor. She has resigned as a host from E! and is on the mend after surgery. But she’s a fighter, and she has some big plans in her personal life involving her fiancé. Here’s what you need to know about her condition and more in our Maria Menounos wiki.

She was a Pageant Queen

Maria Menounos was born in Medford, Massachusetts in June 1978, which make her 39 years old now. Her parents, Costas and Litsas, are Greek and worked as janitors in a Boston nightclub. She also has a younger brother named Peter.

In 1995, she began competing in pageants and the next year, she was crowned Miss Massachusetts Teen USA! She went on to compete in Miss Teen USA, where she made it to the Top 15. She competed in the Miss Massachusetts USA pageant in 2000 and was runner-up.

Menounos was studying at Boston’s Emerson College, where she worked as a reporter for Channel One News. During her time there, she reported on the 2001 El Salvador earthquake, interviewed NATO crew members, and even interviewed President George W. Bush.

She reported on movies, music and fashion for Entertainment Tonight and Access Hollywood. She was also co-host on a few episodes of the Today show. She had a brief acting career with minor roles. Her most notable movie credit was playing a nurse, who was romanced by Johnny Storm (Chris Evans). She also had a recurring role on One Tree Hill.

She partnered with Derek Hough on Dancing with the Stars Season 14 and made it to the top 4. She also had her own reality series, Chasing Maria Menounos. After three years as a host on Extra, she joined E! Entertainment. Following Giuliana Rancic’s controversial departure, Menounos was her replacement. Throughout her entire career, she has earned a net worth of $7.0 million thus far.

Isaiah was my inspiration going into brain surgery. I met him while hosting the @runwaytohope event for childhood cancer just before my surgery. He already has endured 28 brain surgeries. I pulled him aside and asked him if he got scared before surgery. He thought for a second and said no. I knew god put him in my path for a reason. What an inspiration HE js. I was so grateful to be part of this special charity that helps families who are struggling. If you are interested in donating please go to their website http://www.runwaytohope.org/donate.html .

She is a Part-time Wrestler

Menounos is not someone you can mess with, mostly because she can actually beat you to a pulp! The longtime WWE fan has made several promotional appearances. She guest-hosted Raw and made her in-ring debut in 2009 with a six-diva tag team. Her team won in 2009 and again during her second run in 2011.

During her wrestling career, she had an on-camera feud with Beth Phoenix. The feud began when Menounos slapped the large-statured Phoenix during her debut tag team match. After an explosive interview, she partnered with Kelly Kelly to take down Phoenix and Eva Torres in Wrestlemania 28, pinning Pheonix down for the win.

❤️these two:) thank you for the ❤️guys ..your friendship means everything ?

The E! host has been in a relationship with director and producer, Keven Undergaro since 1998. Together, they own the online entertainment network, AfterBuzz TV. The couple met under very interesting circumstances.

Undergaro was producing an independent movie, which was stolen, leaving him bankrupt. The silver lining however, was that he met Menounos, who was 19 at the time. He gave up his hard-partying lifestyle and changed for the better, thanks to Menounos. Her father initially disapproved of him because he was a non-Greek, but he eventually came around. After 19 years of dating, Undergaro proposed to Menounos live during an interview with Howard Stern!

omg this happened!!!!!!! thank you @sternshow @bethostern so much for everything I'm in utter shock! And thank u my love for 19 amazing years. Can't believe we are engaged!!!!

We’re not just talking about her WWE victories. Menounos revealed she was diagnosed with a tumor in April and underwent a seven-hour surgery that removed almost all of the tumor. At the time, Menounos was taking care of her mother, who herself is battling brain cancer.

After the surgery on her birthday, she stepped down from her hosting duties on E! to recover completely. But she’s got big plans for the future! The journalist has been vocal about her IVF treatments and is very keen on having a family. More power to you, Maria!

First I wanna say thank you all for the well wishes, prayers and support. It's been a crazy time here in our home. I want you all to know that I'm ok! Seriously I'm recovering well and should be as good as new very very soon! Luckily I don't need any further treatments but I can't say the same about my mom. So please keep her in your prayers. I also want to thank @people for allowing me to share my story. @juliejordanc & @mrjesscagle THANK YOU' Next-I need to thank everyone at @cedarssinai everyone there has been amazing. Most people want to rush out of the hospital to get home I kept saying I've never been treated kinder. I cried like a baby saying goodbye to the amazing nurses who took such good care of me. God bless nurses! I of course need to thank dr black and dr Chu for performing an amazing surgery and giving me the best bday gift ever-my health. And lastly, god has blessed me in so many ways but this too was a blessing. I got to hear what I have meant to my friends and family-it's been quite moving for me. I want thank all of my incredible friends, family and even strangers who have shown me and my family such kindness. @alyssawallerce Thank you for being with me every step of the way. I couldn't have done it without you. @iamjoegear You too! And to @undergaro the best nurse in the world..you never left the hospital and slept by my side there. you are my everything and I'm so thankful to you. You and dad have really been incredible to mom and me. You both have inspired me. I've never been more excited about life. I see so much so clearly. Will share more with all of you soon! Xo