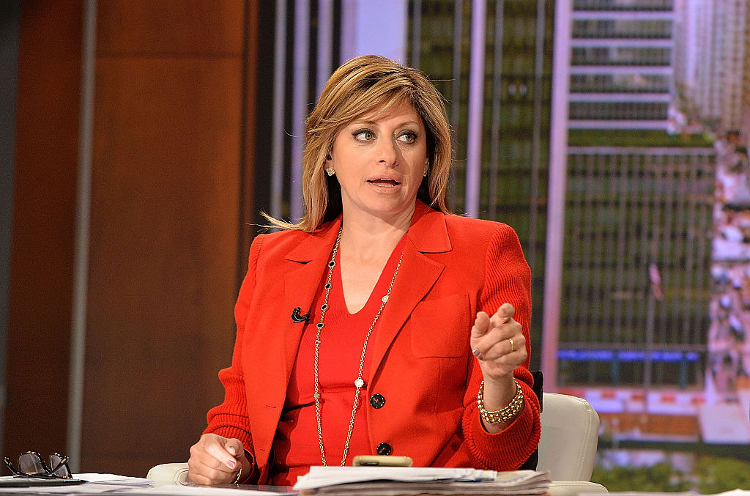 Maria Bartiromo has made a name for herself in the field of TV financial journalism. Throughout her lengthy career, she has proved that being a woman is no impediment on succeeding in the professional world, especially in a field traditionally dominated by men. She earned the nickname “Money Honey” due to her striking good looks and expertise in matters of finance.

Maria Bartiromo is an American television journalist, magazine columnist and author of three books. She is the host of Mornings with Maria and is the Global Markets editor at the Fox Business Network. According to the Maria Bartiromo wiki page, she is also the host of Sunday Morning Futures with Maria Bartiromo on the Fox News Channel. Recently, she is in the news for a reason other than her usual sharp reporting. She attended the Al Smith charity dinner on October 20, 2016, where Donald Trump and Hillary Clinton traded jokes and roasted each other. However, Maria Bartiromo stole the show with her stunning, revealing dress that left little to the imagination!

Bartiromo was born to Italian-American parents, Vincent and Josephine Bartiromo. She attended Fontbonne Hall Academy in Bay Bridge and then graduated from New York University with a Bachelor of Arts degree in journalism and economics.

Bartiromo started her career with a five-year stint at CNN Business News, as a producer and assignment editor. She then joined CNBC, where she began reporting live from the floor of the New York Stock Exchange. Bartiromo was nicknamed “Money Honey” in the late 1990s, due to her good looks and the fact that she was the first woman to report live from the noisy floor of the New York Stock Exchange. In fact, in January 2007, Bartiromo filed trademark applications to use the term “Money Honey” as a brand name for a line of children’s products including toys, puzzles and coloring books to teach children about money!

Bartiromo hosted several programs on CNBC, including The Business of Innovation, Closing Bell, Market Wrap, and Business Center. She also appeared on several TV shows such as The Tonight Show with Jay Leno, Late Night with Conan O’Brien, The Oprah Winfrey Show and Real Time with Bill Maher. She has also appeared in a few films and documentaries. She acted in the films Risk/Reward, The Taking of Pelham 123, Wall Street: Money Never Sleeps and Arbitrage.

Bartiromo has also written three books so far, which have appeared on The New York Times, The Wall Street Journal and USA Today’s bestseller lists. On November 18, 2013, it was announced that Bartiromo was leaving CNBC to join the Fox Business Network. Bartiromo has received many awards for her groundbreaking work in financial journalism. She has received two Emmy Awards for her news breaking stories. In 2011, she was the first journalist to be inducted into the Cable Hall of Fame.

In 1999, Bartiromo married Jonathan Steinberg, the CEO of Wisdom Tree Investments. Bartiromo has been a trailblazer in the field of journalism throughout her career. Her work in TV journalism has opened the door for women to carve out a career for themselves in this field. Bartiromo is a great role model for many girls who look forward to having a career in TV journalism. Given her past achievements, there is no doubt that Bartiromo will chart new courses and continue to lead a great example for young, professional women everywhere.