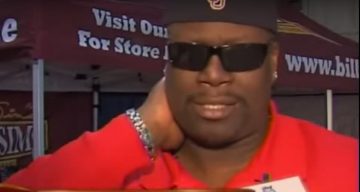 Ever wondered what happened to Marcus Dupree? Yes, we’re talking about the famous footballer. But, where is Marcus Dupree now? We’ve got the latest details, including information on Marcus Dupree’s net worth.

In an Oklahoma uniform of sorts yet again, this time around Marcus Dupree isn’t playing football or gunning for the Heisman trophy. Now 52, the former heralded football recruit, whose career tragically vanished almost within no time, has now set foot in the pro-wrestling ring! Yes, you read that right; he’s wearing No. 22 for the Crowbar Championship Wrasslin’ (CCW).

When Dupree was questioned about his wrestling career, he said, “I just like to make people happy. We do the wrestling events to see kids cheer and see kids’ faces smile to it like I did when I was younger.”

Read on to know more about the footballer-turned-pro wrestler in our Marcus Dupree wiki.

Born on May 22, 1964, Marcus Dupree grew up in Philadelphia, Mississippi. Back then, Dupree playing football in school had attracted national attention. He was a sought-after college recruit playing for Oklahoma and was named Football News’ “Freshman of the Year.”

In the middle of his sophomore year, Dupree left and briefly attended the University of Southern Mississippi. While finishing college at the university, he played spring football for the Golden Eagles.

In 1984, he joined the United States Football League and signed with the New Orleans Breakers. He played with them for two seasons before he was forced to leave the game because of a knee injury.

Dupree returned to professional football in 1990. He played in 15 games over two seasons for the Los Angeles Rams, before being waived prior to the 1992 season.

Not much is known about his personal life except that he has three sons—Marquez, Landon, and Rashad. He also has a grandson.

Dupree signed with the USFL, playing for the New Orleans Breakers. But due to his injuries, he had to sit out for most of his games.

It was in 1985, Dupree earned the starting position for the season opener against the Arizona Outlaws, during which he suffered that knee injury that ended his career with the USFL.

Once he recovered, he signed with the Los Angeles Rams in the NFL, but once again, suffered an injury and had to sit out for the first seven games. Sadly, he was cut from the team as his coach, Chuck Knox, thought his performance wasn’t up to the mark. And soon after, Dupree decided to retire.

Unfortunately, this is how his career as a footballer ended. But he didn’t give up, and now, he’s gone on to become a USWA Professional Wrestler, while also running a sports bar and working in a casino.

Marcus Dupree’s net worth has been estimated at $10,000, according to sources.

Although his career as a footballer didn’t last too long, he sure managed to win hearts all over the country.

Marc Connolly from ABC Sports Online, aptly said, “For every Marcus Allen, Barry Sanders or Emmitt Smith, there’s an Anthony Thompson, a Paul Palmer and a LeShon Johnson, guys who never matched their college success in the NFL. Some of the unfortunate ones were too small. Others were just a step too slow.”

Connolly continued, “But you’ll also find a select few individuals who had all the tools. They’re the ones who didn’t achieve NFL success for reasons of circumstance. Such was the case with Marcus Dupree, a star running back who lit the college football scene on fire as a freshman in 1982.”