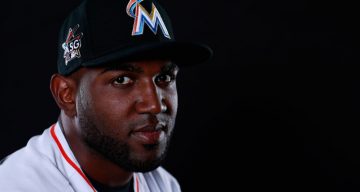 MLB player, Marcell Ozuna of the Miami Marlins showed off some mad skills when he sent a ball flying in Wednesday night’s game. As impressed as we are, we’re sure Marcell Ozuna’s wife, Genesis Guzman, is even happier.

The Miami Marlins defeated the Tampa Bay Rays in Wednesday night’s (May 3) game at the Rays’ home at Tropicana Field. But who’s talking about that? We’re more interested in Marlins’ Marcell Ozuna’s titanic hit! The center-fielder hit the ball so fast and so hard, that all analysts could do was predict how far it would have gone had it not hit smashed the Tropicana Field’s banner hanging 75 feet above ground. His wife, Genesis Guzman, is either happy or disappointed, perhaps both. Here’s more about Genesis Guzman and Marcell Ozuna in Genesis Guzman’s wiki.

Marcell Ozuna tends to keep his personal life out of the media. So, there’s not much known about the 26-year-old’s life outside baseball. Genesis Guzman also keeps her Instagram private. Perhaps the most we’ve seen Ozuna talk about something other than baseball was when his teammate, Jose Fernandez, passed away tragically.

How the two met, how long had they been together, and what their wedding was like has been kept under wraps from the media. We do know that the couple has three adorable children: a daughter, and two little boys, who Ozuna just loves posting about on his Instagram.

Ozuna and four of his teammates —Nathan Eovaldi, Tom Koehler, Steve Cishek, Kevin Slowey— were going to be first-time fathers at the same time in 2014. Ozuna and Guzman’s daughter was born that year, a few days before Christmas. The four Marlins joked that they planned it heading into the off-season.

#2. She had a Delivery Scare

Back in August last year, when Guzman was pregnant with their third child, the Marlins were playing against the Kansas City Royals. She was watching the game when she experienced pain and contractions. A six-month pregnant Guzman was transported from Marlins Park to a hospital. Ozuna was apprised of her situation between the game. He wanted to stay in the game, but reconsidered later and left to be with his wife.

He returned to the clubhouse the next day with a sense of relief saying, “She’s OK, the baby’s OK, everything is OK. She felt contractions a little bit, but it’s not time yet.” But the brief time the couple spent in the hospital wasn’t any less worrisome. At one point, the doctors were discussing surgery.

Thankfully it didn’t come to that. Ozuna was back to playing, but this time his wife wasn’t cheering for him in the stands. Instead, she was at home resting. “I told her, you want me to stay [home]? She said, ‘Go play for me.'”

In the same game that had Ozuna smashing a Rays’ 2011 American League Wild Card banner, Guzman showed she can handle the bat and gloves, too! The wives and girlfriends of the Marlins and Rays engaged in a little pre-game spectacle. The ladies had a softball game before the guys took the field and Guzman impressed her man, and the fans! Go girl!

Marcell Ozuna’s wife stepped up to the plate to hit. The video shared by ESPN shows Genesis Guzman hit a jaw-dropping home run! The Rays should hide their banners anytime the Ozuna couple steps on their home field! We only hope the little Ozuna’s will grow up to be home run hitters like their parents!