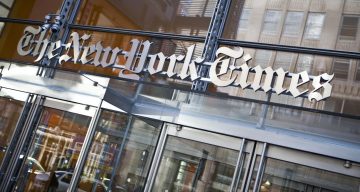 The New York Times logo is seen on the headquarters building on April 21, 2011 in New York City. (Photo by Ramin Talaie/Getty Images)

Mara Gay is a familiar name to readers of The New York Times as she has been writing some impressive articles lately on contentious issues that concern the people, especially in the realm of politics. She studied political science at the University of Michigan, and her hobbies include running and trying out new cuisines. Her parents are in an interracial marriage and a constant source of inspiration for her.

Those who have read The New York Times and The Wall Street Journal have undoubtedly read the impassioned articles written by Mara Gay over the last few years. She has written extensively on issues affecting people in both New York City and the country at large and brought clarity to many controversial topics. People are curious to know more about this brave journalist, so here are a few facts from Mara Gay’s bio and LinkedIn account.

She Writes for The New York Times

Mara Gay is a member of The New York Times‘ editorial board where she writes about the city, state politics, and other New York issues. She joined The New York Times in April 2018 and has made a mark with her incisive, in-your-face, and honest writing. She covers the Greater New York City Area on her beat.

Before this, she had worked as a reporter for The Wall Street Journal for the past five years, covering the Greater New York area. During her time at the WSJ, she was the City Hall bureau chief for the prestigious publication.

She started her journalism career in September 2008 as a staff editor and fellow at The Atlantic Wire, where she worked for more than a year till December 2009. She then joined AOL News as a breaking news reporter in January 2010, and remained there until May 2011.

Working at AOL News was a great learning experience for Gay as she was busy with reporting original news stories and aggregated content; covering local New York City, national, and international news; and writing several high-traffic stories every day on a range of issues.

Gay then worked as a national enterprise reporter for The Daily for a year and a half. She earned a solid reputation as a writer of original  people-driven stories, as well as articles on national politics, the impact of Hurricane Sandy, and the death and rebirth of the city of Detroit, Michigan.

Before joining the WSJ, she also had a four-month stint at New York Daily News as a City Hall reporter, which gave her a taste of the kind of work she would be doing later.

Gay entered the field of journalism with ample preparation by securing a bachelor of arts degree in political science from the University of Michigan. Gay was a student there from 2004 to 2008, and excelled as a runner throughout her undergrad years. It’s an activity she continued to indulge in after her graduation as well.

Gay has run two New York-based half-marathons (Lake Placid and Hamptons) and raised over $3,000 to support the Leukemia and Lymphoma Society through the Team in Training initiative.

Gay Has a Fondness for Food

Gay grew up in Westchester County and Brooklyn, and currently lives in Brooklyn today. Whenever Gay gets time off from her hectic work schedule, she spends it happily indulging in her favorite activities like running, trying out new kinds of cuisine, and regularly using the city’s bike share program.

Her Parents Have an Interracial Marriage

People who have met Gay marvel at the passion she has for her work and bringing important issues to the attention of concerned stakeholders. She gets it from her parents, who are two of the biggest influences in her life. Mara Gay’s parents are in an interracial marriage and have faced much discrimination and problems all their life due to it.

Gay has written about her parents’ unique love story, which began when they met in Detroit, one of the most segregated cities in the U.S. at that time.

mara and me on fire island

Gay’s mother Patricia is white and her father is black, but the couple fell in love and decided to marry each other despite fierce opposition from both their families and society. Today, of course, their marriage is legal in all 50 states, but their choice to love one another through such difficult times is a personal triumph for them and Gay herself.

Gay Is an Inspiration for Young People

Gay is a role model for young people of mixed race and all backgrounds in America, and has proved that a unique perspective on the world as well as ability, intelligence, and hard work can get you the career and life you’ve dreamed of.

Her personal courage is especially inspiring to young victims of sexual assault. Gay bravely shared her story as a rape survivor following Dr. Christine Blasey Ford’s testimony before the Senate Judiciary Committee in September. Gay has achieved her objectives by committing herself to sharing the hard-hitting stories that matter most to readers, whether political or social. Mara Gay has gained that most important of things, respect!