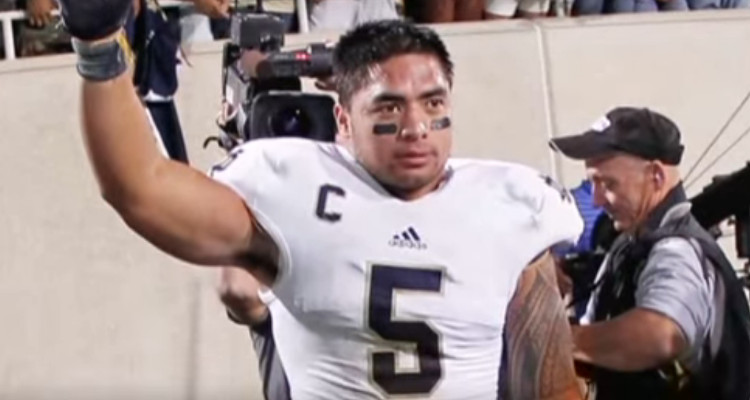 Inside linebacker, Manti Te’o reportedly signed a contract with the New Orleans Saints, after four years with the Los Angeles Chargers. But the news has brought up a funny and unfortunate situation for the player that began in 2013. Manti Te’o memes from four years ago are resurfacing, and it all began when a terrible hoax was played on the footballer. If you want to learn more about Manti Te’o’s fake girlfriend hoax and see some funny Tuesday memes, keep on reading!

According to reports from multiple media outlets, Manti Te’o was in an online dating relationship with a woman named Lennay Kekua. He announced to the world that both his grandmother and girlfriend died on September 11, 2012, and when the news spread of the tragedies, he was given widespread recognition for his strong football season, despite his loss. However, in January 2013, after receiving an anonymous email tip, Deadspin investigated the identity of Kekua. On January 16 that year, they released details that revealed Kekua was a girlfriend hoax, created by a man named Ronaiah Tuiasosopo. The photos of Kekua were actually photographs of a woman named Diane O’Meara, one of Tuiasosopo’s former high school classmates. In an interview with Dr. Phil, Tuiasosopo confessed to the hoax, admitted he fell in love with Te’o, and was using the fake identity as an escape from the reality of his situation.

Talk about a complicated and sad story! Thankfully the entire situation is far behind Te’o and he is moving forward in his career as a football player. After the event, people began creating memes, joking about the Catfish-like situation. Here are some of the best ones!

Slightly morbid: an unknown gravesite for Te’o’s girlfriend. Will he ever live these jokes down?

Show of hands to anyone who has heard the term “online dating” and thought about Kip from Napoleon Dynamite?

#wcw #wce me and bae the other day 😂😂😂 #teoing pic.twitter.com/bWKa9gCZgJ

There are actually people who think of things like this. And then there are people who make it viral.

Also Read: Ready for this Jelly? Justin Trudeau’s Butt is Breaking the Internet: You Have to Check Out these Memes!

Even if I had an imaginary girlfriend she wouldn't be this hot. Guess things worked out for Manti Te'o. #MantiTeo #NotreDame pic.twitter.com/zfPAfXX4NK

Not only is Te’o bursting forth in his football career, he also has a new girlfriend, and yes, this time she’s real! It looks like he is getting another shot at love, and this time, the love could be more real than he’s ever imagined. All the best to the happy couple!

Now, Manti Te’o has reportedly signed a two-year contract with the Saints. At only 26 years of age, Te’o has already shown solid work ethic that his coaches admire. Former Chargers coach Mike McCoy said of Te’o, “He lives and dies football every single day.” With his exciting new opportunity, and his real, beautiful girlfriend by his side, the sky’s the limit!