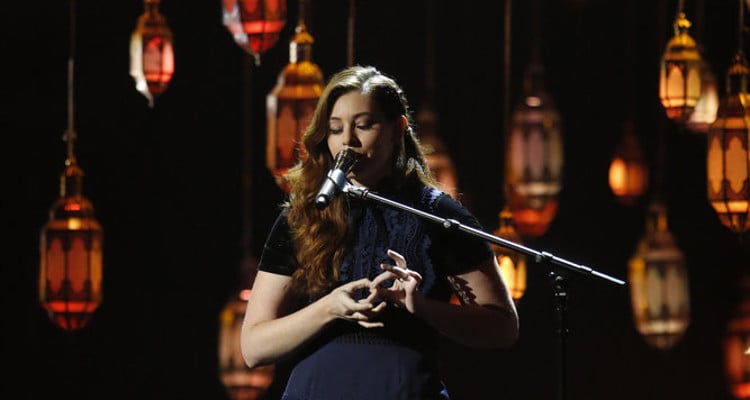 Mandy Harvey gave another spectacular performance in the America’s Got Talent 2017 Semifinals, and could very well make it to the top 10. Her song “Release Me” was a pleading yet soaring cry for escape from a complicated relationship. Not a single person was left unmoved by the time Harvey finished her song.

To say that Mandy Harvey wowed the judges and audience during her America’s Got Talent performance, on Tuesday, September 12, is an understatement. She actually blew them away with a practically flawless original song, “Release Me.” Radio City Music Hall, fell silent when Harvey walked on stage and the first notes were heard. Mandy Harvey’s song gave her ample opportunity to show her vocal talent, and give another amazing performance that clearly makes her one of the front-runners to win AGT 2017.

Mandy Harvey’s AGT performances are outstanding for both her immense talent, and the hardship she faced to get to where she is today. Harvey cannot hear the music, but feels the vibrations with her feet on stage. She has been singing from the age of four, but tragedy struck her when she was 18, and lost her hearing due to a connective tissue disorder while studying music at Colorado State University. However, Harvey did not give up on her passion and after several years of pushing herself, she was able to sing again. And what a singer she is!

The Desire to Break Free

Excited for @agt tonight! Judge cuts are tonight and next week…then soon LIVE shows! Can't wait to go back! I'll be doing Facebook Live tonight at 7pm EST….bring your Ukuleles!

Both the judges and audience were on their feet clapping, some using the ASL gesture for clapping,  after Harvey performed her original song. The “Release Me” lyrics were evocative and gave an honest look at a painful relationship where one person wants out. The sadness of and the desire to break free from was clear, and Harvey sang it with her heart. All four judges praised her and said that the song was powerful and they felt moved. They told her that though she cannot hear the music, she could feel it, and this strong connection between her and the music was more important than just hearing it.

An Inspiration to Others

I get to hang out with my buddy @iamheathert today! I'm so excited for an adventure! Starting with finding jeans….Lord give me strength!

Harvey communicated through sign language as she sang and when Tyra Banks mentioned it, the singer joked that this was the first sign performance on AGT. With her terrific semifinals performance, she has a great chance of making it to the top 10. The judges were impressed, and so was the audience, so she might actually make it. It couldn’t happen to a more deserving and brave soul than Harvey. After suffering such a big setback, not losing hope, coming back with a bang, and inspiring others to overcome their difficulties, she is nothing short of a courageous person. Harvey’s fans are hoping that she will make it to the AGT Finals and win the competition.

Check out Mandy Harvey’s original song “Release Me” below:

America’s Got Talent airs Tuesdays and Wednesdays at 8:00 p.m. EST on NBC.