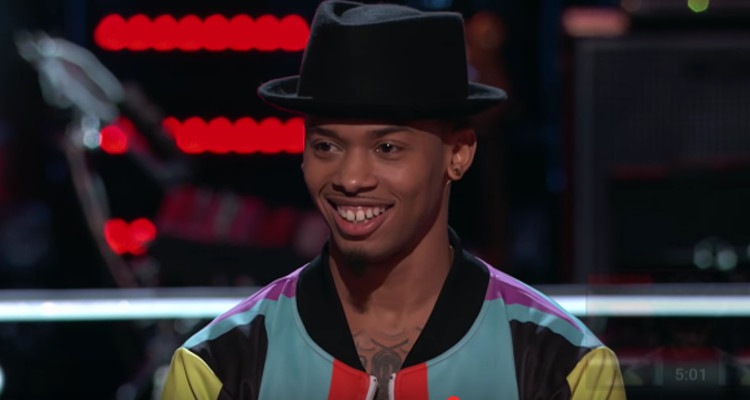 Malik Davage started his stint on The Voice in a very heart-rending manner. The Team Adam artist moved the judges and everyone else to tears with his emotional performance and story.

When Malik Davage made it into The Voice 2017, he broke down with joy. The singer cried on Gwen Stefani’s shoulder after being chosen to Adam Levine’s team. Though he was exceptional at his Blind Audition, his Battle Round performance with Kawan DeBose was rocky. However, he made it through and is prepared for the Knockout Rounds. Find out more about this artist with the heart-warming story in Malik Davage’s wiki.

His Loved Ones Pushed to Music

The young Malik Davage grew up in a rough neighborhood in Washington, DC. His circumstances were tough, but he didn’t let them hold him back. According to his bio on the NBC web site, his brother, classmates, and teachers encouraged him to pursue singing. As a child, his music influences included Luther Vandross, Stevie Wonder, Micheal Jackson, and many others.

We don’t know much about his early life, other than the fact that his hardworking mother raised him, his brother, and sisters alone. He had an exceptional singing talent from a very young age. Davage was named All-City Honors Chorus in middle school —a Yale Music in Schools Initiative, where students audition to for tuition-free performances in various bands, orchestras or ensembles.

Also Read: Brennley Brown Wiki: Everything You Need to Know about “The Voice” Contestant

My favorite little Lady ? and her Aunties ❤️ #TeamDavage

He Released His Debut Single

It’s not surprising that Malik Davage would pursue a career in music. He has a YouTube channel where you can see his immense talent. He posts impressive music videos and performance videos of both original songs and covers of other artists.

A year ago, he dropped his debut single, “Love You Now” and followed it with, “All Night Long.” Both of Davage’s original songs, along with his The Voice songs, are available on iTunes.

He has been featured on BET’s 106 & Park —a music video countdown show that covered hip-hop, contemporary R&B, reggae, and dancehall music videos. He performed on the show and won their Wild Out Wednesdays segment in 2013. The local hero also sang the national anthem for the Washington Wizards basketball team.

Also Read: Ashley Levin Wiki: Everything You Need to Know about “The Voice” Contestant

He Annoyed a Legend

Quite literally, Davage annoyed a Legend —John Legend, that is! His Battle Rounds partner, Kawan Debose was compared to Prince by Adam Levine. But one meeting and a grammar lesson from John Legend had this prince turning into a pauper! Even someone as mellow as John Legend got mad!

John Legend was invited by Coach Adam to mentor his team during the Battle Rounds. Davage and DeBose were practicing Legend’s “Love Me Now.” They nailed their performance in the Battles ring, but it was still less than the audience and coaches expected from this dynamic duo. That could be because it was obvious they didn’t gel during rehearsals.

The boys had a major oops moment when they messed up the lyrics of the song in front of the Legend himself. “When you change a pronoun, it changes the meaning of the song. It’s ‘who’s gonna kiss you when I’m gone?’ You want to get those pronouns right,” John grumbled. Kawan had accidentally sung, “who’s gonna kiss me” on the second day of rehearsal, leaving Legend and Levine disgruntled at their lack of progress. The two contestants weren’t working together, and Davage was more concerned with his solo parts.

At the age of 23, Malik Davage auditioned for The Voice season 12. We all saw Davage burst into tears when Adam Levine turned his chair for him. Only one coach turned around, but that was all he needed! We later understood that the reason behind his emotional Blind Audition was his daughter and mother who joined him on stage after his performance.

The singer has a two-year-old daughter named Paris, and you’d be lying if you said your heart didn’t melt when she ran up on stage! Davage said he understood his mother’s struggles raising him and his brother alone when he became a father. We don’t know about little Paris’ mother or whether she is in the picture at this time.

The soulful singer’s Blind Audition was the first time Paris Davage saw her dad perform. “I’m pushing hard… for her,” he said referring to his beloved daughter. One thing’s for sure; he wants to give his daughter the world!

The Voice airs Mondays and Tuesdays at 8:00 p.m. EST on NBC.

This is how you hug @adamlevine. #VoiceBlinds pic.twitter.com/2eh7WJQU0a