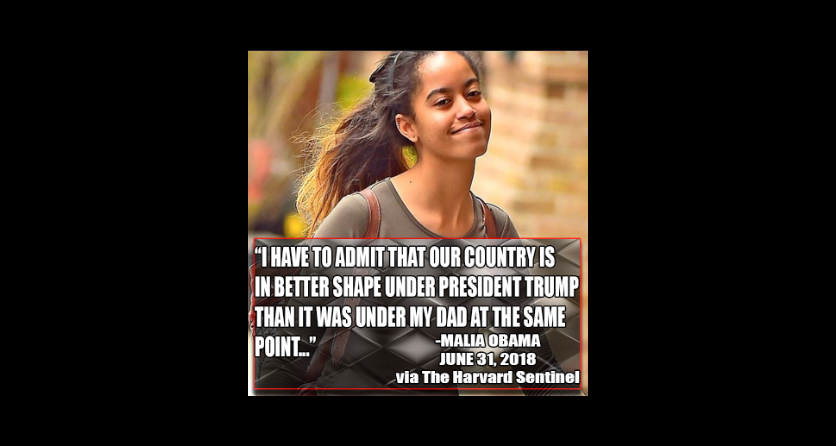 Malia Obama told the Harvard Sentinel the country is in better shape under Trump than it was under her father, Barack Obama.

Former First Daughter, Malia Obama supposedly made a comment that has many questioning it’s validity. Barack Obama’s 20-year-old daughter allegedly said that the country is doing better under Trump’s presidency than it was during Obama’s tenure! Shocking, right? The debate on whose presidency is more successful aside, is it really a statement Malia made? Not quite. We set the record straight here.

Barack Obama’s eldest daughter, Malia Obama has come under scrutiny for a lot of things, even as she follows the life of a private citizen attending college.

From attending Harvard to being seen with her alleged boyfriend Rory Farquharson, everything about her become a subject of discussion. It even prompted other First Daughters like Ivanka Trump and Chelsea Clinton to demand the media back off from Malia’s privacy.

With everything she does coming under a microscope, even a seemingly ordinary quote from Malia Obama can cause an uproar. Right now, a supposed quote from Malia has the Internet questioning if it’s real.

A post by a Facebook page called “America’s Last Line of Defense” cites a statement Malia allegedly said to a publication called the Harvard Sentinel in June. The quote reads, “I have to admit that our country is in better shape under President Trump than it was under my dad at the same point…”

Whether or not President Trump is doing a better job than Obama is a whole other debate that we won’t discuss here. And what Malia sincerely believes about her father’s presidency or Trump’s presidency, is up to her.

However, it is completely false that Malia publicly said Trump is better than her own father!

For starters, the post is from America’s Last Line of Defense, a notoriously satirical site. It posts a disclaimer that clearly states nothing it posts is real. Its posts are meant to be entertaining and trick Trump supporters into sharing them.

Secondly, there’s no such publication as the Harvard Sentinel. And the alleged quote is dated June 31, 2018. Unless someone changed the calendar, June has only 30 days!

So, before Internet trolls go after Malia Obama again, know that she never said this statement.