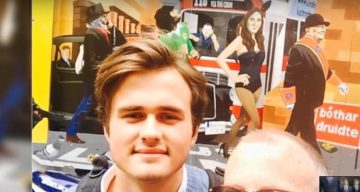 After Malia Obama was spotted kissing a young man at a Harvard-Yale football game on November 18, 2017, everybody was curious to know the boy’s identity. He is Rory Farquharson, a student from England who studied at the elite and prestigious public Rugby School. He is currently a sophomore at Harvard and is an academically gifted student.

On Saturday, November 18, 2017, at a Harvard-Yale football game in New Haven, Malia Obama was photographed passionately kissing Rory Farquharson. Since then, the media has been abuzz with the news and people are asking about the lucky young man. Well, it looks like he is Malia Obama’s boyfriend and quite an interesting young man from England with a very impressive resumé. Here are a few details from Rory Farquharson’s wiki.

Rory Farquharson’s age is 19, and he is the son of Catherine and Charles Farquharson, both British citizens. His mother is an accountant and lay person on legal and financial matters in London’s Upper Tribunal. His father has a law degree from St. Catharine’s College, Cambridge, and is the chief executive of Insight Investment Management Limited based in London, England. Farquharson’s family lives in a six bedroom detached $2.13 million home in Woodbridge, Suffolk.

A Super Achiever at School

Farquharson was an excellent student and head boy during his final year at Rugby School, one of England’s most prestigious schools, where the game of rugby began. Head boys are usually selected by the principal, and provide a link between teachers and students. They are usually the most academically and socially outstanding student of the year. Rugby School is considered to be one of the top public schools in the United Kingdom, rated just below the more famous Eton and Harrow.

Heading Off to Harvard

Farquharson was a great rugby and golf player, who also maintained good grades. He was a member of his school’s chemistry club, the Blue Bunsen Society. He decided to enroll at Harvard where he is now a sophomore. When he started last fall, Farquharson posted a picture of himself at the Cambridge, Massachusetts school with the caption, “So it begins.” He spent the summer as an intern with the Center for Democracy and Peace Building in Northern Ireland. However, according to his Twitter account, he is more interested in following in the footsteps of his father in banking.

Getting a Lucky Break

He also seems to like his privacy, as Rory Farquharson’s Instagram account is nowhere to be found. While any guy close to Malia Obama might find her status as the daughter of a former U.S. president a bit intimidating, Farquharson does not seem to mind. After all, with a background like his, some fathers might be happy for their daughters to bring a guy like him home!