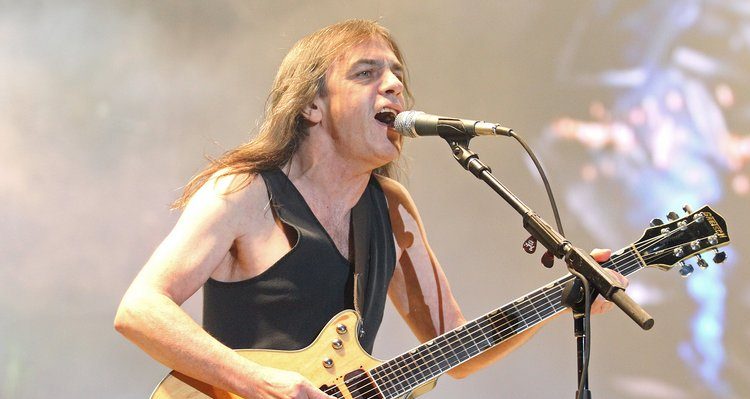 Malcolm Young founded the mega-successful heavy metal band AC/DC and was the chief architect of their loud, brash, and catchy music. He navigated the band with a firm hand right through the past four decades and gave them many of the hit songs and albums they are known for. Young stopped playing with the band in 2014 due to dementia but wanted them to carry on. He passed away peacefully at his home on November 18, 2017, leaving behind grieving family members and a musical legacy that can never be forgotten. Read all about his life and career in Malcolm Young’s wiki.

AC/DC legendary guitarist and rock music icon Malcolm Young is no more. Young passed away peacefully on Saturday, November 18, 2017, at his home surrounded by his family.

Malcolm Young’s cause of death was dementia, a condition he was afflicted with for the last three years.

The Sydney Morning Herald reported on September 26, 2014, that Young was suffering from dementia and had been admitted to a nursing home to receive full-time care.

Although it was known that Young was ill, the news of his death has come as a shock to generations of music lovers who grew up listening to the iconic heavy metal band’s music.

Born on January 6, 1953, in Glasgow, Scotland, to his parents Margaret and William Young, Malcolm Young’s age was 64 when he died. He was one of eight children born to the couple, and along with some of his siblings and his parents, he settled in Australia, making it his home.

Young was 20 years old when he founded his band AC/DC in November 1973 and asked his 18-year-old brother, Angus Young, to join the band. They started releasing albums like High Voltage, T.N.T., Let There Be Rock, and Highway to Hell, and soon developed a fanatical following.

In 1980, AC/DC survived the loss of their talented lead singer, Bon Scott, and recruited Brian Johnson in his place. Their next release, Back in Black, was a monster seller all over the world and is still considered as one of the best heavy metal albums of all time.

AC/DC then began releasing hit albums like Flick of the Switch, Fly on the Wall, Blow Up Your Video, The Razor’s Edge, Ballbreaker, Black Ice, and Rock or Bust, which all sold millions of copies and spawned hit singles. Their music was loud, witty, uncompromising, and fun all at the same time. And, several of their songs became anthems for fans of heavy metal.

Malcolm Young was the driving force behind the band’s huge success, and he was considered one of the best rhythm guitarists in the world. He was considered the driving force and leader of the band, even though he chose to give the limelight to his younger brother. Young co-wrote songs with his brother and was responsible for the band’s sound, developing many of their popular riffs.

And the Band Played On

Young took a break from touring and playing with the band in April 2014, so that he could receive treatment for dementia. However, the band announced that Young would retire permanently in September 2014.

Thanks to the band’s super successful albums and singles, mammoth tours, and video sales, Malcolm Young’s net worth was a massive $100.0 million at the time of his death.

Although Young knew that he couldn’t play with the band anymore, he wanted the band to continue making music. He encouraged them to find a replacement and carry on, which the band did due to the immense respect they had for him.

Death of a Visionary Musician

The rock music legend is survived by his wife and two children. Malcolm Young’s wife, Linda Young, and his kids, Cara and Ross Young, were present by his side when he passed away.

The band paid their respects to their founding member and said on their website, “With enormous dedication and commitment he was the driving force behind the band. As a guitarist, songwriter, and visionary, he was a perfectionist and a unique man. He always stuck to his guns and did and said exactly what he wanted.”

Young wanted to create music that was inspiring and fun for everyone, and people of all ages loved the band’s music. And with his death, the curtain falls on an era where bands were revered for only their music and talent. Young shone brightly as a star for a long time and gave listeners songs they could rock to for the rest of their lives.

Rest in peace, Malcolm Young. And thanks for all the great music!