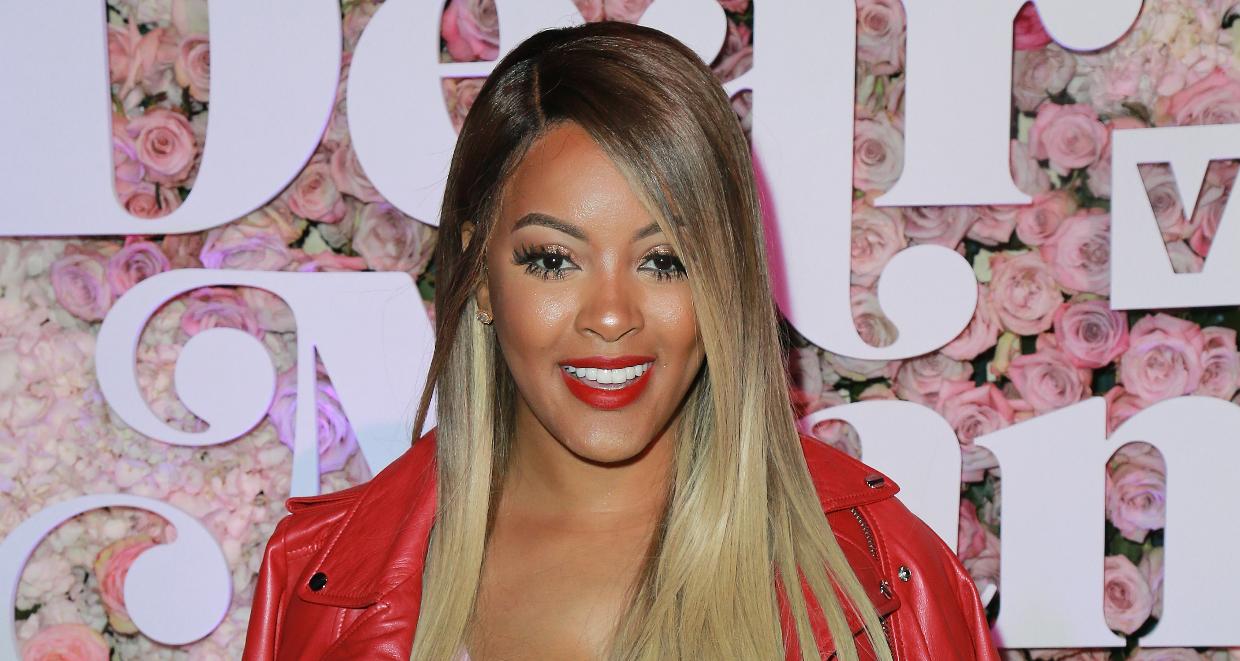 Malaysia Pargo from Basketball Wives LA used to be married to NBA player-turned-coach Jannero Pargo and is now a single working mother of her three children. She is an entrepreneur and a jewelry designer, who owns her own jewelry lines and has launched her own bedding line, as well. With an estimated net worth of $3.5 million and an independent spirit, Pargo is handling her responsibilities with great confidence.

Ever since Malaysia Pargo joined the cast of Basketball Wives, the hit TV show has gotten a whole lot spicier! She’s been dubbed the token “mean girl” of the season, but the drama she brings might just be the reason producers brought her back for its sixth season!

Pargo was one of the original cast members of the show’s spinoff, Basketball Wives LA. She had developed quite a fan following before the show was pulled off the air after it’s the fifth season. However, with her return, fans have seen her spicy new attitude!

Pargo is an entrepreneur and a reality TV personality who was once married to former NBA player, Jannero Pargo. He is an American professional basketball coach and a former NBA player, who is currently an assistant coach for the Windy City Bulls of the NBA’s G League. The couple filed for divorce in 2014.

According to reports, there is a new man in Malaysia Pargo’s life. His name is B Moe, and he is a singer known for songs like “Catch Us in Traffic,” “Savage Shyt,” and “Post’s” to name a few.

Here are a few more details from Malaysia Pargo’s wiki.

She had a younger brother named Dontae Hayes, but he was shot by the police on New Year’s Eve in December 2013, and later died of his injuries. Malaysia Pargo’s brother was reportedly just 20 years old at the time.

Pargo is a proud African-American woman, but she’s very reluctant to talk about her past and upbringing. She became known to people after she married basketball player Jannero Pargo in 2006.

They met each other at a party in Los Angeles, California when Pargo was just 22 years old. There was huge chemistry between the two, and they eventually got married.

Her union with Jannero Pargo produced three children, including twins. They are currently being taken care of by Malaysia Pargo, and she receives child support payments from her ex-husband as per the terms of their divorce. 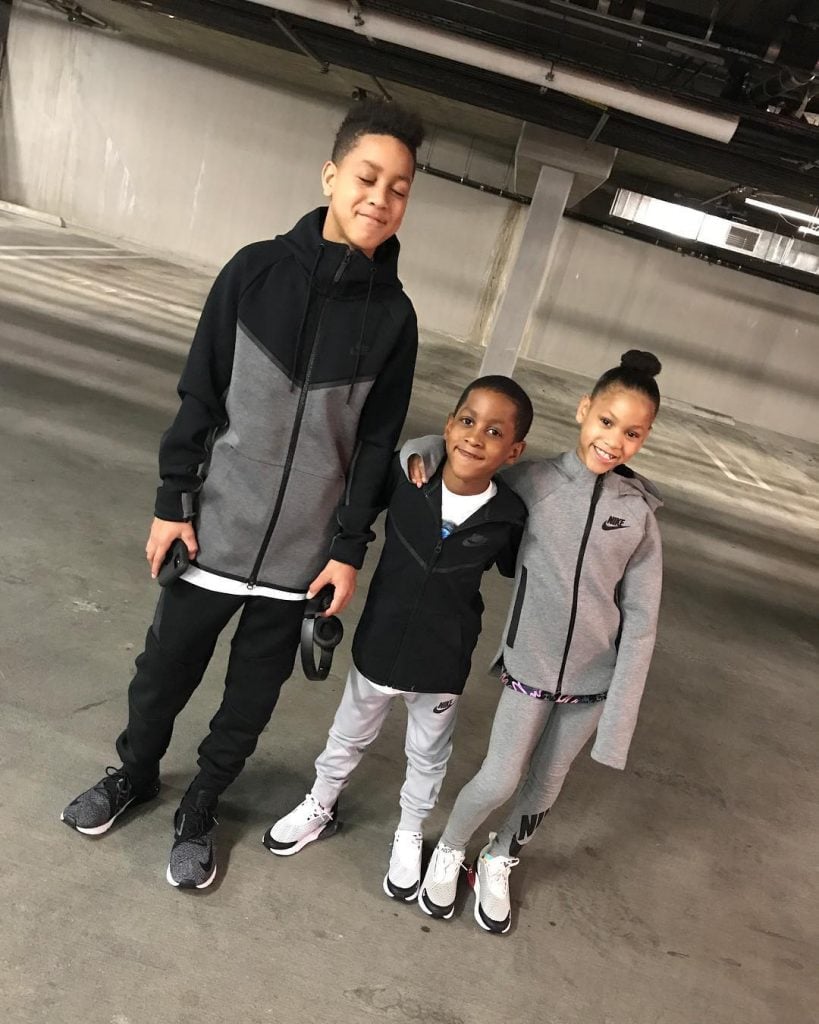 Pargo filed for divorce in 2014 after a 17-month separation between her and her husband.

The terms of the divorce settlement were very favorable for Pargo, as she got almost half of her ex-husband’s fortune. 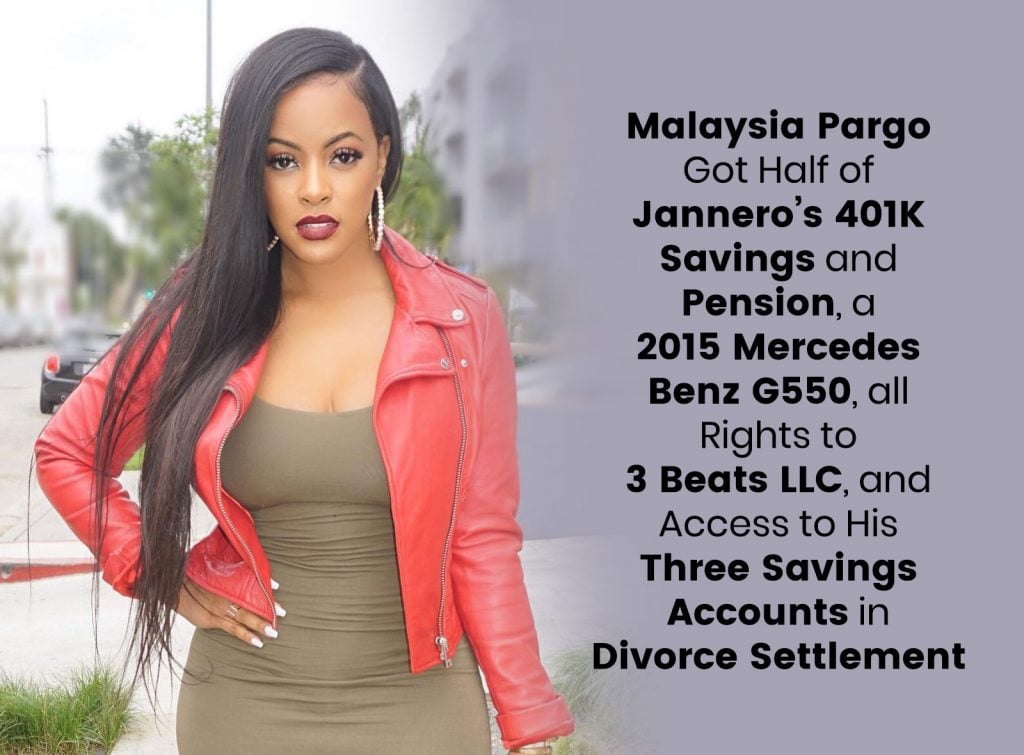 Malaysia Pargo got half of Jannero’s 401K savings, half of his pension, a 2015 Mercedes Benz G550, all rights to 3 Beats LLC, and access to his three saving accounts.

On top of that, Malaysia Pargo’s ex-husband was told by the court to pay $14,580 in child support for his three kids, and $800 for childcare every month. 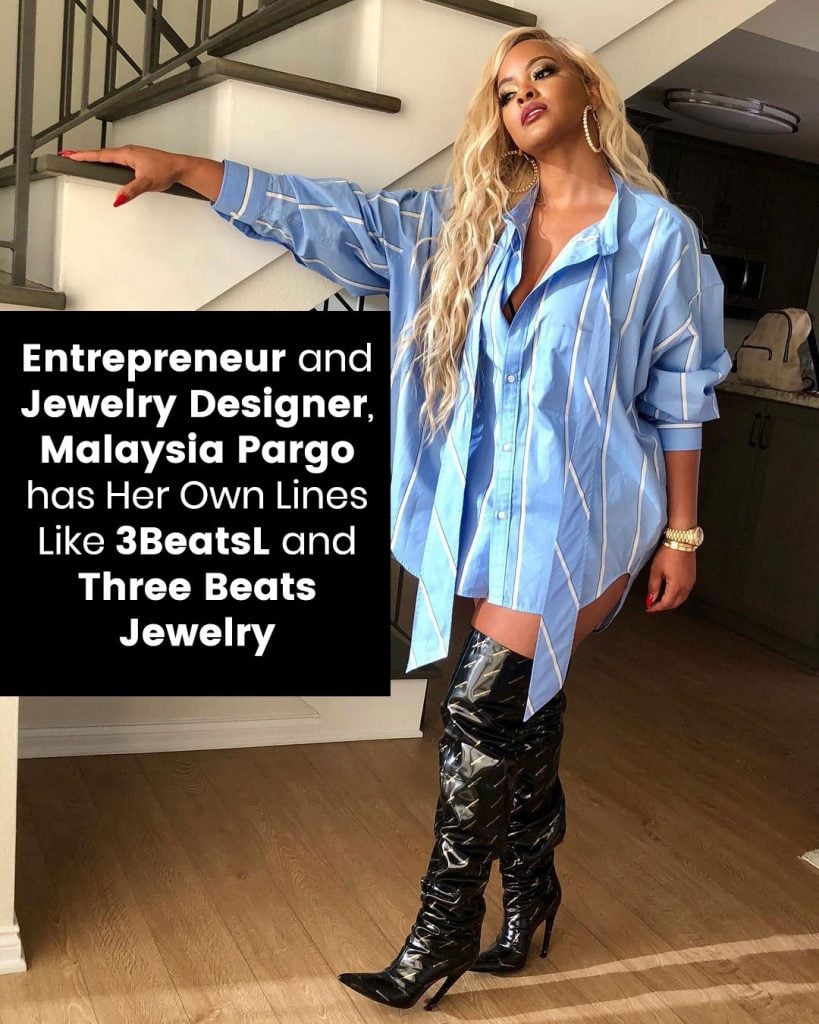 It’s not that Pargo is financially helpless without the divorce settlement. She is an entrepreneur and jewelry designer who has her own lines like 3BeatsL and Three Beats Jewelry. She also ventured into the linen department and launched her own line of bedding. Needless to say, she makes a healthy amount of money to be able to take care of herself and her three children.

In 2014, Pargo’s collection was made available at select hotels like Jason’s of Beverly Hills, The Ritz Carlton, and The Cosmopolitan.

Since then, she has seen success in her bedding business. She partnered up with an upholstery and furniture company named Hedgecock Creed and developed the Malaysia Pargo Bedding Collection. Her objective is to provide affordable luxury bedding to people everywhere.

The line offers a rich range of comfortable textures like faux furs and velvet. Pargo has even introduced a chic and affordable comforter based on her personal style, embellished with crystals and gold.

When asked about her motivation for launching her bedding collection line, Pargo said, “There was a void in the marketplace for affordable luxe glam bedding, so I decided to fill it by creating a line that was true to my sense of fashion. I believe everyone deserves to feel glamorous even while they sleep.”

A Growing Net Worth 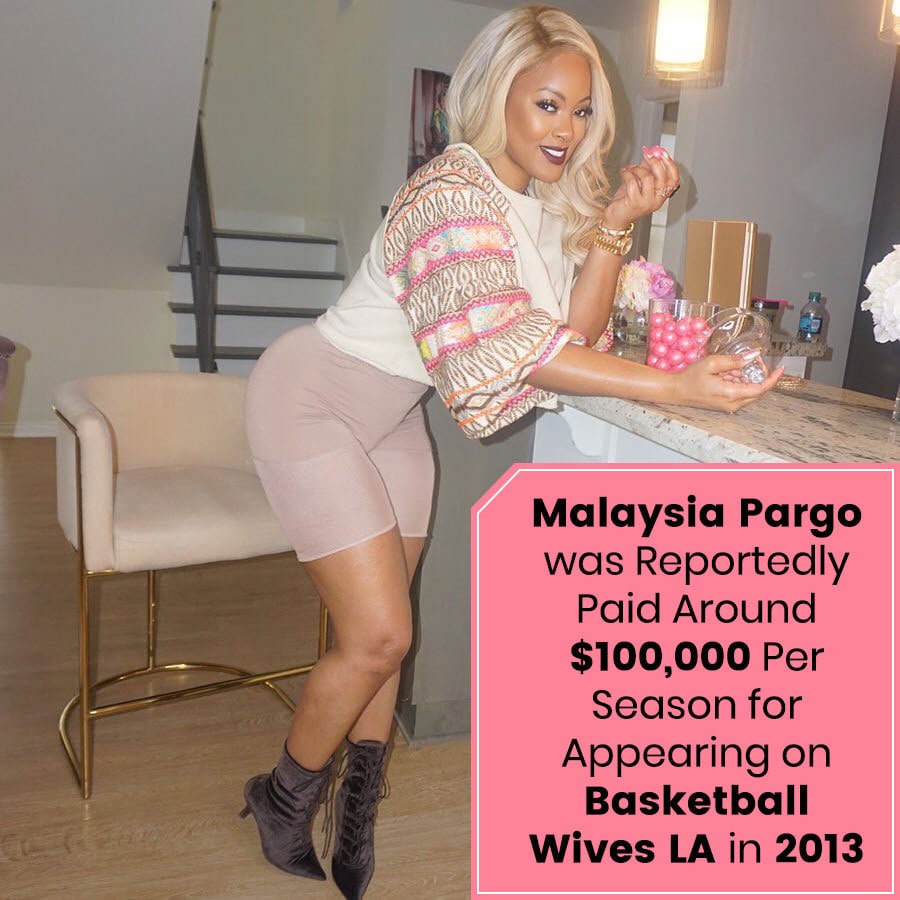 According to reports, Pargo was being paid around $100,000 per season for appearing on Basketball Wives LA in 2013. Now, she is also being highly paid for her appearances on the new seasons of Basketball Wives.

It’s no surprise that Malaysia Pargo’s net worth in 2018 is estimated to be $3.5 million and growing. She is an ambitious and creative person. And with the responsibility of caring for her three young children, she is undoubtedly striving for greater financial security.

Pargo has appeared on other TV shows over the years as well, like Datzhott, The Arsenio Hall Show, Home & Family, and The Eric Andre Show. She has also appeared in the music video for the song “Nothing” by Mase.

Those who want to see some sexy pics of Pargo should head over to her Instagram account. She’s stunning in so many ways, and has countless pictures to prove it! 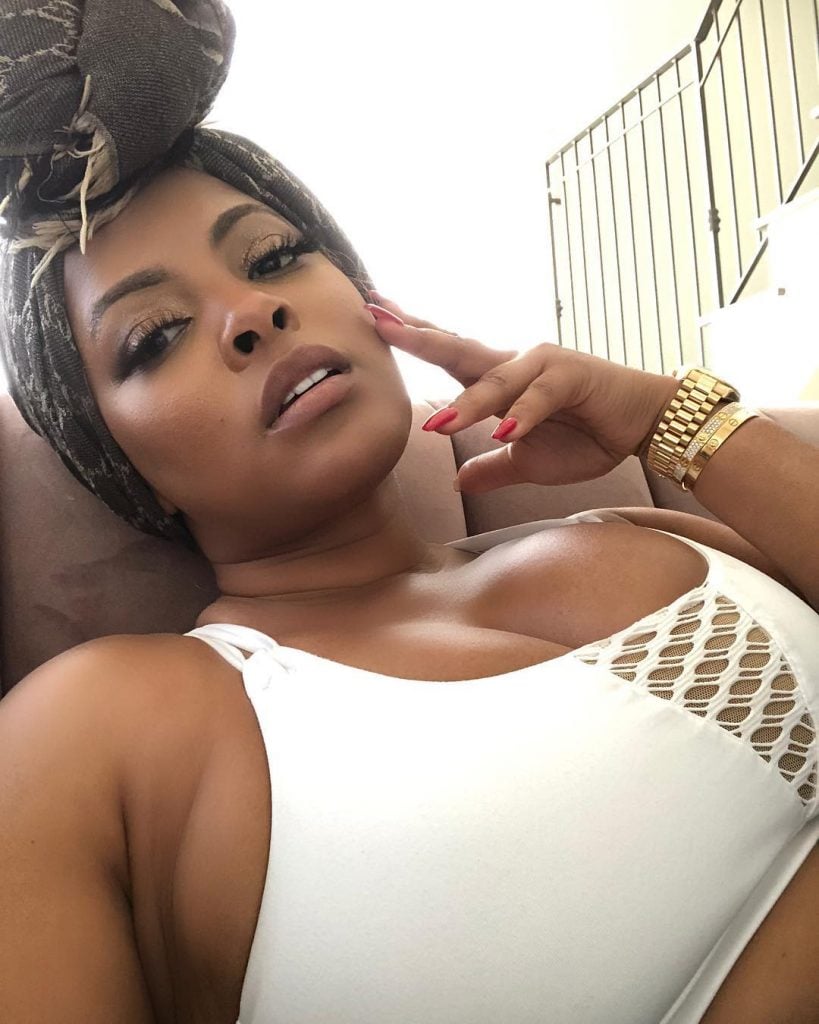 Malaysia Pargo’s Instagram account gives fans an inside look at the luxurious life this beauty lives. Whether in stylish dresses, glammed up, or dressed down, blonde or brunette, Pargo is proving confidence is key!

She can be seen hanging out with her friends and family members and shopping. There are also pics of her house and delicious food on her account, as well as several inspirational sayings and quotes that motivate her. 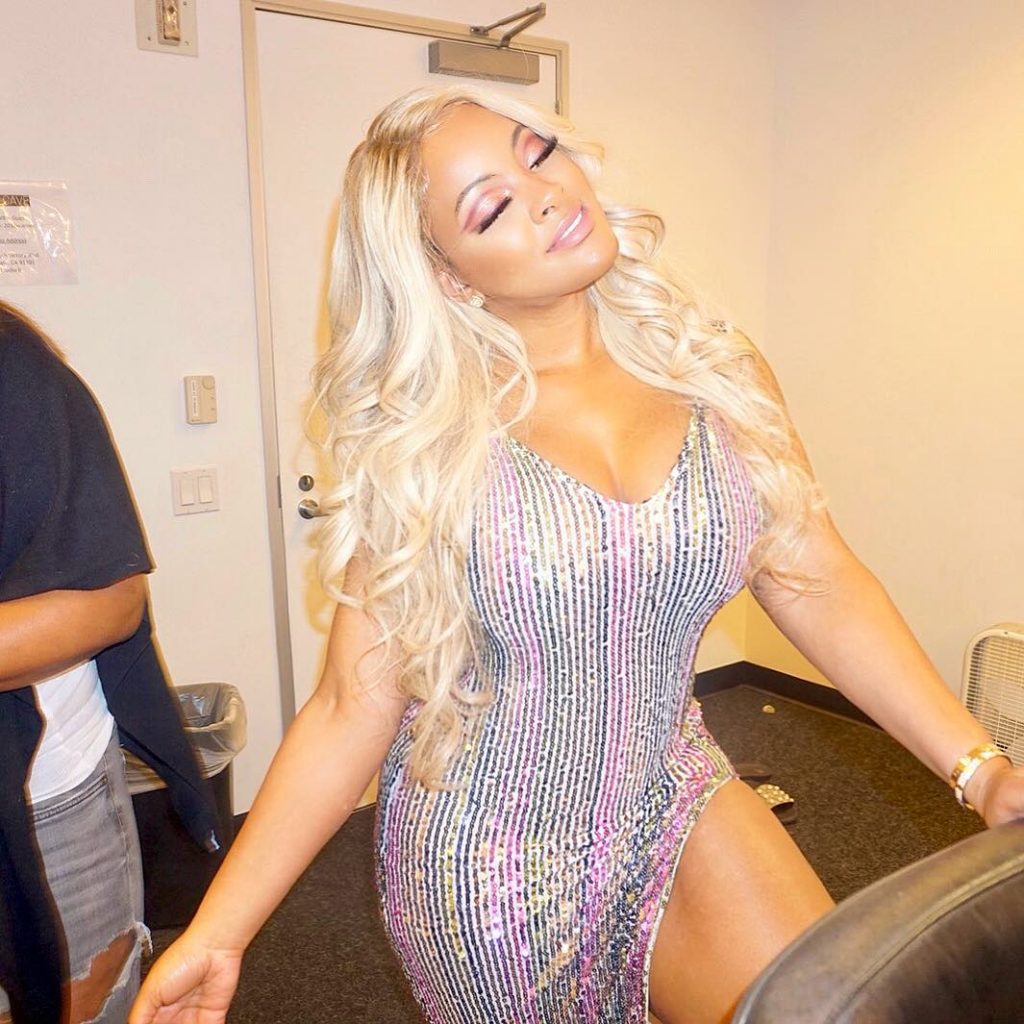 Right now, Pargo has her hands full with several responsibilities like raising her children, running her businesses, and appearing on Basketball Wives. She is hard-pressed for time, but is doing an admirable job on all fronts!

Power to Malaysia Pargo and other independent and creative women like her! You can catch her weekly, in all her glorious drama on VH1’s Basketball Wives.

Also Read: Jackie Christie Wiki: Everything You Need to Know about the “Basketball Wives” Cast Member