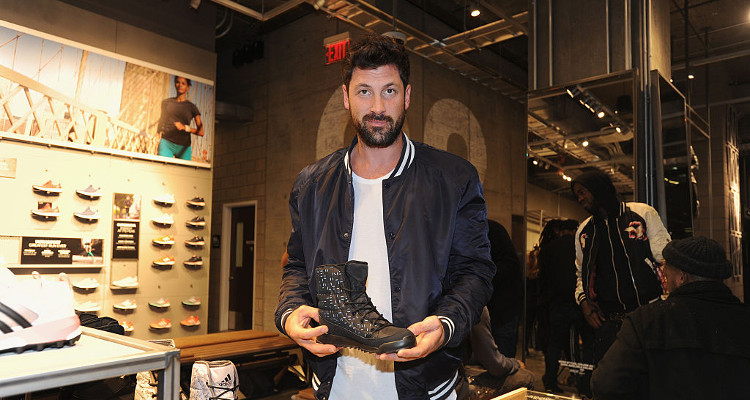 Dancing with the Stars is pitting boy bands vs. girl groups. So, how can we miss the DWTS poster boy, Maksim Chmerkovskiy? The pro dancer was sidelined by an injury, but it looks like he’s getting ready for a comeback!

Maksim and his brother, Valentin are from Ukraine. They began dancing at a young age when their parents enrolled them in aesthetic education that included ballroom dancing. He soon began competitive dancing and didn’t even let a ski injury sideline his dance career. When the family moved to New York, he began competitive dancing. By the time he was 16, he and his father opened a dance studio.

He became a household name after being chosen as one of the pros on Dancing with the Stars in season 2. Season 24 is his sixteenth season on the reality dance show. So far, he won one Mirrorball Trophy in season 18 with Olympic figure skater, Meryl Davis.

The 37-year-old made a breakthrough in theater with productions like Burn the Floor, Sway: A Dance Trilogy, and Maks and Val on Tour. The poster-boy of DWTS has earned a net worth of $3.0 million in his career.

He’s engaged to fellow DWTS pro, Peta Murgatroyd and the couple welcomed their son, Shai in January this year. Chmerkovskiy’s soon-to-be wife was back in the ballroom after giving birth to their baby and is competing with Bachelor star, Nick Viall. Both Peta and Valentin have won two Mirrorballs and Maks is banking on Glee alum, Heather Morris’ background as Beyoncé’s backup dancer to even the score.

Also Read: Alfonso Ribeiro on “DWTS:” Here are the Facts You Need to Know

Maksim Chmerkovskiy and Heather Morris were seen as the team to beat on DWTS season 24, after making a splash on premiere night. However, come Week 2, Maks suffered a painful calf injury during rehearsals in what Murgatroyd describes as a “freak accident.” Val assured fans his brother was doing well saying, “He’s good, he’s the better bro. He’s going to be alright.”

DWTS troupe member, Alan Bersten replaced Maks as Morris’ partner while he recovered. He underwent calf surgery and was going through therapy to recover faster. During this time, he kept fans posted about his health on Instagram. He also continued to be involved in Morris’ dance journey by calling for support on social media and attending Morris’ and Bersten’s rehearsals and performances.

In true Maksim fashion, he even posted on Instagram before his surgery with his son, Shai, and fiancé, Peta wishing him luck. And he even gave a goofy update from the hospital asking fans to support Heather and Alan.

Thank you all for so much love and support! And for having @heatherrelizabethh back with all your votes ?? I'm also very excited about her and @alanbersten Tango next week ? Please rest assured that I'm taking this thing very seriously and, although I don't have a concrete return date, I'll give it my all! In the mean time here's me, making bad social media choices ?

Week 5 of DWTS saw Heather and Alan perform a Frozen jazz for Disney night, and Chmerkovskiy revealed that he’ll be back. “Alan’s officially fired!” the pro said, “I’m taking over as of tonight.”

And what better week to make a comeback than the Boy Bands vs. Girl Groups week! Tonight’s episode teased the male celebs (a.k.a. the ballroom boy band) going shirtless. Of course, there’s nobody better at the art of going shirtless than Maksim Chmerkovskiy. The man also teased the upcoming episode with a shirtless picture, striking a typical ‘90s pose with Heather.

Maks wants to take this week easy before getting serious next week saying, “This week I just don’t want to do something stupid and regret it. “I want to do the right thing. If this is the result of one week, then I’m sure I’ll be more than ready.” As long as he’s taking off that shirt, we’re game!