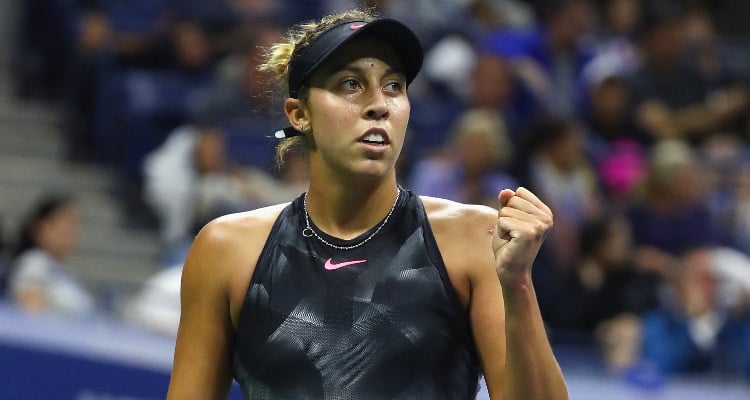 Madison Keys defeated her friend and fellow American tennis player, Coco Vandeweghe to advance to the 2017 U.S. Open finals. It’s the young player’s first Grand Slam final which brings a lot of attention to her life off the court as well. Does Madison Keys’ 2017 performance have to do with a boyfriend?

A young tennis player by the name of Madison Keys has been charging through the 2017 U.S. Open despite all odds. After beating Coco Vandeweghe in an All-American semifinal, she’s heading for an All-American final against Sloane Stephens. When an athlete does as well as Keys, their personal life tends to get attention too. Tennis lovers are curious to know who Madison Keys is dating at the moment. Find out about Madison Keys’ dating life here.

Tennis: Her One and Only Love

Madison Keys started her WTF career in 2009 but it wasn’t until 2011 that she earned her spot in the U.S. Open. She reached the quarterfinals at a WTA event for the first time in 2013 at the Apia International Sydney. 2013 was also the year she claimed her first top 10 spot at the Mutua Madrid Open. At only 14 years and 48 days, she won a WTA match at the 2009 MPS Group Championships, becoming one of the youngest players to do so.

She won three WTA tournaments in her career and is poised to be one the best American tennis players. She was the first American to debut in the top 10 since 1999. The last player to pull it off was Serena Williams. As of September 2017, she is ranked No.16, the third highest American player behind Serena and Venus Williams. Not bad for someone who started playing tennis because she loved Venus Williams’ white tennis outfit!

Her career was also marred with injuries, which she played through. She underwent surgeries and intensive recovery to keep up her performance on the court. During the quarterfinals against Coco Vandeweghe, the 22-year-old powered through and dominated Vandeweghe. It looked like she might lose her lead when she took a medical timeout. She came out with a wrap around her right leg and continued her momentum to earn her spot in the US. .Open 2017 finals.

No Time for Love

While Keys keeps most of her personal life private, it doesn’t stop fans from speculating about her relationships. Currently, Keys is single and not in a known relationship with anyone. Though, some love spreading rumors that her improving performance is thanks to the support of a secret someone. Others even speculate she has a girlfriend and not a boyfriend. But these are unconfirmed rumors stemming from her vocal support for the LGBTQ community, especially in light of Margaret Court’s controversy.

Margaret Court, an Australian legend in tennis, has been a strong critic of same-sex relationships. Her recent statements on gay players in the sport have sparked an outcry from the tennis community. Keys disagrees with Court’s statements “100 percent” and supports the demand to rename the Margaret Court Arena before the Australian Open. “It’s like, ‘Why can’t we just be nice to each other?'” said Keys, “So frustrating.”

A quick skim through Keys’ Instagram don’t give us any news about her relationship status. This tennis star is like any other girl as we can see on her Instagram. Between training and matches, she hangs out with her siblings, Sydney, Montana and Hunter. Sometimes the Florida native will take a time out for a fun day at the beach with her girlfriends. She also has modeling for brands like Nike, Wilson, Evian and FearlesslyGIRL on her schedule.

It appears that dating is the last thing on Madison Keys’ mind, with her maiden Grand Slam finals up ahead. She’s got her eye on the prize and only fellow American tennis player, Sloane Stephens stands in her way.