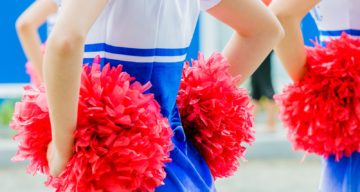 An all-new season of Dallas Cowboys Cheerleaders: Making the Team is here, with a new lineup of rookies vying for a spot on the squad of America’s Sweethearts. The new season premieres on CMT on Friday, September 17, at 9:00 p.m. EST, but the show’s fans on social media are already talking about their favorites. One of the names going around is Madeline Salter. While she is a seasoned dancer like many of her fellow cheerleaders, this talented performer stands out as a legacy cheerleader. Fans are eager to know more about Salter’s family and dance background. So we reveal that in this Madeline Salter wiki.

Madeline Salter was born on March 2, 1998, and hails from Texas. She lived in Dallas and Austin before her family settled in Round Rock.

Maddie Salter, as she’s also known, is the older of two kids born to Michael and Shannon Salter. She has a younger brother, Carson Salter.

It’s her mom Shannon who is also getting attention for DCC: Making the Team. Madeline is a legacy cheerleader in this year’s lineup, as Shannon was also a Dallas Cowboys Cheerleader back in the day. She even featured in the 1990 calendar.

Maddie Salter has been following her mother’s footsteps from a very young age. She has been dancing almost all her life and trained as a cheerleader.

When the family lived in Dallas, she trained at the Top Hat Dance Centre for four years, according to her bio on the Muv Dance & Fitness website. In Round Rock, she joined The Dance Galley and The Dance Spot.

While she danced competitively, Salter also dabbled in modeling and acting as a child. One of her biggest gigs as a child star was featuring in Barney & Friends.

Salter was also a part of the Tigers drill team at Stony Point High School. In her three years on the squad, she served in a leadership role and as an officer.

She graduated from high school in 2017 and enrolled in Oklahoma City University where she majored in dance performance and was on the OCU Pep Dancers squad. She earned her BFA this year in time for her reality TV debut.

Professionally, Salter was part of the American Spirit Dance Company for four seasons. She also spent her summers doing intensives in New York and training with the Rockettes. Upon returning to Dallas, she joined Muv as a dancer and choreographer.

Though she is a rookie and a legacy cheerleader in this season of DCC: Making the Team, Maddie’s Cowboys Cheerleader beginnings were in 2019. She was selected for the training camp and spent seven weeks learning the signature style of the squad. You can see why she’s a fan favorite to make it onto the team.