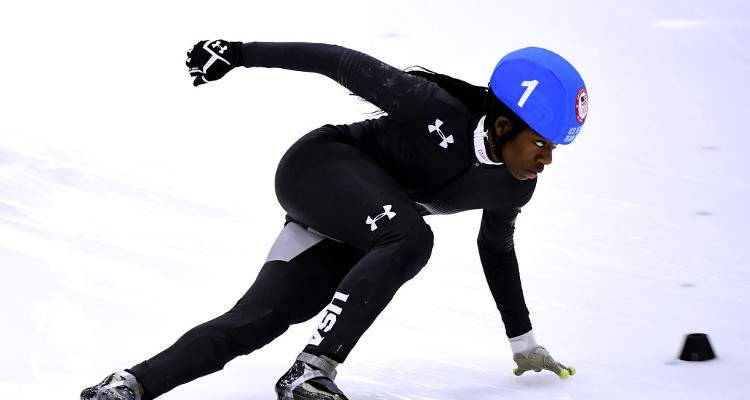 Maame Biney’s age is just 17, but her stamina and strength are something to admire. Biney reached success in the first 500 final at the track trials. She beat other famous athletes like Katherine Reutter-Adamek, Lana Gehring, and Jessica Kooreman.

A top 5️⃣ finish for Maame Biney in Shanghai highlights the day for @TeamUSA. ??

The young athlete is a native of Ghana. She is not only the first from her family to make it to the Olympics, but also the first African American woman to do so!

When the Moment Came

When Biney won and qualified for the speedskating team, she squealed with joy, as she could not believe what happened, “I can’t believe it, aww geez. It’s a really good feeling, but it has to set in first because it takes me a while. I’m like, ‘Holy cow.’”

Out of Maame Biney’s parents, only her father was seated in the stands and closely watched his beloved daughter’s performance. He was her pillar of strength and held up a sign that read, “Kick some hiney Biney.” And she did!

Sometimes, being really excited causes you to lose perspective, and that’s exactly what happened to Biney. When she reached the finish line, she was clapping so hard that she lost her balance and fell. But, she was still laughing as she went down!

Biney set a blistering pace in taking an early lead, which widened as the wild and wooly race went on. As she crossed the finish line of the hockey-sized rink, she began clapping and pumping her arms so hard that she took a tumble!

Later, Biney said about going down, “When I realized that I made the Olympic team, I started cheering like crazy and then I made my epic fall.”

You can watch her performance here.

Biney will be seen at Pyeongchang, South Korea, for the upcoming 2018 Winter Games, which will be held in February. She definitely made her parents and the entire African American community very proud.

Maame Biney’s Instagram and Twitter accounts do not have many of Maame Biney’s pics. Instead, they tend to be more sports-related, highlighting other’s achievements. There are also plenty of quotes and words of inspiration, as well.