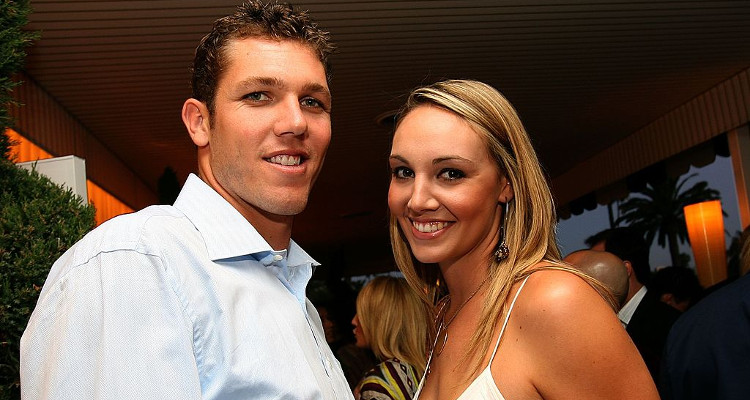 Days after Luke Walton was appointed as the new head coach of the Sacramento Kings in April 2019, he has been accused of sexual assault by sports reporter Kelli Tennant. The attention is now on Walton and his family, especially his wife, Bre Ladd. She stole the attention back when Walton was a player in the NBA. Our Bre Ladd wiki will shed light on Luke Walton’s scandal, right here.

Bre Ladd Is a Volleyball Player from Arizona

Bre Filene Ladd was born on April 19, 1984 to Bob and Tammie Ladd. Together with her older brother, Josh, she was raised in Tucson, Arizona.

She used her fluency in sign language to mentor hearing-impaired students at the Arizona School for the Deaf and Blind. She managed to squeeze in volunteer work between her volleyball schedule.

At Canyon Del Oro High School, she won several Player of the Year accolades and was top-ranked by Volleyball magazine’s Fab 50 list in 2002. She also played for Team USA at the Women’s Junior World Championship.

Ladd majored in community and public health at the University of Arizona where she played for the Wildcats. She holds the record for the most blocks (124) and best blocking average (1.09) by a freshman.

Ladd and Walton Met in College

Walton played varsity basketball at the University of Arizona where he majored in family studies and human development. There, he met a striking varsity volleyball player who majored in community and public health and was planning to attend nursing school.

Walton and Ladd, however, didn’t date until three years later. After dating for seven years, Luke popped the question one Christmas Eve in a really creative way.

“He put a jewelry box inside of a really big box, and I assumed he’d gotten me the earrings I’d asked for,” Bre said in their wedding feature for Brides. “I opened the box and saw my ring, and was so genuinely shocked, even after all that time.”

They Married in Aspen

August 17, 2013 was the date Walton and Ladd chose to tie the knot. They wanted to get married in a place where their guests wouldn’t be sweating in black-tie clothes, so they whisked their over 200 guests to The Little Nell in the ski hub of Aspen, Colorado.

The ceremony was at the summit of the mountain. So the guests, Ladd in a Hayley Paige gown, and Walton in a Tom James suit got ready at the base of the mountain before hopping on to gondolas that would take them to the venue. They exchanged vows with the Rockies in the background and an extra-tall altar the florist had to design to accommodate 6’1″-tall Ladd and 6’8” Walton.

Richard Jefferson was His Best Man

Cleveland Cavalier Richard Jefferson traveled to Arizona with Ladd and Walton. He and Walton were teammates in college and their friendship is pretty legendary, even though they were often on opposing teams. It makes sense that Walton would leave the duties of a best man to Jefferson.

Another noteworthy attendee of the wedding was singer-songwriter Kelley James, who entertained the guests with an acoustic mix of soft rock and rap. The guests threw out topics to him and he improvised hilarious raps, much to the bride and groom’s enjoyment. The highlight for the new bride was when James rapped a song about basketball and their bulldog, Gus.

Shortly after their wedding and honeymoon in Santorini, Crete and Lake Como, Walton retired as a professional player. That year, he began his first coaching job in the league with the Golden State Warriors.

Walton and Ladd are inactive on social media, so there’s not much insight into their day-to-day lives.

After leaving the Lakers, Luke Walton was hired by the Sacramento Kings on April 14, 2019. The following week, news broke that Walton is being sued by sports reporter Kelli Tennant for allegedly sexually assaulting her.

The Kings said they are aware of the complaint and declined to comment until they know more. Walton hasn’t commented so far.