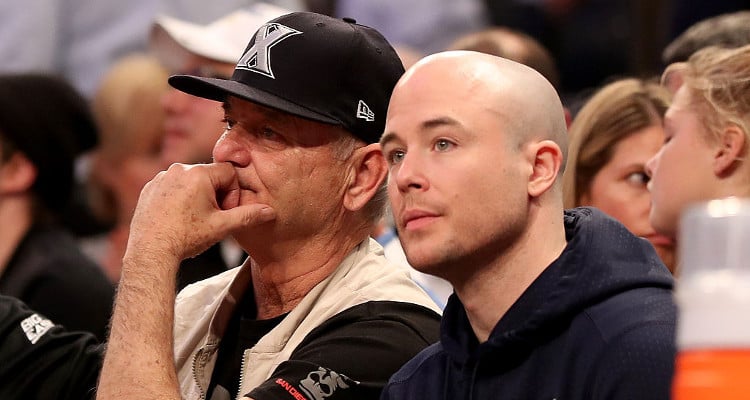 When Bill Murray is not crashing parties, he’s at NCAA matches, specifically matches where Xavier University’s basketball team, the Musketeers, take the court. But he’s not just there for the team. He’s cheering for their assistant coach and his son, Luke Murray.

The Xavier Musketeers will always have a star spectator in the stands cheering them on during the 2017 NCAA tournament. When the Musketeers beat the Arizona Wildcats in Thursday’s (March 23) match, their assistant coach was not the only one rejoicing —Bill Murray was, too! Bill Murray’s son, Luke Murray, is an assistant basketball coach at Xavier University in Ohio, which makes their team Billy Murray’s favorite NCAA team. Seriously, both Murrays looked like March Madness personified when the team won and advanced to face off against the Gonzaga Bulldogs. Find out more about the award-winning comedic actor’s son in Luke Murray’s wiki.

That feeling where your bracket is busted to all hell but you don't give a damn as your squad is headed to the #Sweet16. ???? #MarchMadness #BustedBracket #NCAATournament #CollegeBasketball

His Parents Got Married on Super Bowl Weekend

Bill Murray was filming the 1981 military comedy, Stripes when he married Margaret Kelly, a former talent coordinator on the The Tonight Show and The Dick Cavett Show. It was a Las Vegas elopement engineered by the actor during Super Bowl weekend, when no one’s attention was on anything but football. They followed it with a formal ceremony in Chicago in the presence of friends and family.

The couple have two sons, Homer and Luke, but later divorced in 1996 when it came to light that Murray was having an affair with Jennifer Butler. Murray later married Butler, whom he has sons Caleb, Jackson, Cooper, and Lincoln with. They divorced in 2008 with Butler accusing him of domestic violence, infidelity, and an addiction to drugs.

His Father’s Love for Sports Pushed Luke to Basketball

Bill Murray knows how to make people laugh and is a standout actor. But he’s first and foremost a die-hard sports enthusiast. Not only did he star alongside Michael Jordan in Space Jam, but he also showed some impressive play for a few minutes in the movie. Though Luke loved his father’s movies, working in Hollywood was never his dream. It was Bill’s love for sports that motivated a young Luke to coach basketball.

At 13, Luke was living with his mother after his parent’s divorce, but still frequently saw Bill. During this time, he developed a fascination for high school and college basketball. Luke asked his father to drop him off at the prestigious ABCD Camp, a place for young players gifted with extraordinary basketball skills.

Also Read: Why is Bill Murray an Xavier Fan?

“It was close to my house [in Nyack], so I’d go over there and watch Tracy McGrady and all the stars who have come through there over the years. I’d hit the little Burger King at lunch.” Luke said recalling the time his father would catch the action at the gym when he came to pick up little Luke in the evening. One person the Ghostbusters actor would talk to was Emmanuel Richardson, the assistant coach at Arizona who Luke’s team played against last night (March 23).

Growing up my Dad always taught us that @BillWalton was the greatest college basketball player of all time. Honored to have met him today! pic.twitter.com/VxX6Hm00Cz

His Coaching Career Began as a Student

Luke Murray’s career began when he was a master’s student of educational psychology at Arizona under Coach Sean Miller. His Xavier’s profile states that he was a staff member of Towson University in Maryland and Wagner in Staten Island under Coach Pat Skerry.

He then spent two seasons as an assistant coach at Rhode Island with Dan Hurley, whose father was Bob Hurley, another famous coach. Murray spent two seasons on the coaching staff of the Xavier Musketeers. Coach Chris Mac called Luke one of the top young coaches in America saying, “His efforts here so far and at Towson and URI have demonstrated his ability to both attract talented players and coach them successfully. I have known Luke for a number of years and it is evident he has a passion for Xavier Basketball.”

His Wife is a Coach, Too

The 31-year-old married Kara Cassidy in 2015 in a grand ceremony held at Cassidy’s hometown of Philadelphia. Bill Murray wasn’t able to accept his Emmy for Olive Kitteridge that night because he was present at his son’s wedding.

Luke Murray met Cassidy when each were assistant coaches to their respective teams, before taking their romance off the court. Cassidy was an assistant coach of the University of Pennsylvania women’s basketball team. She was a graduate of Pennsylvania and her coach invited her back to her alma mater to assist her with the team.

Reports indicate that Cassidy was a director of sales for a major corporation at the time of their wedding, though it is unknown whether or not she still holds that position. The couple currently live in Cincinnati, very close to Murray’s workplace.

He Tried His Hand at Acting

When your father is a celebrated actor, it’s only natural to want to give acting a shot, too. Luke Murray worked on a couple of movies before becoming a full-time coach. He has an IMDB page that credits him as an actor in the 1998 thriller, Naked Frailties and the 2001 TV movie of Arthur Conan Doyle’s novel, The Lost World.

Bill Murray’s eldest son, Homer Murray, also did a little acting, appearing in his father’s comedy-drama, Broken Flowers. Both sons have played minor roles, but have ultimately decided the world of acting is not for them. While Luke coaches college basketball, Homer opened his own bar in Brooklyn.