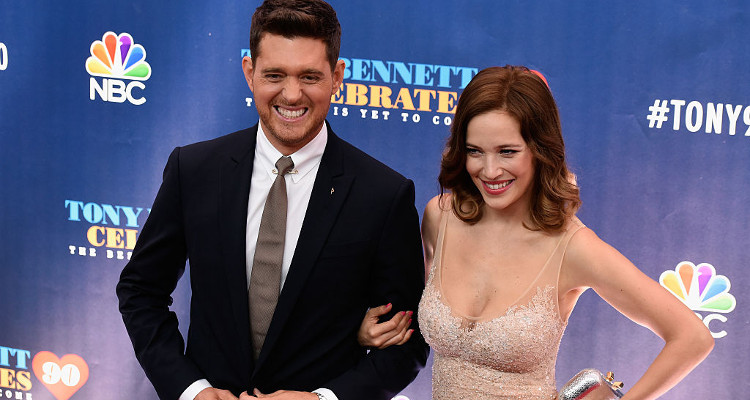 Luisano Lopilato and her husband, Michael Bublé, will be taking time off their work to focus on their eldest son’s health. While Bublé will take a break from his music, Lopilato will put her acting and modeling career on hold.

Back in November, Michael Bublé revealed that his eldest son, three-year-old Noah Bublé, is battling cancer. Bublé and his wife, Luisana Lopilato, are putting their busy work schedules on hold to focus on Noah and their infant son, Elias. Fortunately, the Bublé’s have confirmed that little Noah has a 90% chance of survival and he will be home for Christmas. Meanwhile, many want to know about the beautiful lady that stole Michael Bublé’s heart. Here are some facts to know about Luisana Lopilato, who is Michael Bublé’s wife of five years.

#1. Who is Luisana Lopilato?

Lopilato is an Argentinian model and actress born to Eduardo and Beatriz Lopilato, in Parque Chas, the smallest district in Buenos Aires. She was raised in Buenos Aires with her brother, Dario Lopilato and sister, Daniela Lopilato. According to her bio, she’s the youngest of the three children. The 29-year-old embarked on her career at a very young age. She began as a child actor in Latin shows and even pursued a singing career at the age of eight.

When Lopilato was six, she was out with her mother when a casting director approached them. He asked if Lopilato could audition for a commercial, to which her mother declined. But the casting director was relentless and he made a phone call to the Lopilato household. Eduardo Lopilato answered the call and was very enthusiastic about the audition. He took his youngest daughter to the audition where she got the job and began her career.

As she grew older, Lopilato branched out into modeling. She has modeled for lingerie brands Promesse and Ultimo, and companies like Coca Cola, Gillette, McDonalds, L’Oreal, 47 Street, and many more. Now she’s a well-known personality in Argentina, earning a net worth of $2.0 million.

#2. She is a Famous Actress in Latin America

Luisana Lopilato made her debut in the TV series, Mi Familia es un Dibujo (1995) as child. In 1999, she played the role of Luisana Maza in Chiquititas, a popular television series created by award-winning Latin TV producer, actress, writer, and musician Cris Morena. Lopilato signed with the Cris Morena Group and released four albums as part of the Chiquititas soundtracks . She also starred in a spin-off film of the series.

In 2002, she starred as Mia Colucci in another Cris Morena show, Rebelde Way. Her other works include Los Pensionados, Casados con Hijos, Alma Pirata, RIO, and Lobo. Her most famous work to date is as Nina Lacalle in Attraccion x4 which also starred her brother.

Bublé and Lopilato are now happily married, as Bublé had hoped when they first met. Michael Bublé revealed in an interview that the first time they met, Lopilato had mistakenly thought he was gay, and Bublé’s response was “You are my wife, you just don’t know it yet.”

In an interview with Pridesource, Bublé spoke of their first meeting at a party following his concert in Buenos Aires. Lopilato was with a handsome male actor, who Bublé thought was the Argentine beauty’s boyfriend, “I naturally assumed that this was her boyfriend or her husband, so I refused to hit on her. And listen, it didn’t help that she didn’t speak English either at the time.”

But after a little liquid courage, Bublé tried to find out about Lopilato and her friend, “I finally said, ‘You guys are such a beautiful couple,’ and he said, ‘We’re not together.’ He said, ‘She came because she likes you.’ And at the same time, she was on the phone texting her mom saying, ‘Oh my god, Michael Buble is all over my friend. He’s so gay.’”

Though Lopilato assumed the singer was gay, her response to his bold pseudo-proposal was,  “Of course you want me to be your wife, every man wants to marry me, so we will have to see!”

Months later, Bublé e-mailed Lopilato asking to get to know her, and meet her family. Their first official date was dinner with the Lopilato family in their home. Despite not speaking English, they all loved the humble and charming Bublé.

Luisana Lopilato appeared in Bublé’s music video, “Haven’t Met You Yet” in 2009, the same year they got enganged. They were married in 2011 at a ceremony in Argentina. Six months later, the couple announced that they were expecting their first child, and posted the ultrasound video online. Noah Bublé was born in 2013 in Vancouver, and Elias Bublé was born in January 2016.

After launching her singing career for the soundtrack of Chiquititas, Lopilato formed a pop-rock band called Erreway with her co-stars from Rebelde Way. Cris Morena chose the show’s four lead actors, Benjamín Rojas, Luisana Lopilato, Felipe Colombo and Camila Bordonaba to form the band. The group released three albums but broke up in 2006, after five years of performing together.

#5. She Learned English for a Film

Lopilato’s first film role was in the film, Un Amor en Moises Ville in 2001. The role required her to record dialogue in both Spanish and English. Lopilato didn’t know English, a fact that the film’s crew wasn’t aware of. She had to admit she didn’t know English, so the production company hired an English coach to help Lopilato film her English speaking scenes.