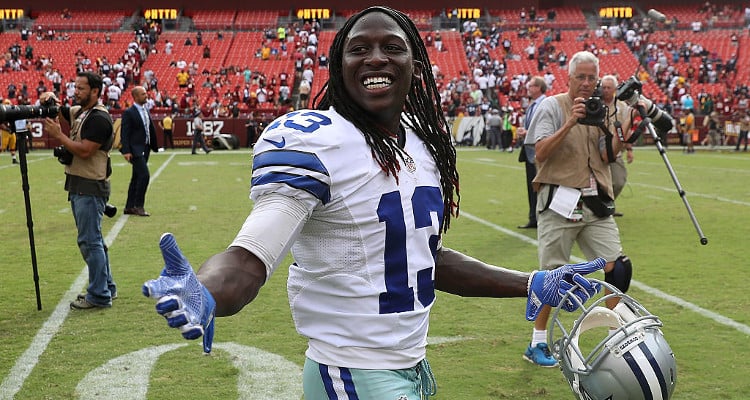 Lucky Whitehead’s name is proving to be slightly unlucky for him. The 25-year-old Dallas Cowboys wide receiver is wanted by police after he didn’t show up for his court appearance. If you want to know a little more about why Lucky Whitehead was arrested, then feel free to look at our Lucky Whitehead wiki.

Not so lucky after all! In June, the Dallas Cowboys player was arrested for shoplifting from a convenience store in Virginia. However, he is now in hot water after he failed to show up in court for his hearing.

Whitehead was arrested on June 22 after he was caught stealing from a Wawa in Woodbridge. His court date was scheduled for July 6, but now a warrant is out for Whitehead’s arrest for failure to appear.

According to sources, Whitehead shoplifted products totaling less than $200.00 and ran out of the store without paying for them. The William County Police issued a statement about the event:

“On June 22 around 1:30AM, officers responded to the Wawa located at 2051 Daniel Start Sq in Woodbridge to investigate a larceny in progress. An employee reported to police that a man ran out of the store without paying for some merchandise. When officers arrived, they located the man in the parking lot. Following the investigation, the accused, identified as Rodney Darnell Whitehead – age 25, was charged with petit larceny and released on a court summons.”

Now, there’s twist in the story. Whitehead’s agent, David Rich, said that police never arrested Whitehead, which is why he did not show up for court. Rich further added that Whitehead was not even in Virginia at the time of the incident.

If you do not know who Lucky Whitehead is and want to know more facts about him, we have you covered!

Born Rodney Darnell Whitehead Jr. on June 2, 1992, Lucky Whitehead’s age is 25. He was born in Manassas, Virginia to Rodney Whitehead and Karen Morris. His nickname “Lucky” was given to him by his cousin.

Whitehead is extremely close to his dog, Blitz. In July 2017, the football player took to Instagram and announced that his dog was kidnapped and held for ransom. The next day, Whitehead revealed on Snapchat that his dog was safely back with him and that he had to pay an undisclosed amount.

In 2013, he transferred to Florida Atlantic University. Since he was a senior, Whitehead was the team’s slot receiver. Throughout his college career, Whitehead registered 76 receptions for 706 yards and six touchdowns.

After the 2015 NFL draft, Whitehead signed with the Dallas Cowboys to play as an undrafted free agent. He learned a lot and developed new skills while playing for the Cowboys until 2016.

Lucky Whitehead Was Released from the Team

Whitehead has another court hearing on August 10. When he was asked about the arrest after training camp practice on Monday (July 24), he said he knew nothing about it. Cowboys coach Jason Garrett learned about his arrest on Monday, and met with Whitehead to explain the organization’s decision to release him from the team.

Garrett said, “As we gathered more information on that particular situation and conversations we had with Lucky about that particular situation and we put into context with his career with us over the last year or so, we just felt like the best decision for the Dallas Cowboys was to release them.” He further added, “When you have someone in your program, in this environment, in this structure, and they don’t grow and develop and they make the same mistakes over and over again, it’s time to move on.”