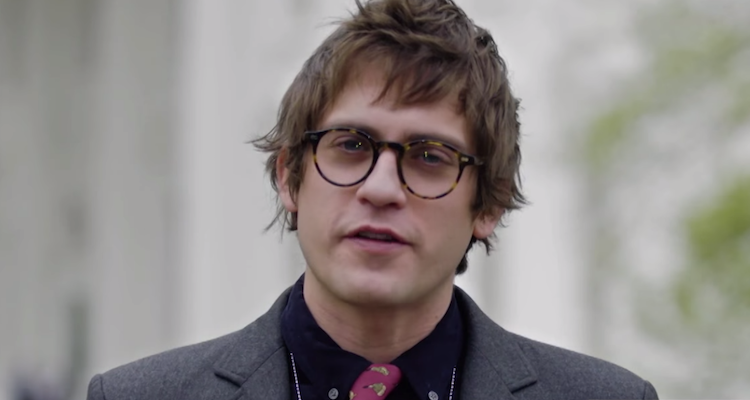 Unless you have been following right-wing reports that routinely cover President Trump’s term in the White House —that is, up until the point that Lucian Wintrich was arrested— you may not have noticed his name. In this Lucian Wintrich wiki, we’ll try to answer the question: Who is Lucian Wintrich? We’ll look at his life before being a White House correspondent and the issues that may have lead up to his current arrest. By the time we’re done here, you should know all that you need to about Lucian Wintrich.

Born Lucian Einhorn on May 24, 1988, Lucian Wintrich’s age is 29. Much of his father’s side of the family were killed by the Nazis during World War II. His grandfather, Jerzy Einhorn, was a leader in the Polish resistance. Wintrich was born in Pittsburg, Pennsylvania and grew up in the Squirrel Hill area. He began carving out a public persona very early in life as he launched a crowd-sourced news website in grade five, and a podcast called Acorns and Merlot while still in high school. At age 18, he legally changed his name from Lucian Einhorn to Lucian Baxter Wintrich IV as an effort to protect his family from future controversies, and to help keep his name higher up in Google’s algorithms. Much to the chagrin of some right-wing ladies, there is no Lucian Wintrich girlfriend as he is openly gay and was reportedly dating a man named Brian in April 2017.

College Years and Beyond

Wintrich attended Bard College where he earned his B.A. in political science. While at Bard, he began to really delve into right-wing political views. He gained the most attention with a photo exhibition called “Twinks4Trump” during Cleveland’s Republican National Convention, and then in New York. Along with fellow controversial conservative Milo Yiannopoulos, Wintrich was an alternative to the traditional Republican stereotype of stuffy old white men. He stated that he believes it was these types of political actions that led to his termination for a job at the Anomaly advertising firm. With the terminations, he went into right-wing journalism full-time and quickly began writing for Gateway Pundit. After Trump’s inauguration, Wintrich was made Gateway Pundit’s White House correspondent. His weapons of choice tend to be his work with the pro-Trump website, as well as Lucian Wintrich’s Twitter.

“Sean, you never called on me but I still loved that spice.”

Yesterday evening, the University of Connecticut’s College Republicans student group held an event called “It’s OK to Be White,” where Wintrich was the main speaker. Needless to say, many in the crowd were loud, hostile, and confrontational towards Wintrich and his views. What happened after he finished speaking may depend on your view of things. A woman came up to the podium and grabbed a set of papers (Wintrich stated that it was a copy of his speech) and then set about leaving. He pushed and grabbed the woman leading to a commotion breaking out. The police quickly swooped in and broke the disturbance up before things could get out of hand. Wintrich claims that he was just trying to retrieve his speech. But he was charged by police with breaching the peace. He was booked, complete with a mugshot, and has since been released. A student that attended the event was also arrested for breaching the peace and criminal mischief.

Right-wing talking heads like Ann Coulter have quickly come to Wintrich’s defense, claiming that he was just trying to take back his own property and that it was his right to retrieve his speech in that manner.