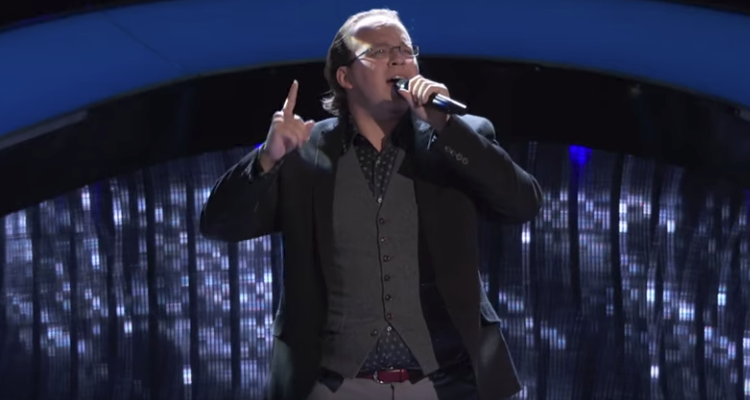 Guess who’s back!? For contestant Lucas Holliday, The Voice was a dream come true and ever since he hit the stage during his blind audition, there was no denying his voice was one in a million. Now, he gets another shot at making his dream come true. While not much is known about Lucas Holliday’s family, we have everything you need to know about the contestant, right here in our Lucas Holiday wiki.

Who is Lucas Holliday?

Lucas Holliday’s age is 26 and he’s from Lansing, Michigan. He worked as a cashier at Dollar General, a local convenience store. He’s known as the “singing cashier” because he soulfully sings as he checks out his customers at the register! According to his NBC profile, “Customers are often surprised that his look does not match his vocals. Last year, one of Lucas’ friends recorded him singing “Ascension” by Maxwell at work, and posted it on social media. By the end of the night, the video had 100,000 views and went viral with more than 1 million views in the first week. All of sudden, Lucas was invited to sing with Maxwell in front of a sold out crowd of 20,000 people.”

Lucas Holliday at the Playoffs

Holliday was a strong contestant but unfortunately, was eliminated sooner than he would have liked.

“This knockout round is so important to me, because I don’t want to go back to Lansing ringing people up at the local Dollar General,” Holliday said on the show ahead of one of his performances.

Holliday faced off against Meagan McNeal, 31, and although it was hard for Hudson to choose, she ultimately chose Holliday.

“First of all, I am so proud of both of you,” Hudson said after their performance. “The way you commanded the room, you turned it into a club. We got down! What I appreciate most is you stayed true to who you are, that goes for you both and that’s what makes it so hard for me to make my own decision.”

Before Holliday was eliminated, he was on Jennifer Hudson’s team and sang his heart out until the very end. Now, he’s back for the Playoffs and his fans couldn’t be happier! He was chosen as one of the “comeback artists” on the show and now he has to prove that he belongs on the stage.

“Ladies and gents, boys and girls….YOUR COMEBACK ARTISTS FOR SEASON 13 OF THE VOICE!!!!!!!!! That’s right, I will return alongside JHud’s Top Five for the Play Offs!!! Get ready for the next step, starting Monday November 13 at 8pm!!!!” Holliday wrote in a Facebook post on Thursday afternoon.

If you are looking for Lucas Holliday’s pics, then head over to his Instagram account. He has photos of what projects he’s working on, his daily life, and his big return to the show.

“It sure is a lovely feeling when your Voice coach says she’s bringing you BACK for the PLAYOFFS!!!!! Thank you @iamjhud for believing in me enough to have me return to the stage one mo ‘gin! S/O and so much Love to the three beautiful, gifted and signature songstresses to my right!”

Will Holliday get a chance to redeem himself tonight? There’s no telling what will happen but at least Hudson gave him a second chance to wow the viewers!

The Voice airs on Mondays and Tuesdays at 8:00 p.m. EST on NBC, so make sure you tune in tonight!