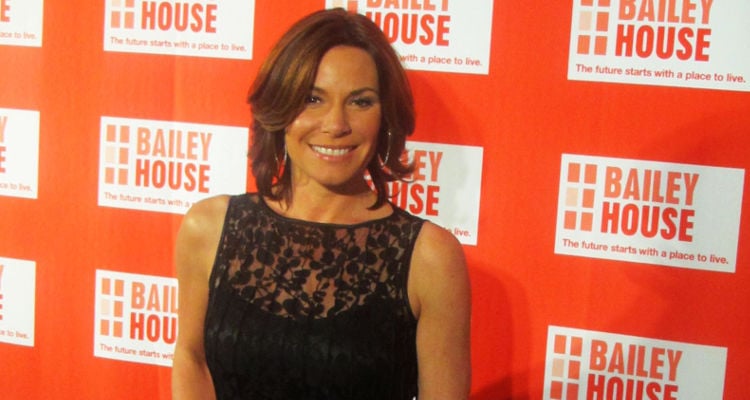 The season 8 finale of The Real Housewives of New York may have aired last night (Wednesday, August 24), but that doesn’t mean the drama is over. For all the fans of RHONY frantically searching for terms like, “LuAnn de Lesseps fiance,” “LuAnn de Lesseps net worth,” “Thomas D’Agostino jr wiki,” “unfaithful,” and “cheating,” we’ll give you all the juicy details you’re dying to know about LuAnn de Lesseps’ cheating fiance, Tom D’Agostino right here.

The question on everyone’s minds is, “Who is Tom D’Agostino Jr.?” Fans of RHONY know him for his devotion towards Lesseps, but there’s more to him than just being the perfect husband-to-be. The lovebirds were initially introduced by a mutual friend, RHONY star Dorinda Medley last year, and sparks flew instantly when they reconnected. Their relationship blossomed quickly, and the happy couple got engaged in February 2016. Apparently, Tom was too impatient to wait till Valentine’s Day and popped the question to the TV personality before they left for a romantic vacation in Vail. He presented her with an eight-carat canary yellow diamond ring, and they celebrated their engagement with a ski vacation in Colorado. Lesseps is one lucky woman!

So, what does Thomas D’Agostino Jr. do for a living? Well for starters, the 49-year-old is the President of Smart Source L.L.C, which is a print and promotional distributor promising a one-stop shop for any company looking for a way to manage branded communication expenses. According to LinkedIn, he’s been in the business for 12 years. The company is even reported to be worth $50 million! Meanwhile, Lesseps’ net worth is estimated to be around $15 million. Tom is known to be a jet-setter, and owns a place in New York City as well as Palm Beach, Florida. His work takes him all around the world. Tom is an avid golfer and skier when he’s not working. As for his dating history, there’s an interesting connection to another RHONY star. Apparently, the Manhattan business mogul dated Ramona Singer briefly in 2015. They were reportedly seeing each other for a few months, but it was not exclusive because Singer was not looking to settle down.

Before you start thinking that D’Agostino Jr. is the perfect man, read on to find out what high-voltage drama went down with the couple who is scheduled to get married on new year’s eve. Well, if you haven’t been following RHONY, we’ll fill you in on all the latest updates. Apparently, Lesseps’ fiance was a bad boy and was caught making out with an ex-girlfriend. Yes, we were as shocked as you are right now! Allegedly, Tom stormed out after an arguement with Lesseps the night before their engagement party, and hit the Regency Hotel bar to have a quick drink to calm himself down. Apparently he needed a tall drink of the past, as he was subsequently photographed kissing an ex! This fact was unceremoniously revealed to Lesseps by her ‘frenemy,’ Bethenny Frankel. Ouch!

However, there is no need for fans to be upset about this bump in the road. The engagement is still on. In an interview, Lesseps said, “I’m not going to let a stupid kiss ruin the rest of my life. He screwed up. What he did was wrong. But this wasn’t premeditated. It wasn’t an affair. It was a mistake. He was upset with me. It was a stupid retaliation of some sort. He did the wrong thing, and he totally recognizes that. I know in my heart of hearts that he loves me.” On his part, D’Agostino apologized for his indiscretion saying, “If I could take it back, I would. I deeply regret the mistakes I’ve made, and most of all hate the way it hurt LuAnn.” Let’s wait and see whether or not this couple makes it down the aisle!